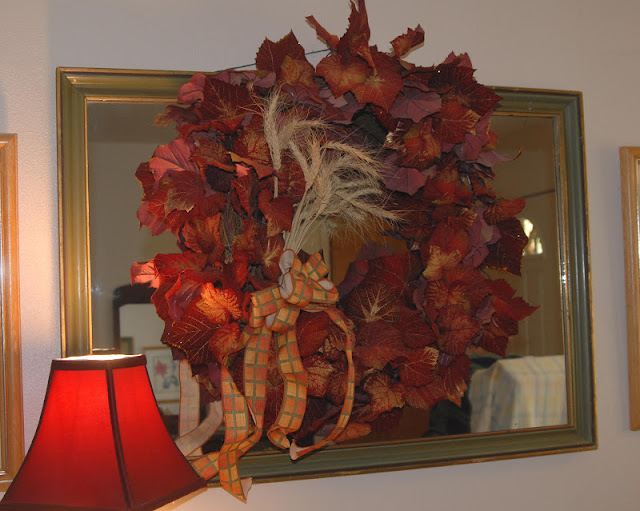 It's lovely to awaken one morning, go upstairs to uncover the canary and give him breakfast, and then discover something so unexpected, so lovely and bright. 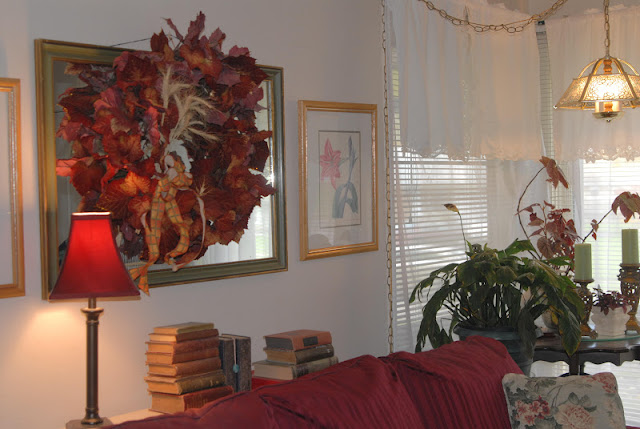 The Caro Elf had been at work, way in the night, making and hanging and distributing beautiful spots of BRIGHT all over the house.   We'd had a dried wreath on this mirror years ago, and  I'd not have  thought to hang one so large and imposing, but it's just amazing over the burgundy couch, with all the rosy lampshades and florals. 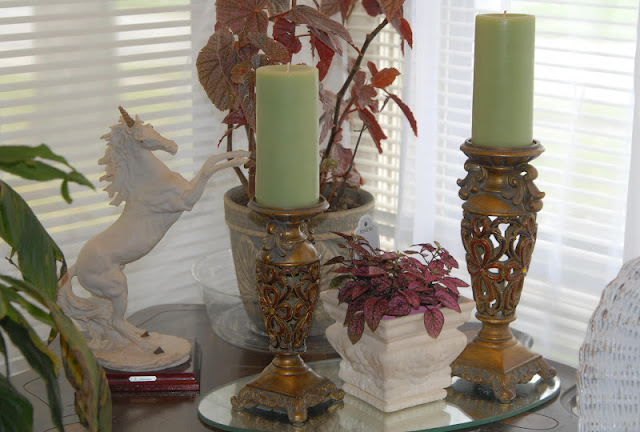 And another important part of Autumn:  the Bringing In---all the flowers put outside in shade or sun, to soak up all of Spring and Summer they can absorb.
Unfortunately, quite a few of these were quite injured by an immense hailstorm last month, attested by the forlorn, lacy leaves still untrimmed. 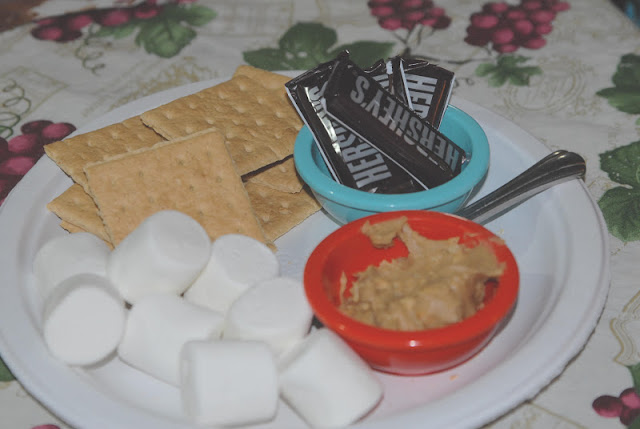 We went outside on the first sunny day and made S'Mores, with a little pan taken from inside the grill, filled with a few charcoal briquettes, and set on an old metal chair.   We toasted and torched and smushed and giggled, each to his own, scraping and sticking and getting all kinds of messy, and it took two trips into the house for wet washcloths to keep us from sticking to the furniture.

Sweetpea is a purist---she'll toast away, holding anybody's stick over the fire til it's like you like it, rotating carefully and getting the marshmallow just so, but she likes hers as Nature made them---two graham crackers with some squares of Hershey Bar and an un-toasted marshmallow---all left cold.

It's quite a feat to eat that, with crumbs and snaps resulting, but it's her way---she won't hear to having any of hers melted.

Chris is an Extra-Crunchy Jif kinda guy, with a nicely browned marshmallow, just gooey ENOUGH to ooze out with the chocolate as you squeeze the halves together.

Mine "Well Done," please---a veritable torch-on-a-stick, before blowing out and scraping that  scrumptious burnt-mallow ooze onto the cracker, with all the crunchy black bits of sugary WOW.
That long-remembered taste of the outdoors, the crisp of the air, the susssssh of leaves underfoot, the wavery stretched-out coat hanger dipping toward the coals, and that dark familiar crunch between your teeth of the charred crumbs---incomparable.


And a wonderful, sunny Pink/Autumn Saturday to all!!
Posted by racheld at Saturday, October 20, 2012

it is FUN :)
WELCOME
Håkan ( The Roseman)

We used to have marshmallow roast when growing up. I am sure it was more primitive than how they do it now.

It all sounds so lovely and fun!
I've never tried a s'more with peanut butter, sounds yummy.

Oh, what a pretty room, Rachel! It just beckons you to come sit a spell ...

What fond memories your marshmallow-toasting story rekindled ... I like mine well done, too.

You know I did not know about the two crackers (savary biscuits)with the marshmallow and chocolate between.......Us Aussies are so boring!!! :)

Hugs to you my friend.

Good morning Rachel, A fine morning to be lazy and catch up with my dear blogging friends. The wreath and fall touches are so pretty. So is your lovely home. Good job Caro.

Nothing says welcome to cooler weather as S'Mores. Sweetpea has a mind of her own and her little ides on how to do lots of things her way always makes me smile.

Honestly Rachel when you described how you like your marshmallows toasted, it just made me laugh out loud. I too will toast mine black and peel off the crust only to toast it again. We are sisters of the soul. Smile!!!

I'm in with you and Jeanne on the burnt marshmallow, but I with Chris on crunchy Jif peanut butter. I would say we would make quite the team.

Happy Pink Saturday, my sweet friend. I love it when you join. Your Caro is just the best of the best.♥♥♥

Lucky you, to have a Caro elf! And I’ve found another taste that we share! I, too, prefer my marshmallows incinerated! As for Sweet Pea and her preference – have you seen the Kraft marshmallows that are specifically for S’mores? They are very flat and square and would help, I think!