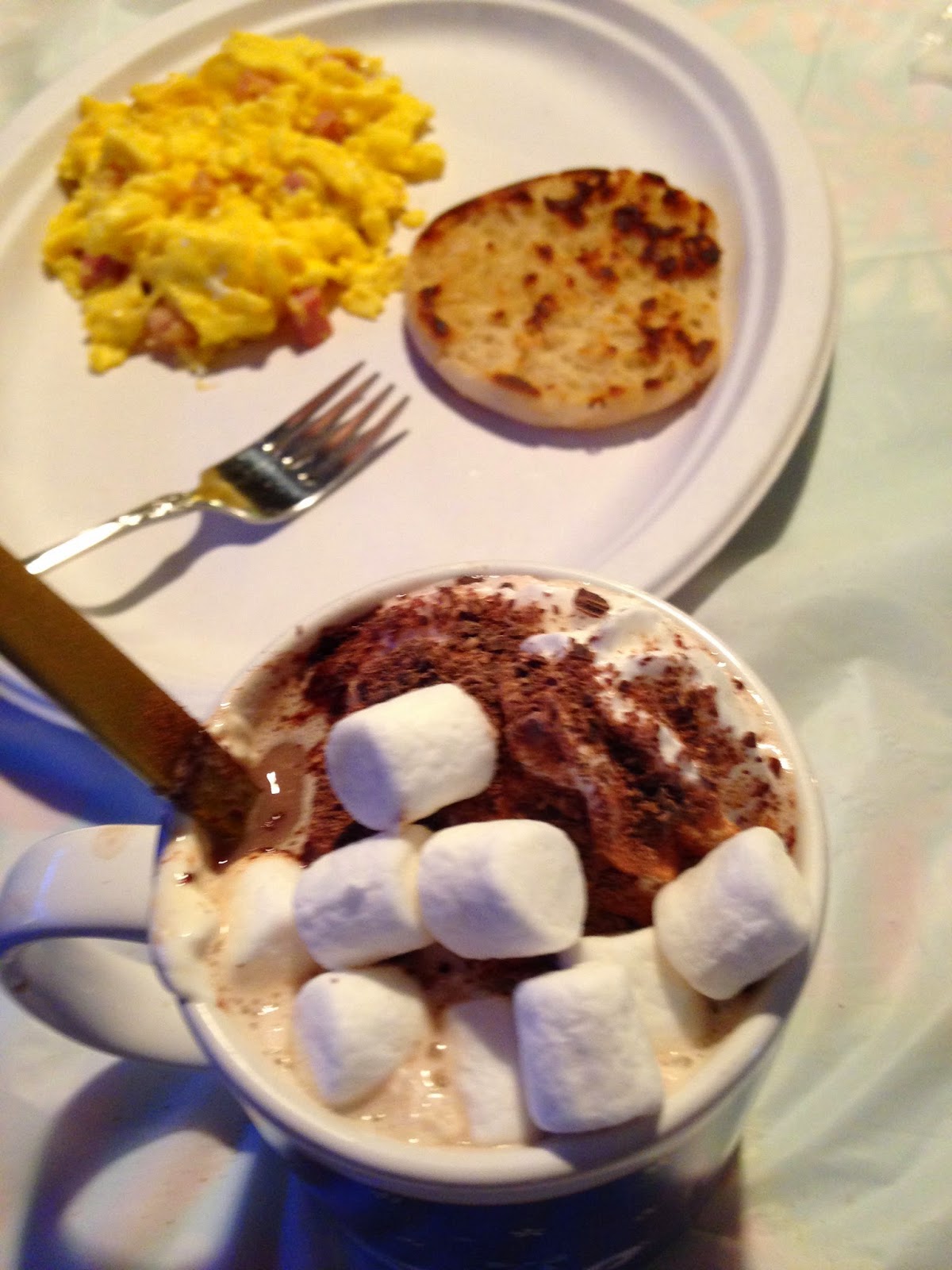 Wishing a fine and good morning to all, whether you’re finishing up, digging out, settling in, making do, settling down, revving up, or simply enjoying the day.

From a “snow day” a couple of weeks ago---any Grandmother worth her Morton's ought to know that being snowed in with a seven-year old who has “built” her own cocoa with marshmallows and a shaker of shaved chocolate is going to be QUITE the lively companion.  She was zipping around like a firefly, from one book to another craft and yet another dancing dress, and if she’d been allowed one of the charming “chocolate spoons” Caro put into everyone’s stockings, she would not have needed her Mama to come drive her home at the end of the day.

She’d have been out the door, Elsa hat crammed on like Ignatius Reilly and a trail of dropped mittens in her wake, those small pink boots just  rattling off down the road.
Posted by racheld at Wednesday, January 28, 2015 10 comments: 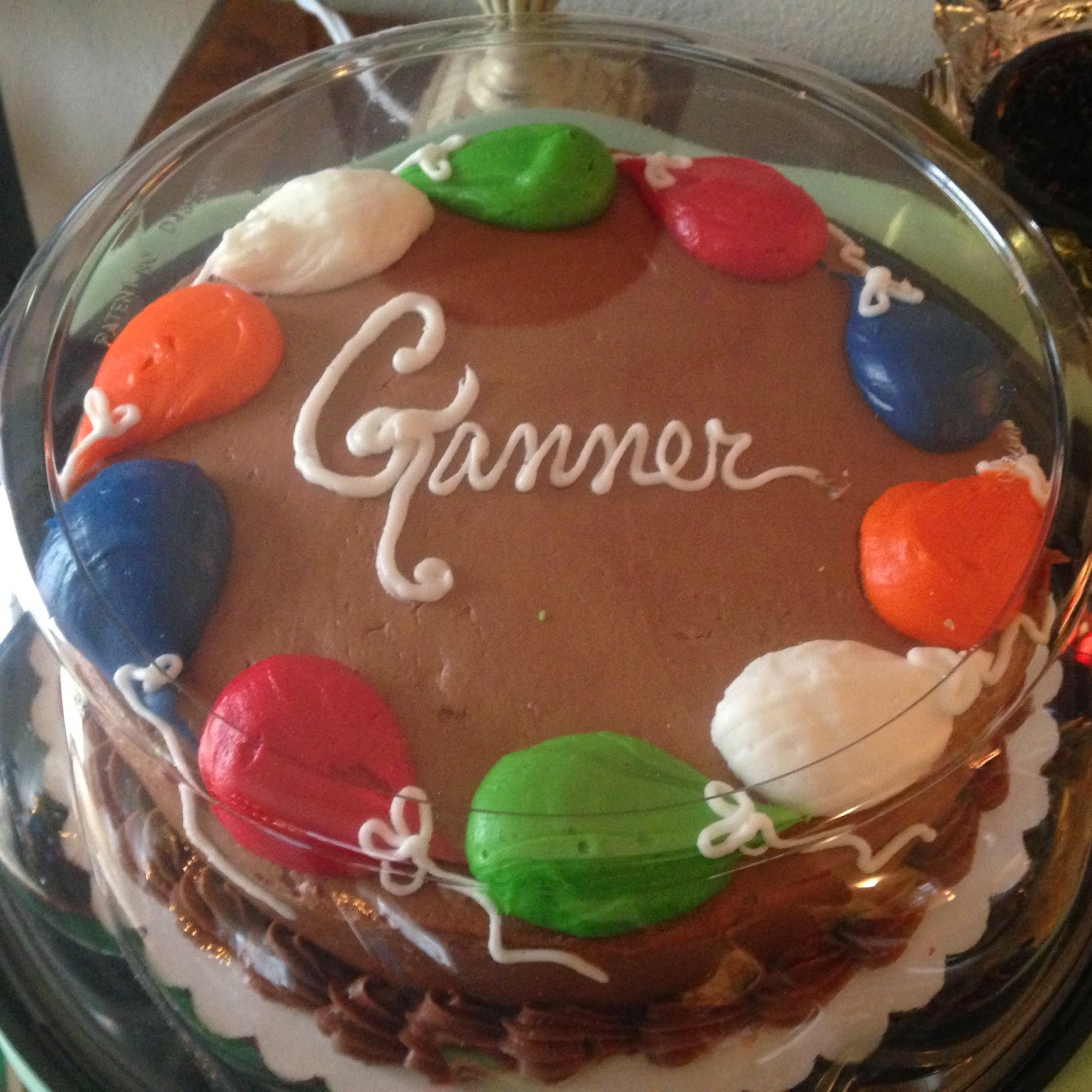 We’ve been celebrating Chris’ birthday for several days now, and had a little family gathering for Brunch yesterday.   Caro did all the food, including the cake. 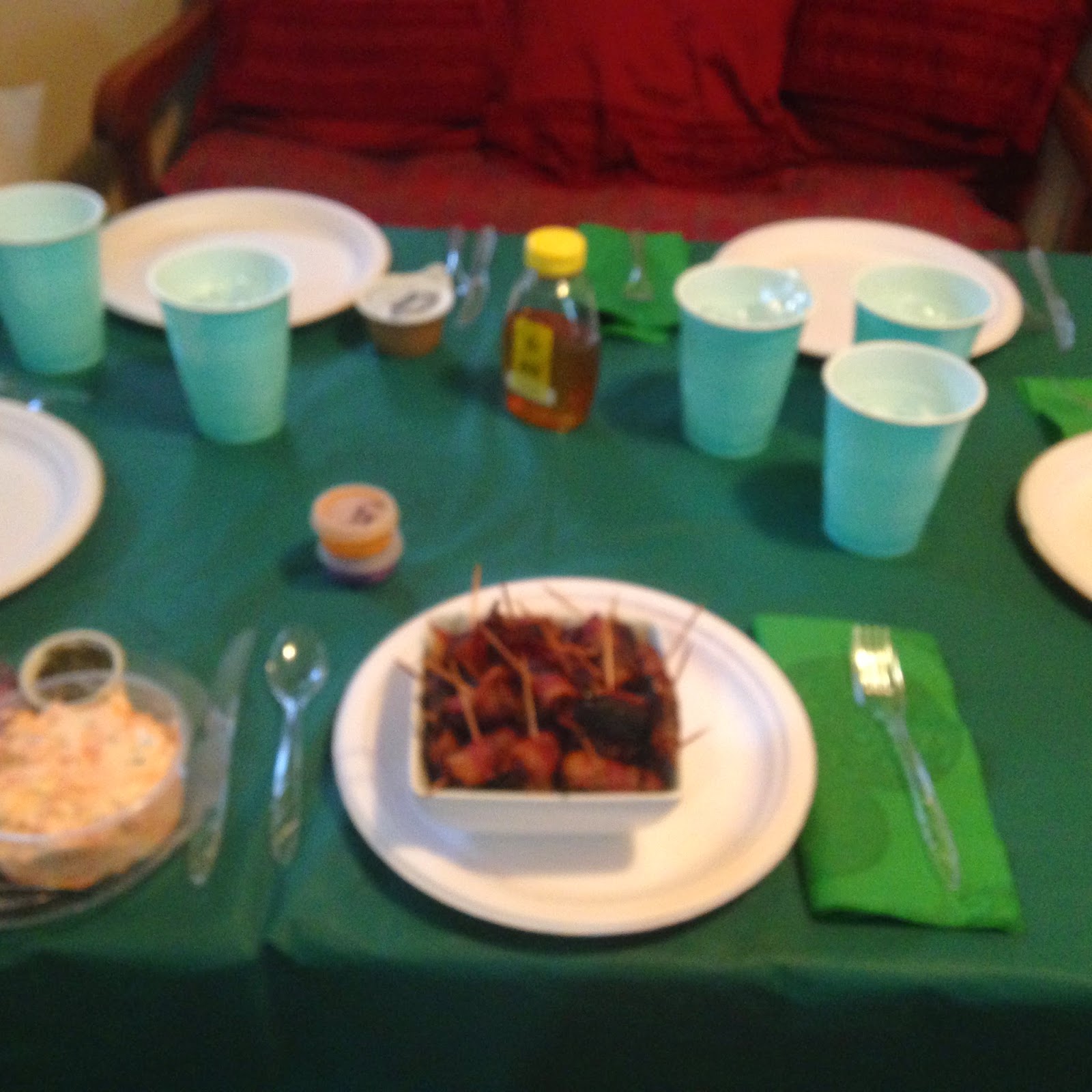 Sweetpea set the table, choosing an assortment of paper and plastic from our stash, including glasses left from her FROZEN party last Summer.  (Funny, they must be the jinx, for THOSE pictures were kinda fuzzy as well).

There were Bacon-Wrapped Dates and at left is a little dish of Salmon/Cream Cheese Spread, with a garnish of Red Onion and Capers. 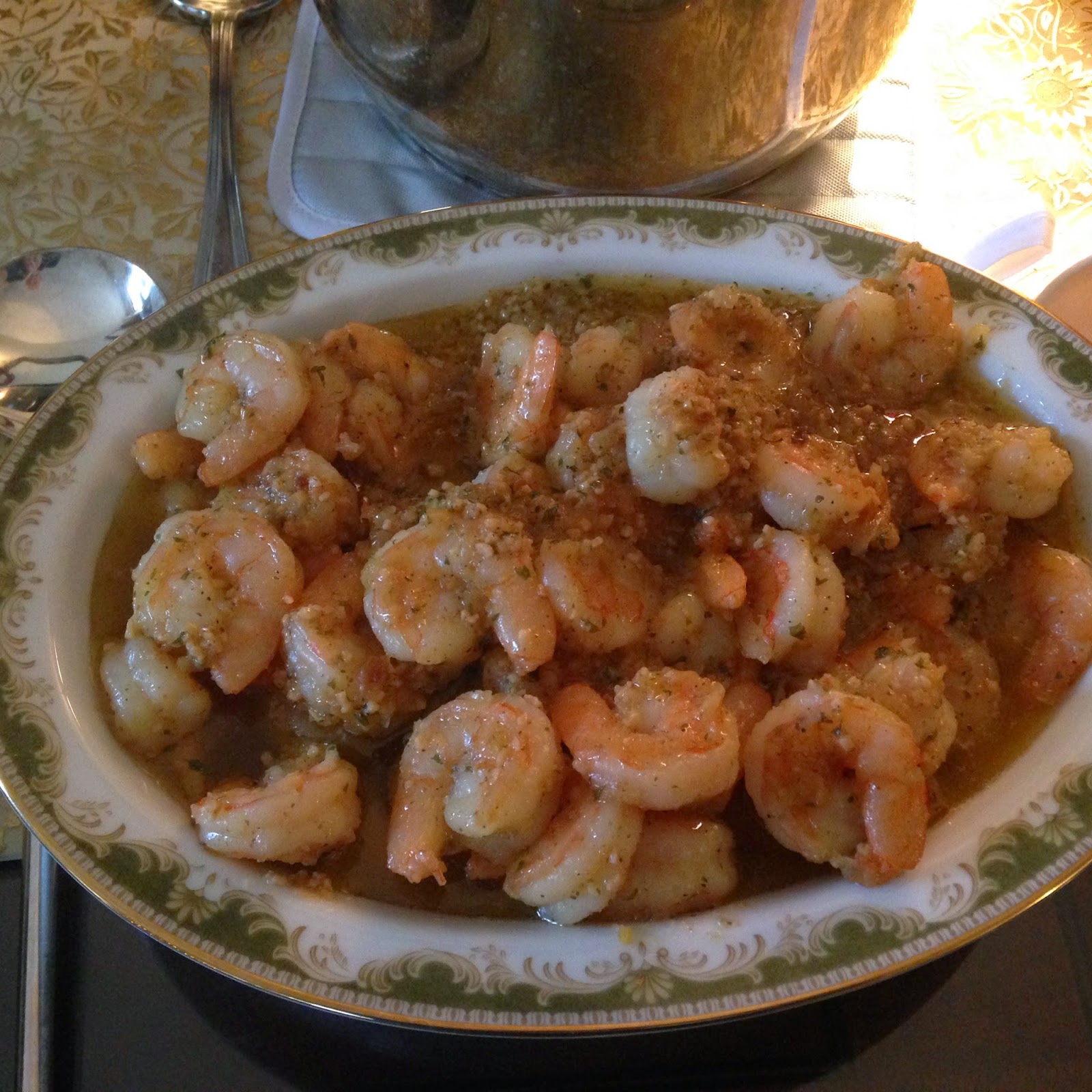 We had a lovely bowl of Shrimp in a Beer/Garlic/Minced Onion/Butter Sauce, to go over Grits.   Can you SEE all that tiny onion and garlic and Cajun seasonings? 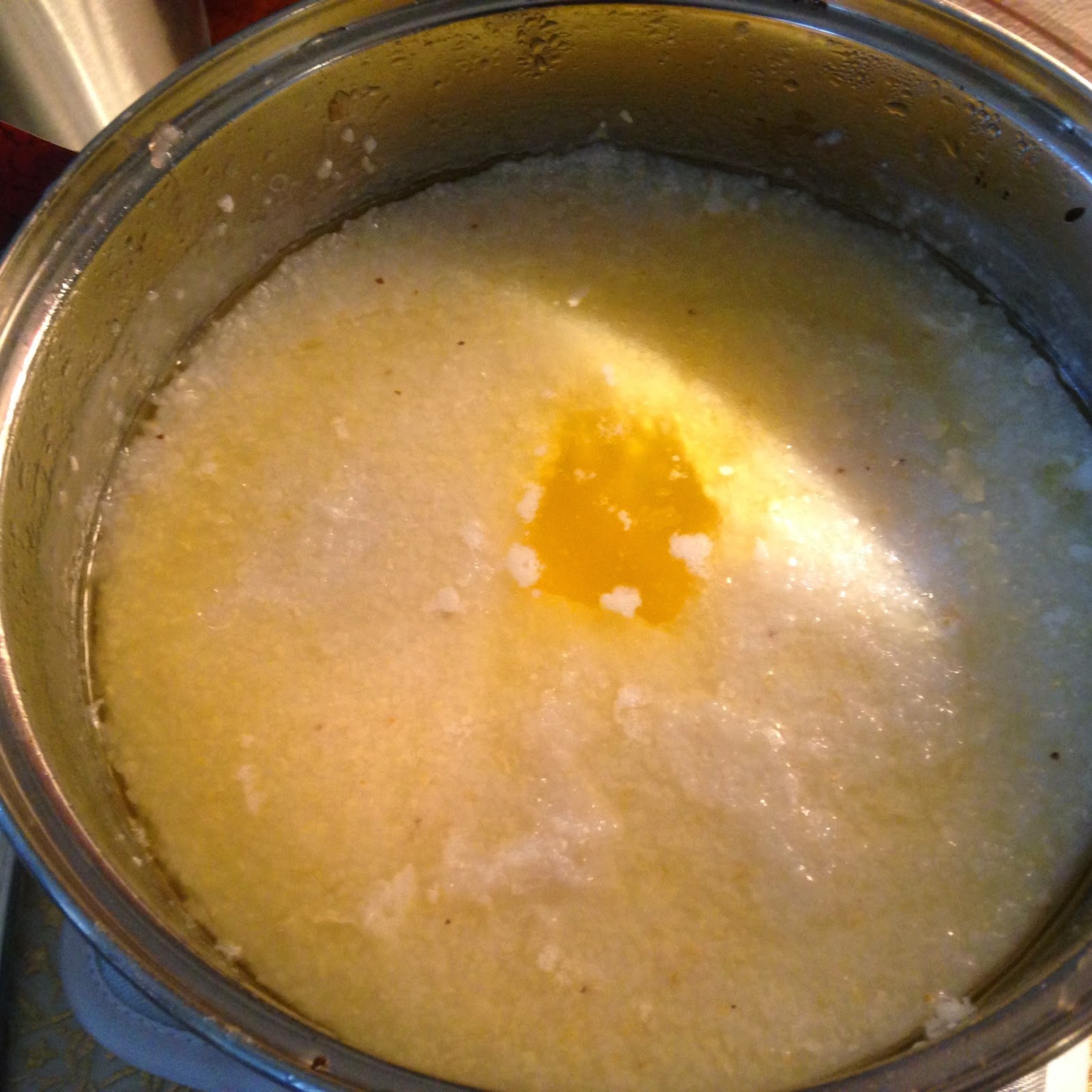 I DID manage to make the Grits, with about half a stick of butter poked down into the middle to melt.  Grits is a Southern version of a creamy, white Polenta, and some of us prefer ours with just a little sprink a sugar. 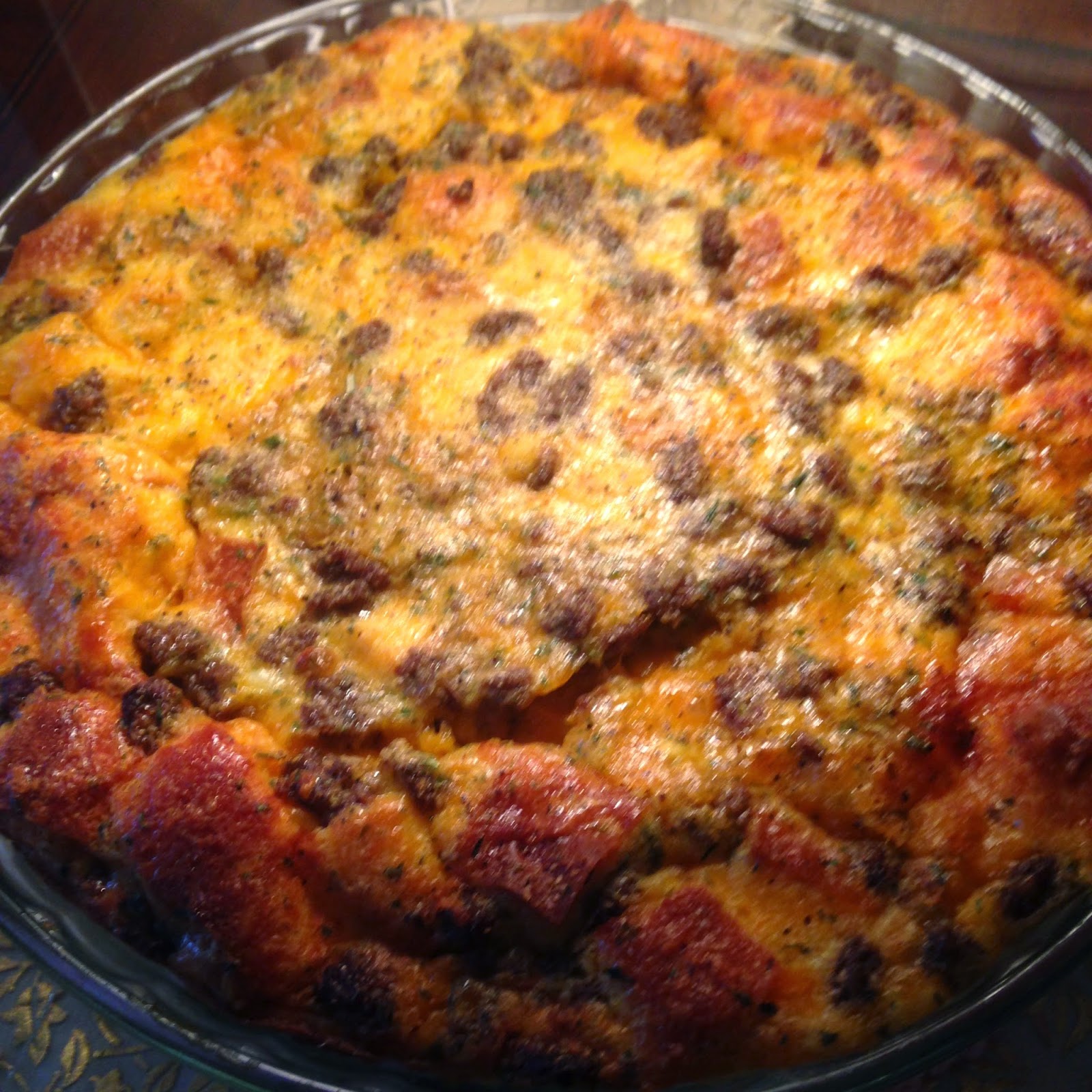 There was Sausage Strata, bubbly and golden.   It's an eggy bread pudding, with lots of little pork sausage crumbles. 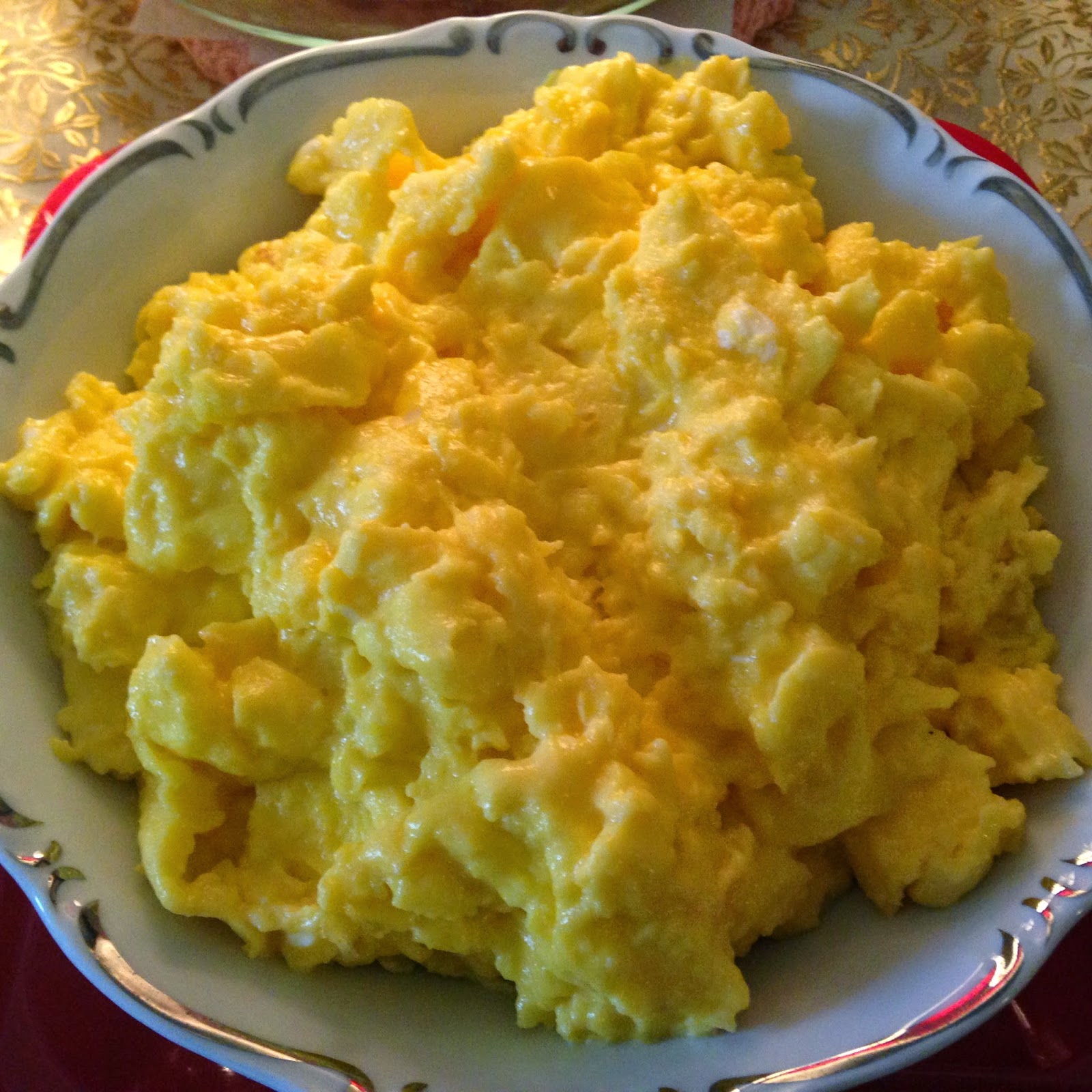 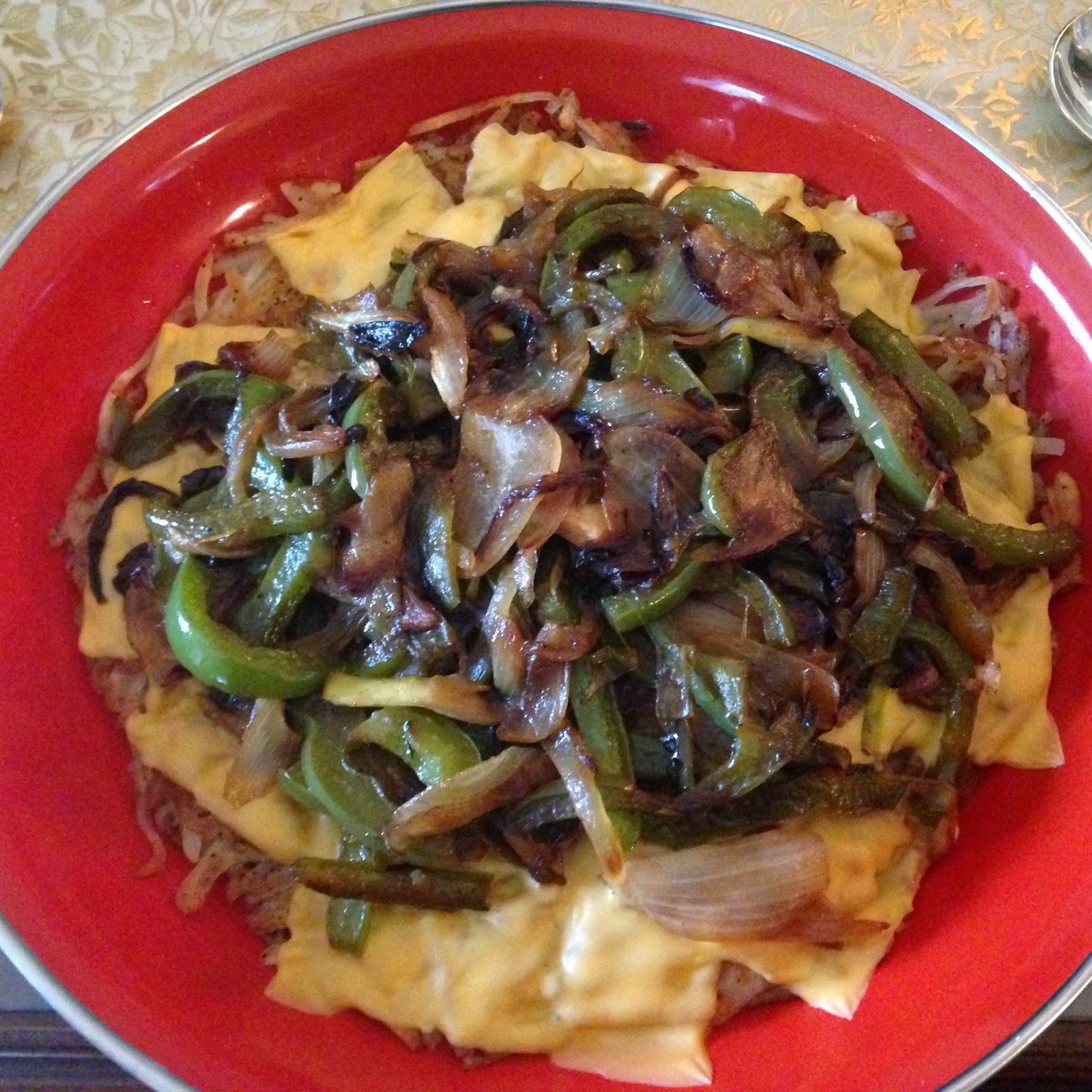 Hash-Browns with caramelized onions and peppers and white Cheddar. 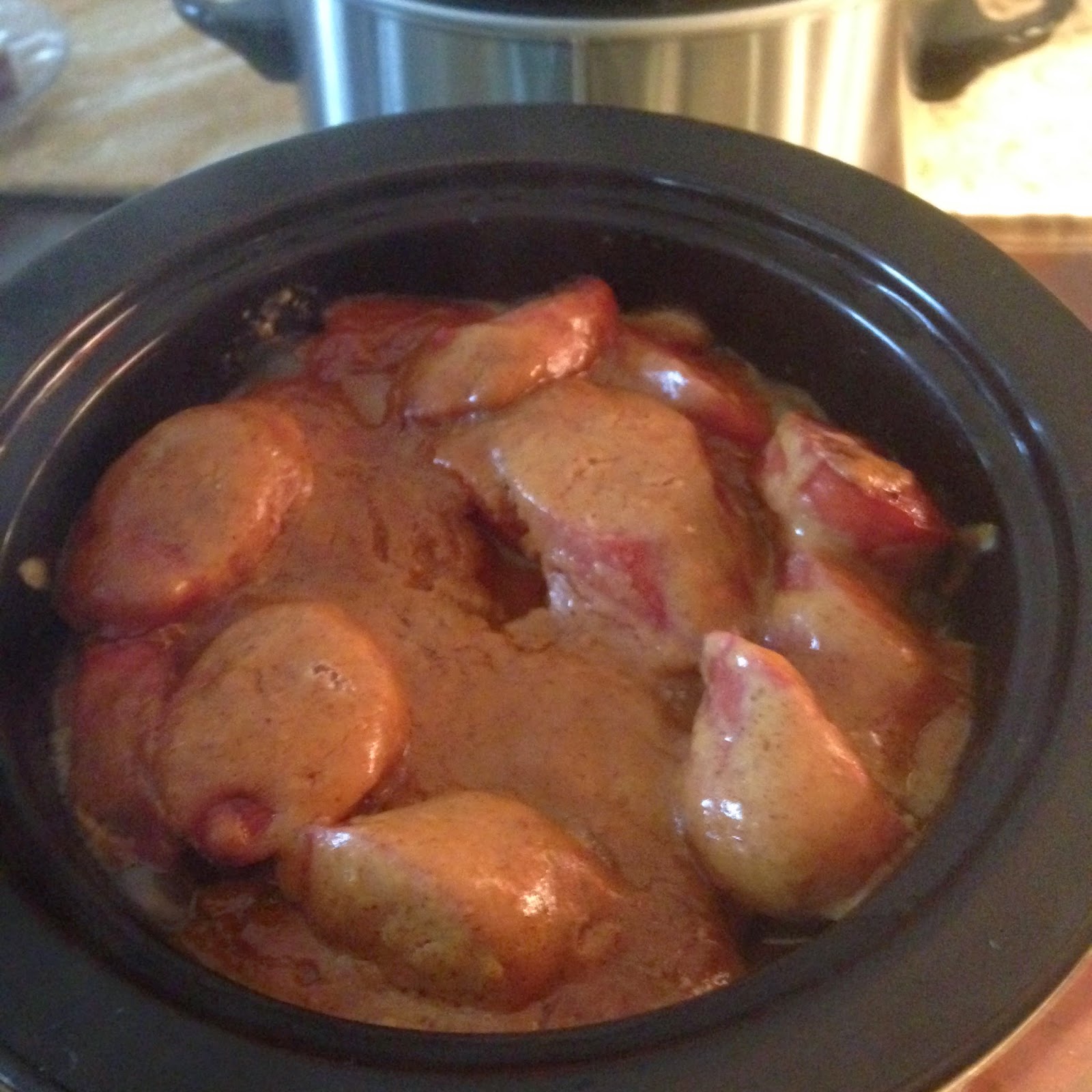 Kielbasa in a honey-mustard sauce, in a little doll-sized crock-pot. 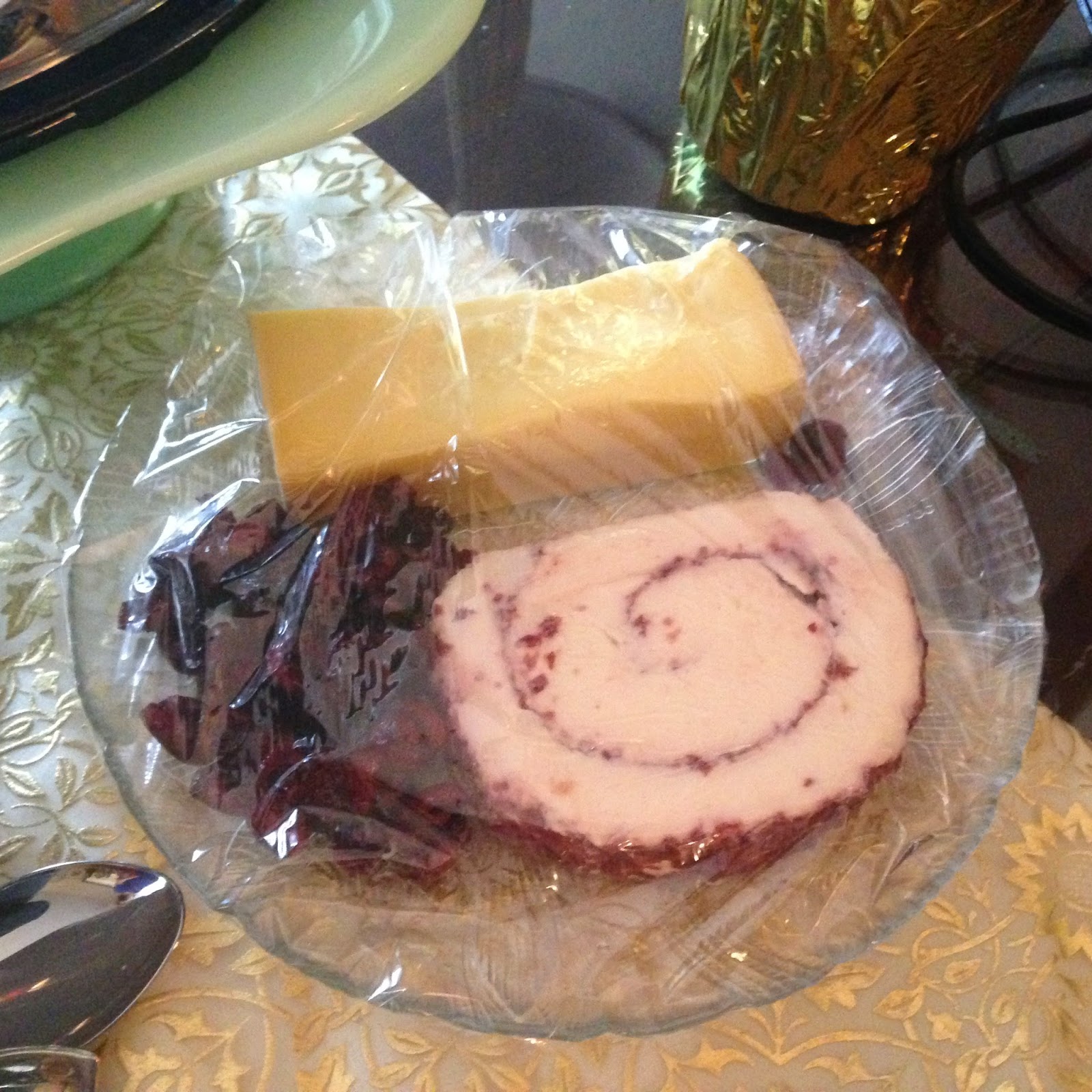 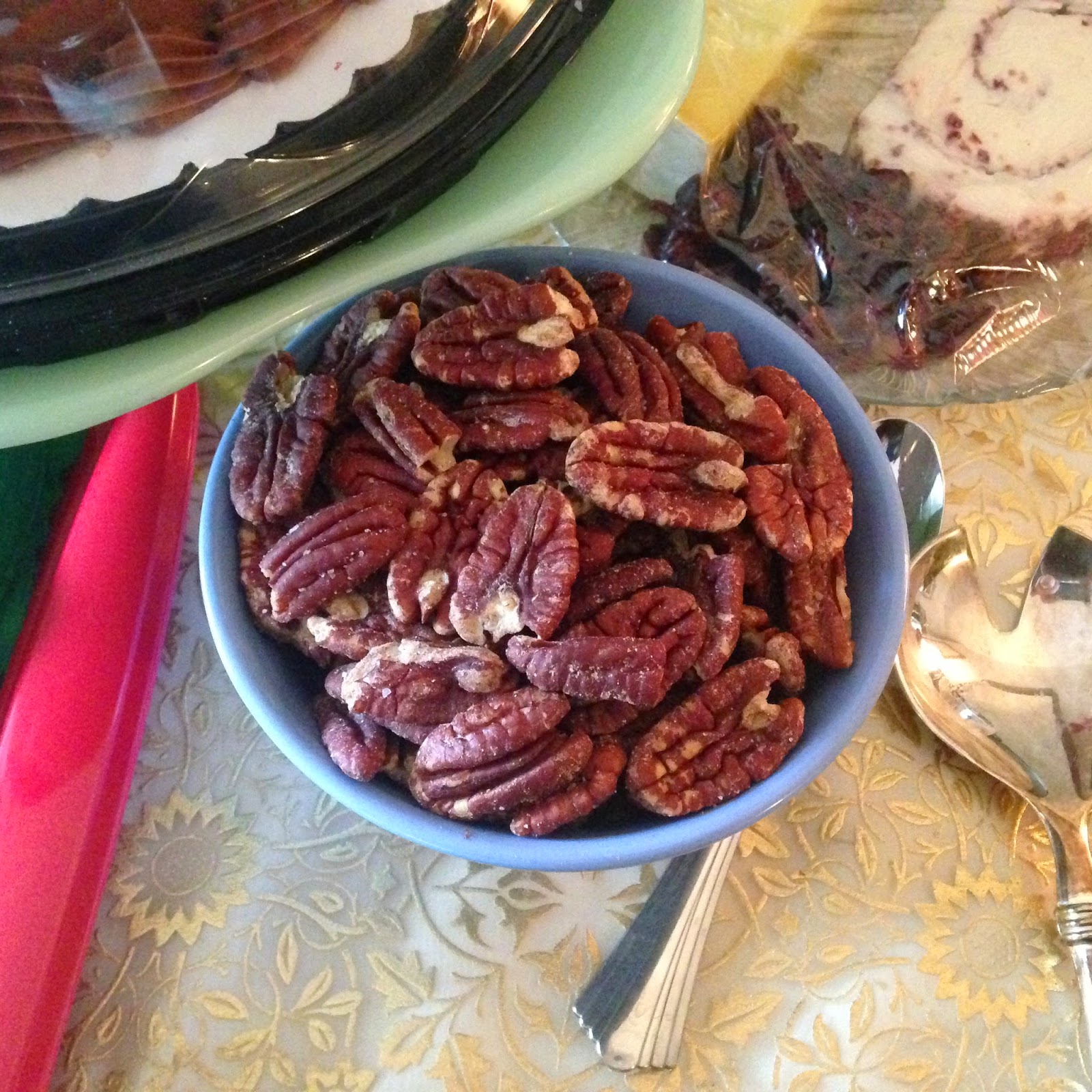 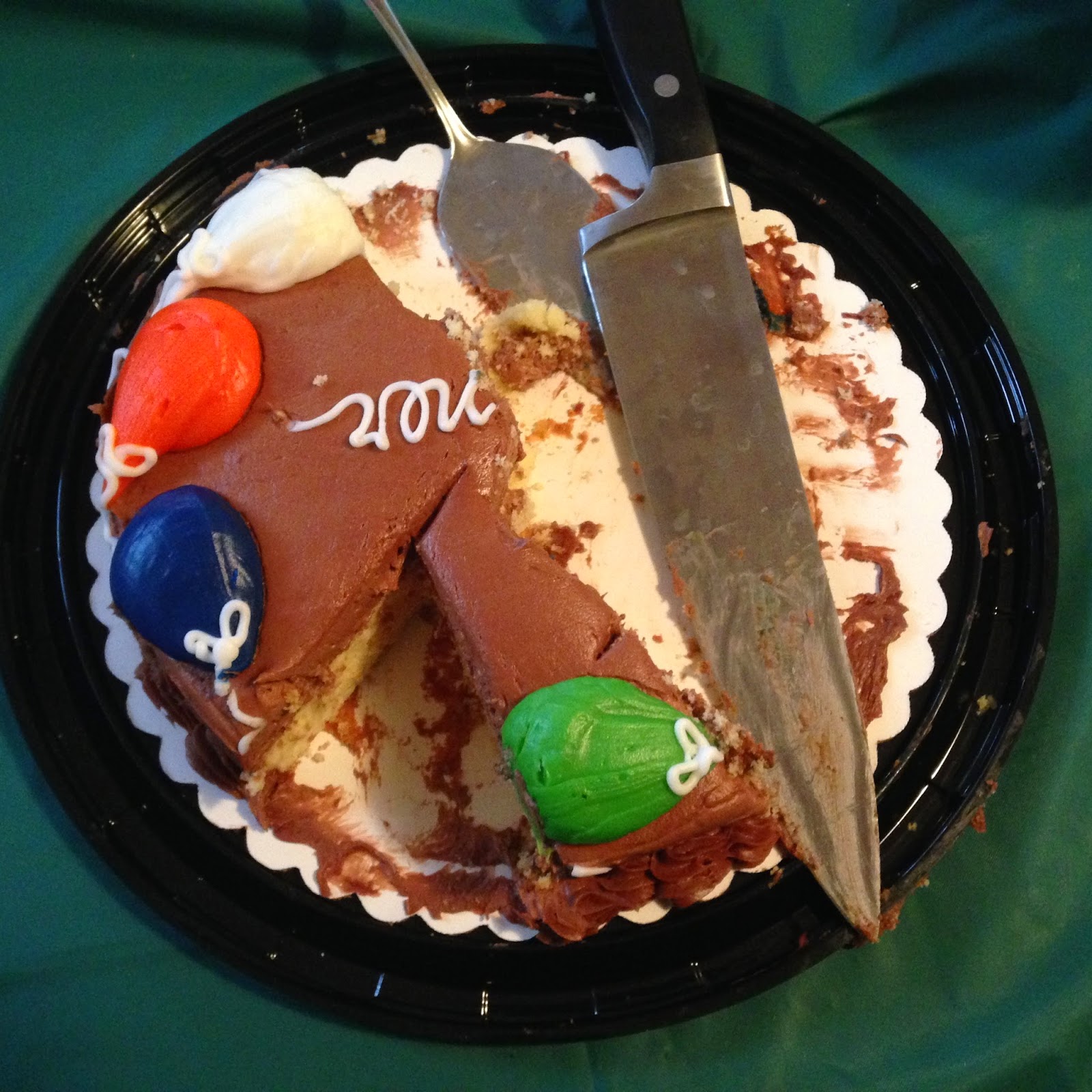 What happens to a birthday cake when everybody chooses a different color of balloon.

We had quite a day, beginning with Ganner's hiding inside the big Water Heater carton, on which he'd written all sorts of BEWARE!!    and  DANGER!!!   And CAUTION!  IT BITES!!! topped by quite a faithful copy of a portrait of him painted by Sweetpea when she was in pre-school.   As afraid as I was, more for HIM than HER in this charade, since he twice practiced his grand entrance, bursting out the door and almost collapsing himself, box and all, onto the floor, but also making sure she did not take fright either, I gave her a whispered word during our hello hug, and armed her with one of the big flexible foam tubes which came as cushioning in the heater-box.

One jump from the box, a smart set of painless whacks with her sword, a small set-to as he armed himself with another, and much merriment and hugs all round and lauding of the heroes.

After Brunch, four of the things made their way upstairs, where we tried our hands at balancing them on our palms, balancing things on THEM, doing that spin-the-plates thing with Chinet and frisbees, and lots of surprise jousts throughout the afternoon.

I swear, That Child was the oldest person in the house. 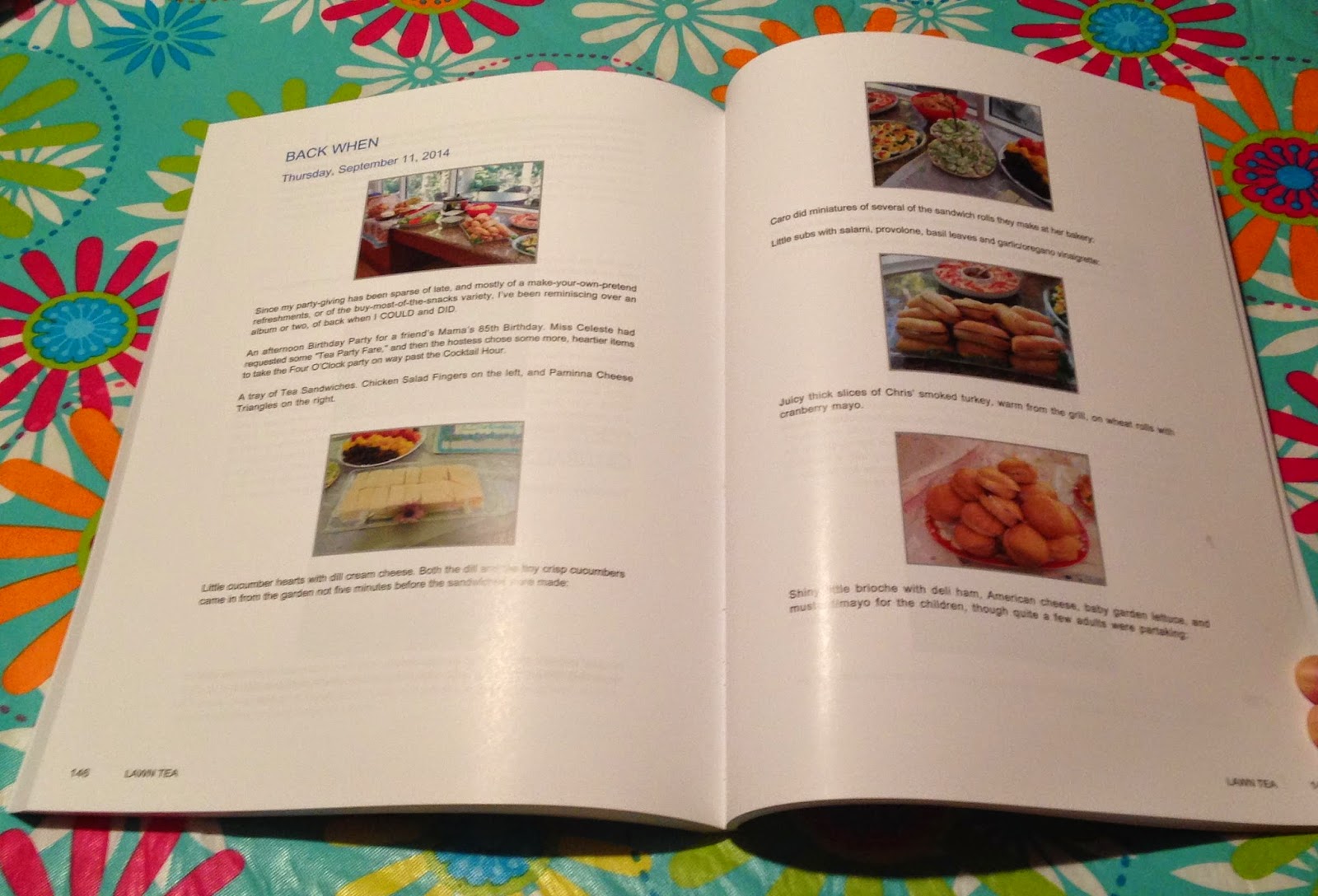 Just on a whim, I ordered another copy of my latest blog-book the other day, and since it was one of the smaller volumes over the years, I had them print the words-and-pictures in their actual spots, rather than pictures-down-one-side, words all in a line beside and above and beneath.  I’ve heretofore chosen the most inexpensive of the options, so as to get a volume just to hold in my hands.  Having the words and pictures simply thrown out there into the ether feels so inconsequential and insubstantial, some how, as if they’d disintegrate or whirl off the virtual page and disappear forever.


And now, at least I have a “hard copy” to look back on, or sit up in the sunshine and peruse on a cold afternoon, thinking on other times, other days, and remembering.  Just seeing the bright splashes of colorful times and occasions---the places we’ve been, the things we’ve enjoyed, and especially moments gathered around our family tables---lovely keepsakes that shine, when the memories start to fade.   It's like I remember walking into the canning store-room and just standing there, taking in the marvel of those hundreds of shining, colourful jars of the bounty hard-won in the hot garden and even-hotter Summer kitchen. 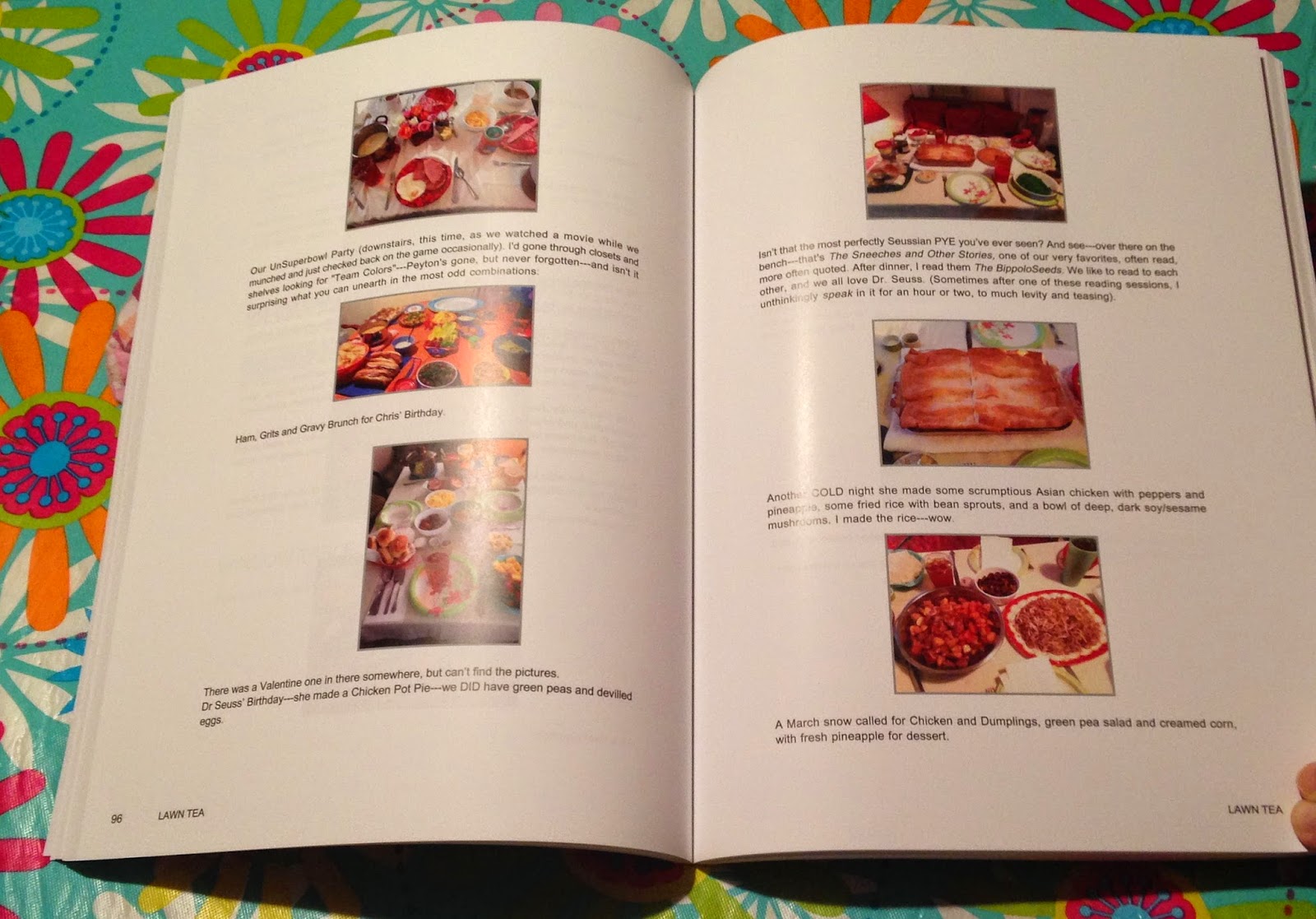 Having the titles below the pictures for once, or the little paragraph describing the pictures, is a small luxury when you’re making just one copy of anything, and didn’t increase the price too much.   It’s just nice to have them in order---kinda feels like my own little home-made magazine.

It’s just a little whimsy and not a hill of beans in the foothills and mountains of the world, but as somebody said, it’s my beans and my hill, and what does it matter?  And as someone who has dug and planted and patted down those four-beans-to-a-hill on many a long row in that HOT Delta sun---it’s a nice harvest to reminisce on. 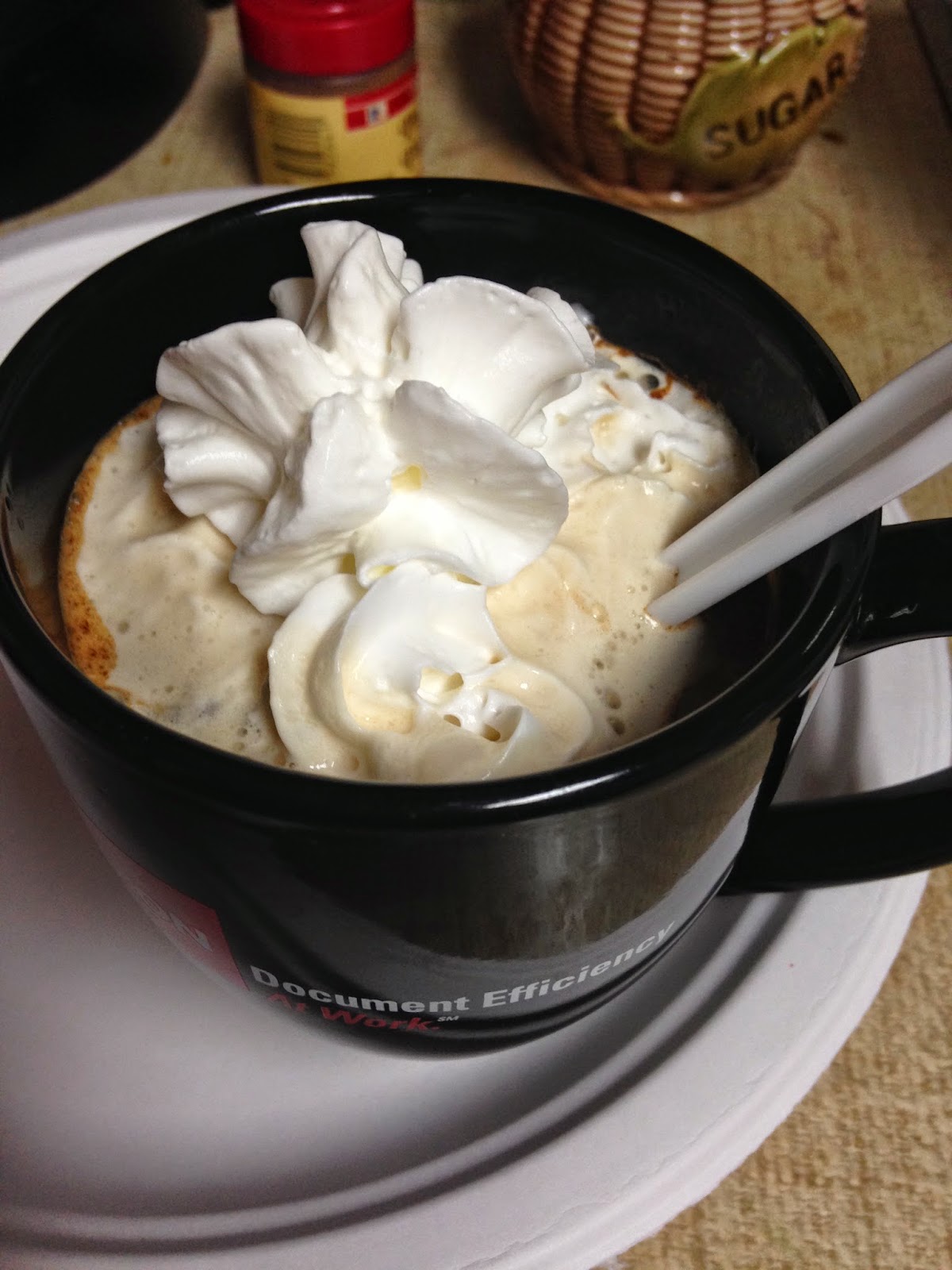 Doesn’t it seem longer than One Month Into Winter?   These raggedy-cold days---even those with such glowing sunshine that you’re called OUT into whatever daytime interests are motivating (or in my case, merely upstairs into that bright sunny guest room with all the comfy pillows and soft blankets and BOOKS for an afternoon)--- these days are gone in a blink, yet it seems ages since December. I’m moving as slowly as the time, hardly working, letting things and chores pile up around me like liabilities of largesse.   We had so much fun and festivity and food and togetherness during Christmas---indeed from Thanksgiving on, with gatherings and visitors and decorations (all of which, contrary to tradition and sense, are still UP.   The tree still shines out the front windows, the small poinsettias-in-pots are valiantly dropping their leaves upon a vast pile of mail covering their buffet, and snowmen, Santas, stockings and a tee-ninecy Bumblesnowman inhabit a big wicker rocker in the living room, presiding over all the unsent/unclaimed presents languishing on the tree skirt.   Even downstairs, great swoops and swags of ribbon-lights twinkle an eternal carnival onto our breakfasts, our evenings, our TV nights, and scatter around the room, across the pages of our Nooks, the printer, the TV screen and picture glass on the walls like strings of glowing beads in some magical hall at Versailles.    I've been a neon-fiend since childhood, and this is Heaven.

We had a wonderful time, and now my batteries (typed that "betteries," and I think there MUST be a place in us all---a magical socket seldom used, for betteries to keep us primed for the slow times, the hard times) are storing up and my mind refreshing, for the words are coming, though sparse.     I'm trying to think of something, anything, to write about---reminiscing over Cajun friends of my youth, some old cooking memories, how feeding the Harvesting Crew in my own first-married years matched the old Harvest Dinners put out by the farm women when the Threshing crews came through in the old times, making their clean sweeps of the fields.

I woke today thinking of the prizes on Queen for a Day, remembering the mink stole and a buncha Lanvin stuff and a bottle of FAME-by-Corday, along with stoves and dishwashers and sets of dishes and cookware.   And I dream of the books of my childhood, most of which set me on the road to all my love of reading. 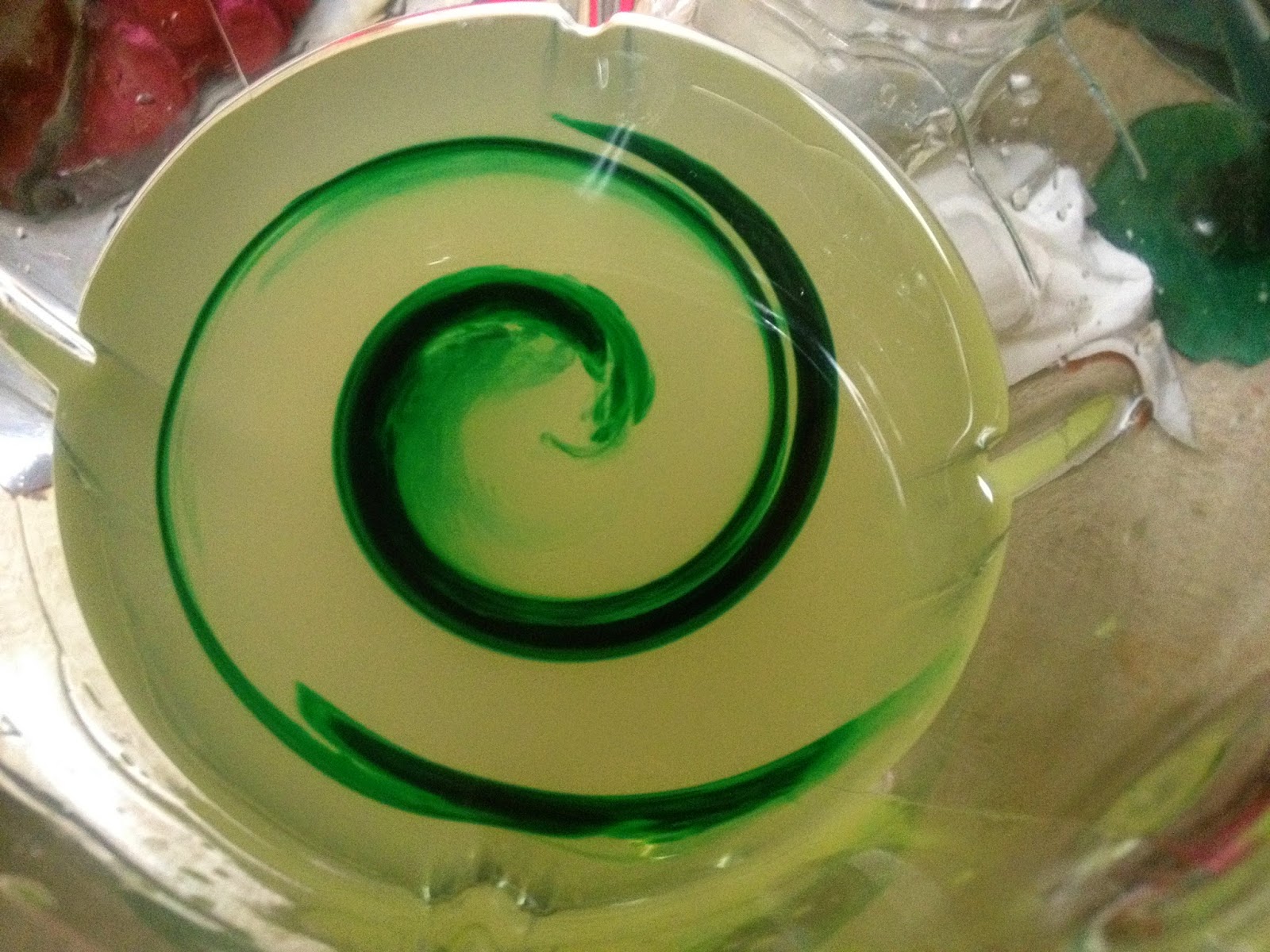 So, despite setting some of the bits and pieces into WORD for translation to something comprehensible, I'm still whirling through the past, in a flurry of Apricot Nectar Cake, Nancy Drew, and Autumn Haze Mink.   (Yes, I know those books should have been something lofty,  like Plutarch's LIVES or Landor's CONVERSATIONS, but Nancy Drew it was, and I’ll not apologize for it).   Think of how many dedicated nurses owe their career choice to those little Trixie Belden paperbacks, or the ground-breaking female newspaper columnists and TV newscasters spurred on their way by the captivating Brenda Starr, and rejoice.   I’ll go now---this has turned into an enormous tutti-fruiti/potpourri/paperback twinkle-light peach cobbler of memories. 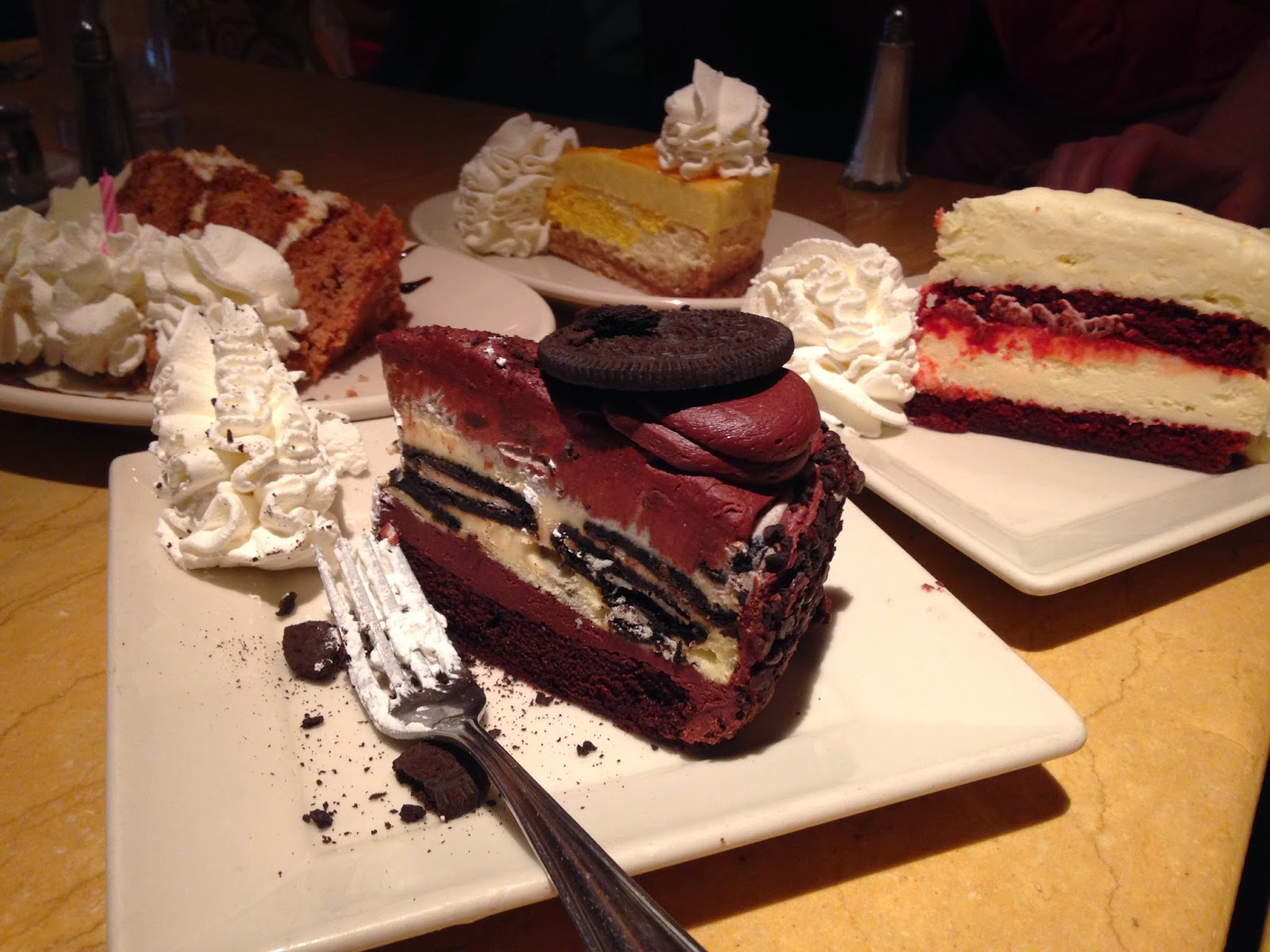 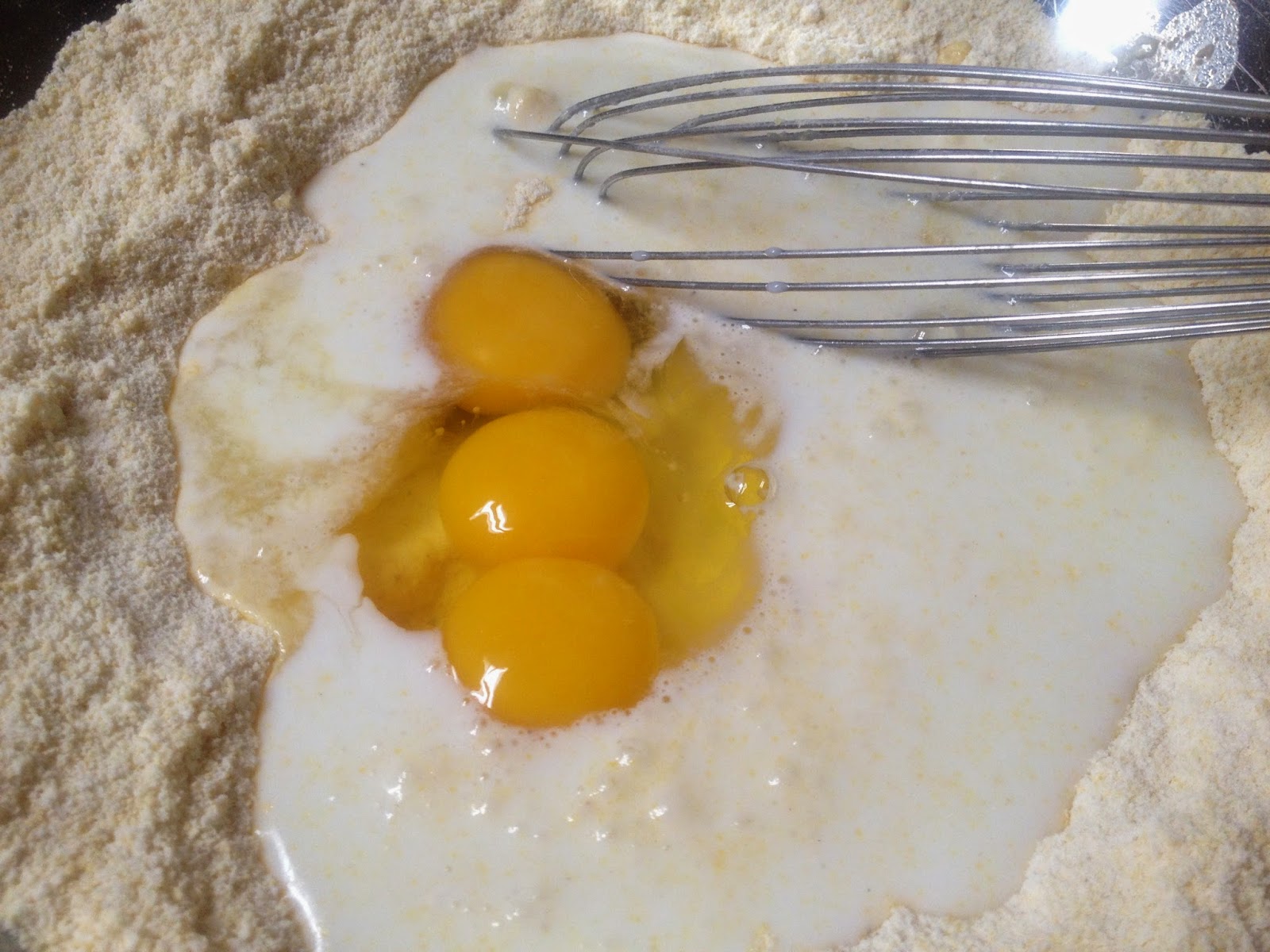 On this first official Back-From-The-Holidays for school and lots of working folks, I’m just wandering a bit in all the pictures which were snapped a year ago---the bright moments around the table, the twinkles of the tree, the hush of the snow as it encompassed us all in such soft captivity this time last year.

From the little thumbprint picture in last Winter’s album-to-choose-from, I couldn’t for the life of me decide quite WHAT this was---an odd splash of golden yellow on a sea of whites---not quite your usual photo of anything, animal, vegetable or mineral.    And it was simply the beginnings of CORNBREAD---the drys softly cuddling the puddle of buttermilk, with the eggs gently dropped in one-at-a-time.

Only this time, there were two yolks in one of those splendid Jumbo eggs---a twinning of might-be that missed the hatch to come down the line in that neatly-dozened white box to my kitchen, for the New Year’s bread to go with the Black-Eyed Peas and Collards of the new 2014.   A Lucky Egg for the new beginning---both fresh and shining and filled with promise.    The luck was beaten into that bowl of batter, poured into the butter-sizzle of a black skillet older than my children, and shared on that first day of the year.

And the year WAS bright in most places, with luck or angels riding on our shoulders on several notable occasions---Sweetpea’s escape from an upside-down van in an ice-skid last Winter (“Ganjin, we went swooo and swirrrrrl and upside down and then I was looking down at MONEY ON THE CEILING!”)

And the absolute terror of June, when Chris’ health scare put us all into a dreadful hold til he could heal and have such a wonderful report in November---Thanksgiving, indeed.  He’s bright and joyful as ever, having just trimmed his beard from going about resembling Santa for a couple of months, even to the unabashed wearing of that red-and-white hat, even on service calls, for the month of December.   There’s just something about a man who so knows who he IS that he can wear and do a lot of things which mere mortals would decline---and I think the sight of a fella who’s comfortable with his knees scrunched beneath a tiny tea table, sipping p’tend tea from wee pink cups, is even more romantic and appealing than any table for two with roses and champagne. 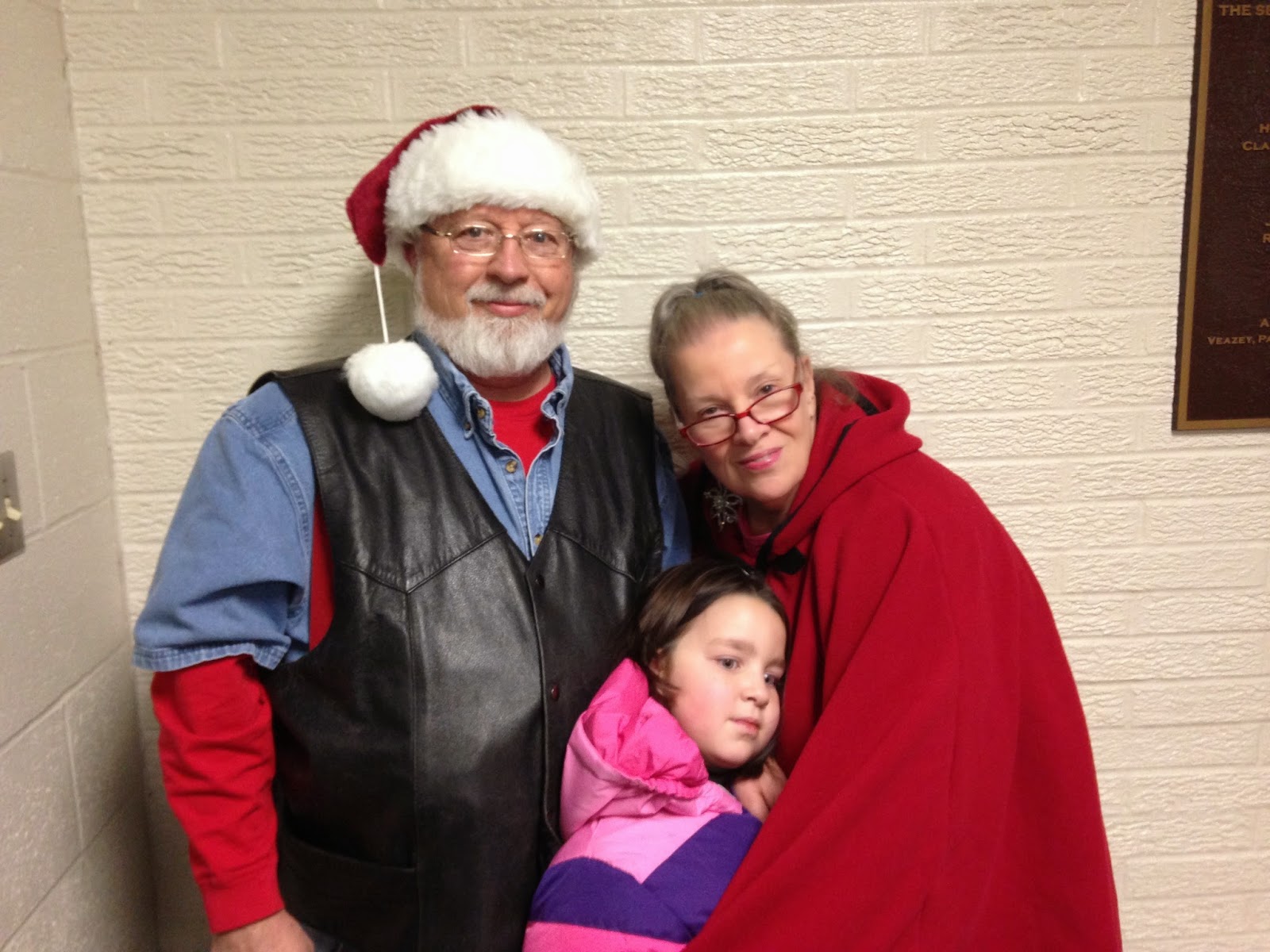 And so, for this bright New Year, I wish you all great slices of Luck Bread, filled with all the flavours which make you happy.   And may all the bread you cast upon the waters come back CAKE.
Posted by racheld at Monday, January 05, 2015 10 comments: