Please see Parts I and II below, for the beginnings of this story. 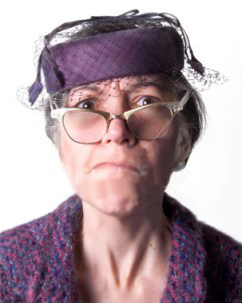 What the ceremony SHOULD HAVE BEEN.

When they DID get Aint Pell out of the car and into the Peabody, she bludged right onto that red carpet, just like it had been laid out special for her square-set, fat-heeled little pumps, and stomped off toward the elevator, marching right up to the uniformed young man and standing imperiously in the door for him to let her on.  Never mind the crowds gathered around, never mind all the people sitting on the floor along the sides of that carpet like hedges on a path, and with her STEW button set so loud that she didn’t even hear the announcer’s voice OR the rousing Sousa march.   No matter that nobody back behind her could SEE the show they’d come to see---she marched right down that red carpet between all the waiting crowd.


Unca Dorse, trying to follow her juggernaut through the room, finally took one careful lunge of his long legs and stepped over two little girls in pink fairy-wings sitting sweetly by the carpet, and stood scanning the crowd for Aint Pell, who hadn't budged out of the way of the elevator door.


“She jes wadden lissenin’.  She gets a thing in her head and she don’t hear nobody fer nuthin’.   Folks were just a’callin’ at her, and tellin’ her to move, and she just stood there like a stump. An’ ‘nen she just stepped right in there amongst those ducks like wadin’ inta the chicken-yard with a bucket a layin’ mash.

And they lived more happily ever after---those siblings and in-laws and nieces and nephews who'd been criticized and bullied and shamed at holidays all their lives.   At any family gathering, there’d be a roomful of talk, and it would start from somewhere in the next room or outside an open window---a gentle little “Quaaaanckk, Quaaaanck, Quanck,” soon joined by several others in a kind of duckish, jabbery harmony, growing in sound and number for just a few moments like a nasal, growly choir in the distance gaining ground and fading away.  And then all was quiet, except for the stifled snickers in the room and the muffled hee-haws from the culprits, who were nowhere to be seen as they stashed duck-calls in pockets and purses til next time.

And if they ever find out which one it was that snuck out there during dinner that next Thanksgiving and velcroed a little rubber ducky on the dashboard of her big ole gold-colored Sedan de Ville, well, that one won’t ever have to help with cleanup and dishes after the Family Reunion, ever again.

That was some story. LOL
Enjoyed it very much.

I'm so glad you did, Miss Patsy. I really enjoy my friends' comments, and appreciate your reading my little bits and bobs.

Hope you and Mr. The Bennie are staying cool, and enjoying home-grown tomatoes EVERY day! We've got one left for supper, and I'm making Miz Paula's Cracker Salad with it, and Caro's doing fried chicken, squash and butterbeans.
Wish y'all could join us!

We have just finished reading about Aint Pell and the Peabody ducks and are completely mesmerised by all that we have read.

How beautifully and amusingly you have recreated these scenes for us and what characters you have assembled. It is totally incredible to us that these are your relatives. Yes, we presume that you do actually know these people!!

And, we can well imagine how the duck references continue to delight your family members. We too should not be averse to including a little rubber duck here and there whenever the mood takes or needs lightening.

We all have our Aint Pells in our families. The ones who never seem to find joy in anything but for whom Life does bite back on occasion and helps us all to get our own back as a result.

Peabody ducks.....who would ever have thought of it! We wonder if we should suggest something similar......perhaps Roosters for the Ritz!!

Hoping you and your family are well. We have missed you.

It's so lovely to have you back!
And thank you, as always, for dropping in and commenting so understandingly.

Indeed, we all know some of those joyless people in our lives or those of others---the aunts and the caustic sisters-in-law and the neighbor's sharp-tongued mother who comes to visit twice a year, leaving them limp and exultantly relieved when she departs.

Aint Pell is a composite, for I don't think all her faults packed into one person would be tolerable for long. I make up whole parts and events and occasions---the grumpy-melon-ball moment actually happened---a friend and I had been to a meeting there, and were staying at the hotel.

We were just so happy to be in such a lovely setting, such an unusual occasion for us, that sparkling moment surrounded by the crisp white linens and waiter-coats, the sumptuous prospects of all that artistically-arranged food, just so happy to be a part of it. We'd looked forward to the several days as a lovely adventure and luxurious weekend, and then that frowny-faced woman, just caught in passing, has remained a memory and a mystery to me.

We stood to approach the buffet as she stomped up to the table beside us with that paltry bit of melon, as she showed her displeasure with we-knew-not-what by wielding the honeydew as some sort of guilt-bludgeon. I heard placating noises and grumbles in return; "I wish you'd got more than THAT," was followed by even more fuming noises. It was a matter of less than a minute, and it's remained in my memory in the vivid green of the melon. Just those few bits of fruit, like pouts on a plate, have stood out in those memories as would an unpleasant photograph among all the smiles-into-the-sun of a fabulous vacation.

The duck thing I made up---I could see it happening. And Roosters at the Ritz!! What a perfect project for you two---and it ANYONE can make it happen . . .

Hello again Rachel, I had to read more about Aint Pell. HA! This story is so adorable and it sure puts my imagination in drive. The ducks in the beautiful hotel photo is a hoot. The story is so entertaining. Thank you for always making your posts the best read. I hope I can resume my visits more often from now on. I have missed you so much.

Perfect retribution! Anyone who could turn up their nose at the Peabody Brunch has a screw loose. One of your better chapters, my dear!