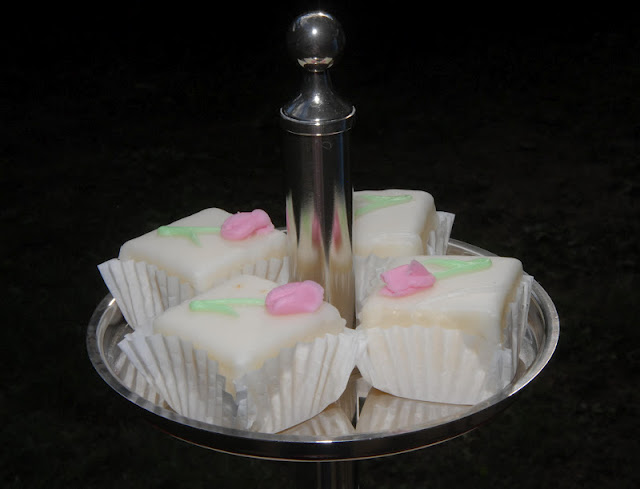 The immense storm which swept through on Friday absolutely soaked great parts of the battered old downstairs carpet and gave us a fun three hours or so of standing on our heads shop-vacuuming up the rivers and rivulets pouring through one old wall and dashing across the floor.   There are two little hummy vacs, little Teletubby NooNoos, just alike, and I manned the frenzy of vacuuming up the water as it flowed across the floor like nobody's business.  It didn't just soak in---it had a shine on top, with the surface tension meniscus heaped like the quiver on a spoon. Each tank filled in no time, and Chris was doing a hustle of his own, popping off tops, interchanging the hose to the next tank, emptying the contents, and hardly keeping up with the amount going in.
It was hot, sweaty work, backbreaking until he scooted a big chair behind my knees, and that helped for a long while.   And I must have looked a sight, in ratty old T and shorts, rubber clogs squishing inside and out, and I-can't-remember-when sweat running down my face.  I thought SURELY at my age, I must have graduated to GLOW by now.
Later, I caught on to sitting in the little desk swivel, pedaling backward like Grandpa Lapp in WITNESS, as the trail of "dry" incised the wet, then scooching forward to do another row.   Wow.    What a MESS!
About midnight (and forty gallons later), I consulted Caro:  We had company coming Tuesday for a few days, thus needed all the produce, and had lots of goodies for company---anything else would keep.   We hadn't even baked a cake yet, and if the outside was as soggy as inside, how would we ever set out those tables and chairs across the lawn AND, if it rained again, where would we GO inside?    So we called everyone yesterday a.m., postponing our little gathering for now.
And here I sit, with the blast of one big industrial fan and two regular, aimed at strategic spots on the floor, a gallon jug and spray bottle of disinfectant/good-smelling stuff at hand, and a brand new 16-gallon shop vac standing attention with the two small guys.
And WAY later, after it was "all over but the shoutin'," Chris turned to me and asked, "When I went upstairs for the other vacuum, did I REALLY run past Caro without my pants on?"
But we DID pick up the cakes.   THE CAKES.   With STRING even!!   How nostalgic is that? 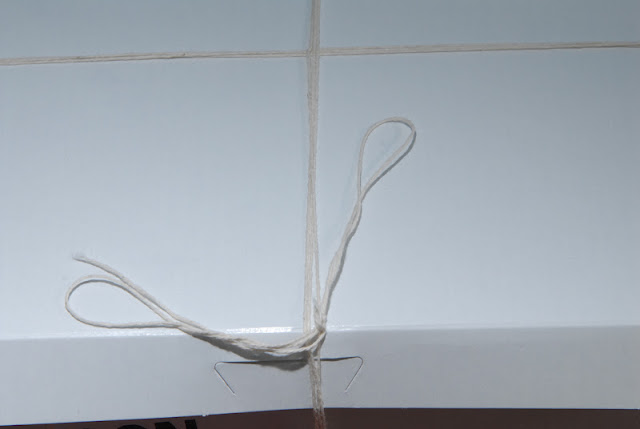 Great anticipation, with a deep inhale of the vanilla perfume, then the treasure revealed: 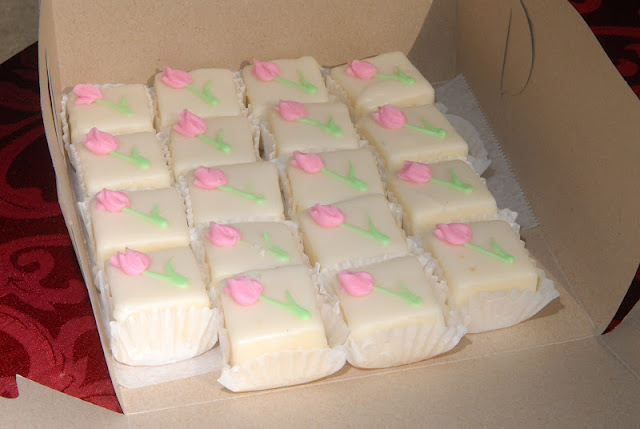 Perfection and delight and all those good things---I was in too much hurry to get out the doilies: 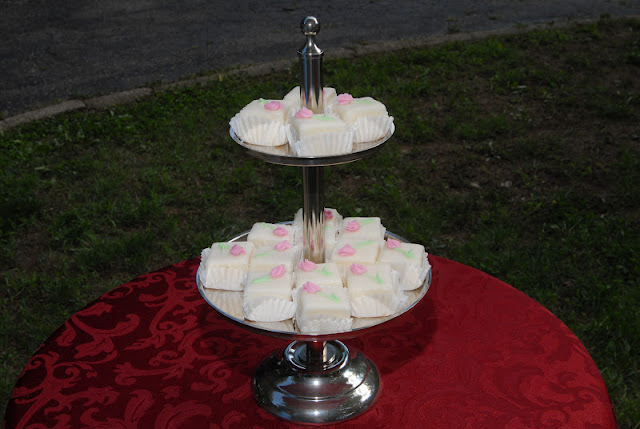 We may have been "done out" of our party for now, but as my Dear Mammaw used to say, "By Jingoes, there's CAKE!" 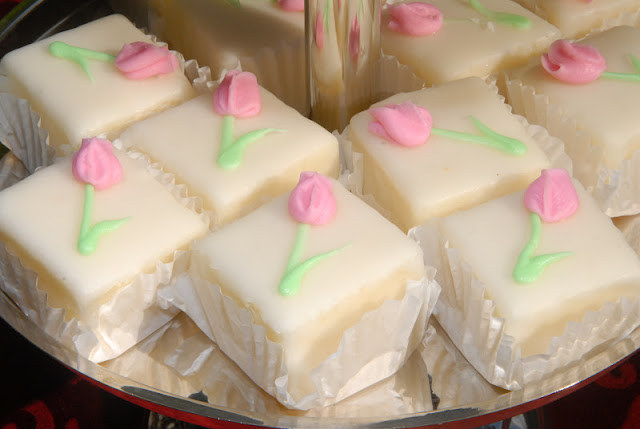 Hello Rachel:
Well, you are certainly sounding very philosophical about all the wet and damage, not to mention the work after the storm. We are quite certain that we should not have been anywhere near so calm and collected....until the cakes arrived!!!!

What delicious looking squares of loveliness they look. Doilies were definitely not needed, for what could look prettier than those dear rosebudded little cakes?

So sorry about the flooding,I know just how you felt same thing happen to us one time.
I could smell the sweet little cakes.

So nice of you to drop by and comment on My lavender post.Your cakes are so yummy and pretty looking.

Rachel......what is a little flooding lol lol (smiles) "when there is cake!" they look wonderful.

Oh, I am sorry about your flooding!I have been there several times, so know what a mess you had.I am sure that beautiful looking cake would have made me feel better too!

Bless your heart, Rachel ... and I mean that sincerely. I'm so sorry your tea party was rained (or flooded?) out, but Fall's just around the corner so there will soon be plenty of pretty days just perfect for a party.

I'm so glad you were able to enjoy the petit fours. They were lovely, and probably tasted even sweeter after all that mopping and vacuuming and "glowing."

Well, damn. It is okay to say damn, isn't it? I mean really, damn would seem warranted by this event.

I was so looking forward to your party. I would have been saying damn with my mouth full of those lovely cake morsels. Petit fours can cure almost anything.

Love those cakes. Not so fond of flooding. Love your writing tho!

Bless your heart. I'm sure I would NOT have handle a flood like you did. Way to go! And cake always makes things better. smile

I'm back to blogging! I might not post or visit as often as I used to, but I promise I'm back. Loved catching up with you.

Life is so good for me right now. I'm loving life and going "full steam ahead", so time on the computer is limited.

Oh dear Rachel, How awful for you. There is something so awful about wet and the worry of mildew. I once started a wash in the laundry room by my kitchen. Left to go to lunch with friends and came home to water flowing out of my front door and garage. The washer hose burst and there was a flood on the main floor of our home.I called for help and as they arrived I was sweeping water out my front door. To top it off I slipped and fell and heard the workman say, " You gotta have stitches mam." Five above my eyebrow as a matter of fact. Yep, it was a bad day. We moved upstairs for two weeks while big noisy machines never stopped humming. It required new carpet on the first floor. Yikes.

I feel your frustration and pain. The one bright moment was the unwrapping of the beautiful cakes. Smile. I would have consoled my self by eating a LOT of them. HA! No pants??? who noticed? Laughing here.

Yikes what a disaster. Been there done that..don't want a repeat.

Oh, my dear! I couldn't be more disappointed if I'd been supposed to attend! I got a text from Chesapeake about having little cakes for dessert, but assumed that they were leftovers! I'm so, so sorry! For the mess and the dream of...once again postponed! But I know your lovely daughter is determined that you SHALL have your tea and I'm sure that she's already at work planning!