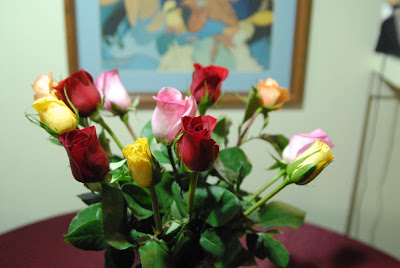 The first time I answered the door on Sunday, a lovely young couple presented me with roses. They came in smiling out of the not-cold-enough fifties morning, and soon after, the rest of the guests were coming in both doors.

Chris was just “in his glory” as my Mammaw used to say---greeting and introducing and grinning at all his friends, and everyone gathered upstairs for a while, whilst I came on back down to get the quiche and the potato casserole out of the oven and put in the two big black skillets of biscuits. They wandered the upstairs rooms, stopping at the bar in the kitchen for juice or wine or a quite brisk Bloody Mary, with Worchestershire, Tabasco, celery salt, and a little sprinkle of a new McCormick thing---Worchestershire sprinkle-stuff---on top, with a crispy little flaunt of celery for stirring.

The big old glass-top dresser in the living room had a little array of nibbles: Artichoke heart gratin, with crackers and Scoops; Jalapeno rollups, and crudite and homemade Ranch dip with scallions.

And it was HOT downstairs---I opened the kitchen window and turned on the tiny foot-fan which lives in my kitchen in all seasons---sometimes when I’m in a hurry to put a second load in the DW, I’ll let them heat-dry til they’re really hot, then open the door, slide out both racks, and turn the fan on them for a couple of minutes. They seem to dry in seconds.

And everyone seemed to drift down sooner than expected; they came to get a look at that gorgeous ham, to be given a guided tour of the cockpit of Chris’ new grill, and to seek out the iced tea/water table. I’d told them to just pick a place they wanted to sit, grab that glass, and help themselves, so the tables look a little bare in places.

And the white things are not chargers, though the little hang-tags said so, when I picked up two dozen from the “new” counter at Goodwill several years ago---ten cents each. They’re flannel pads, like you’d put between your good china for storage. And I put them on the glass table because I like to give everyone a warm plate, fresh off the stovetop, and these pads keep the glass safe, plus they keep the tabletop itself from sucking all the heat out of the plate and food before you can finish your dinner. 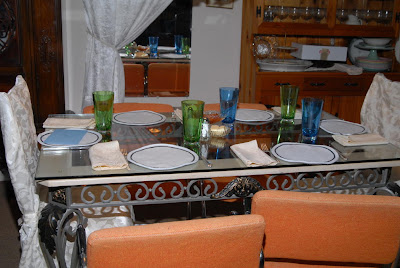 Our Breakfast Table, with little dishes of pear preserves and butter: 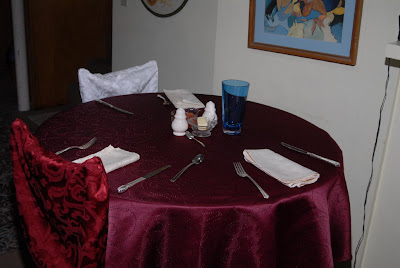 The nice folding table we got not long ago at Sam’s---it’s WAY sturdy, and seats six. The chairless spot at the back is awaiting the Princess Chair---the tiny white highchair which has served for all four of the youngest Grands. 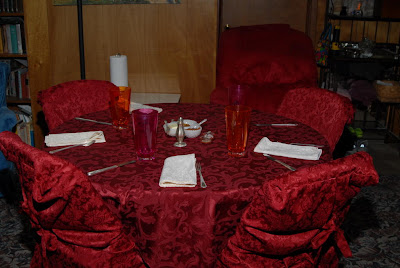 And though we had a coffee-and-teapot area in the kitchen, we can’t have a meal without good ole Iced Tea: 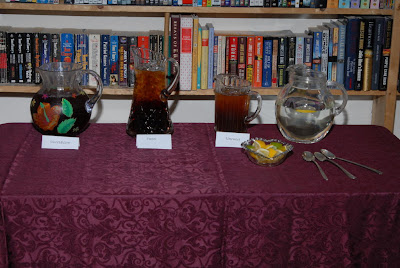 The star of the show---it practically got a round of applause before he started to carve---and everybody kept drifting by for a taste. 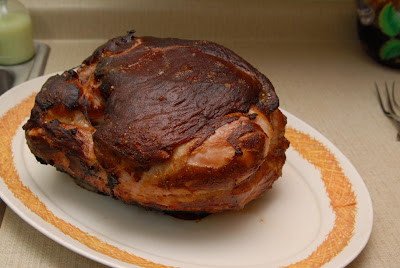 Caro and I call those tiny samples of ham a “flick.” So we all passed by Chris, carrying bowls and platters and trays, accepting a little flick of ham as we got the food served. We left the big red Le Creuset of soft pearly Calrose on the back of the stove, as well as a big flowered pot of Shrimp Etouffee for ladling over. I cooked the sauce on Saturday, with its chunks of green pepper and onion and celery all cooked down with the herbs and spices and tomatoes, and chilled it overnight. It went back on the stove about thirty minutes before serving, to come to a good simmer, then three pounds of the limp gray-green little forms went in, to bloom into luscious rosy flowers beneath the lid. The two skillets of biscuits, shiny with their anointment of melted butter, sat on two front eyes, and all the rest of the food was ranged round the counter.

Which is where good descriptive powers would come in handy, because after fourteen people joined us in the kitchen, with Caro and DS and DDIL and me getting the food out, and Chris carving---we got absolutely NO pictures of the food. Ain’t that just the WAY?

But I have it on several good authorities that it was GOOOD---we had Broccoli Quiche and Cracker Barrel Hashbrown Casserole and a cakestand of Caro’s lovely pastries, with a big trifle bowl of pineapple and cantaloupe and blueberries, and a huge tray ringed round and round with the long, super-sweet strawberries which seem to surface every year as a January bonus. And homemade Pear Preserves and Peach Preserves on each table, as well as a lovely vanilla-scented Birthday Cake for dessert, with Blue Bunny Vanilla and little dishes of toasted pecans.

A lovely time was had by ALLLL, I vow, and only the Colts Game drew the folks toward home by three o’clock.
Mammaw always said you knew the food was really good when nobody reached for the salt---the unmarked surface of these is a nice compliment, I think: 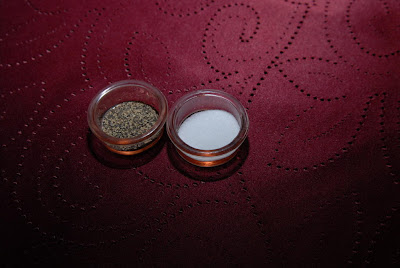 And the aftermath---Fourteen people and a nineteen-pound ham, with folks carrying home tomorrow’s lunch in baggies and bowls. This, besides all the goodies in the fridge, was what remained: 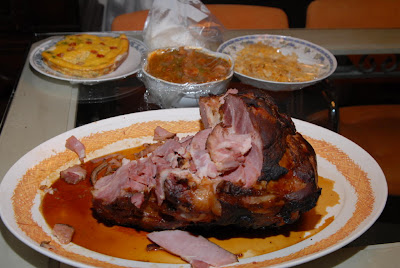 And this morning, we sat down to our breakfast, with my coffee and his pot of tea, served in his favorite moustache cup. We didn’t even notice all the work left to be done, or the six chair covers wadded in a chair, or the four folded chairs to be taken to storage, or his favorite vest still hanging there, like a comfortable guest. 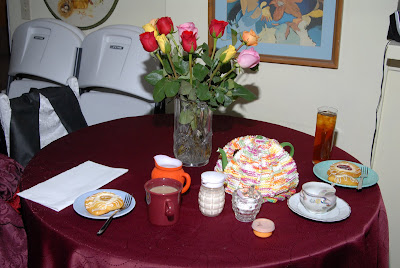 Rachel, this was such a nice way to start my day. I loved reading about your party and seeing your tables standing ready for your guests. I'm sure a good time was had by all.

Chris's ham must have tasted as good as it looks in the picture, judging by what was left. Doesn't it make you feel good to know everyone enjoyed the food you spent so much time and energy preparing for them.

I hope the rest of the week is a good one for you.

By the way, was it your little one's third birthday?

Thank you, Janie---everything seemed to be good, and there was a lot of laughing going on, so I think it was all OK.

No, it was Chris' ump-teenth!! We've had this "annual" brunch for about twenty years for his day.

(But she DID climb up on his lap at the table, sing along with the Happy Birthday, help him blow the candle, and quietly sat and ate cake and ice cream from his plate for a long time).

What a lovely party! Tell Chris Happy Birthday from us (so his birthday is the 24th?). Everything sounds delicious and fun and hospitable - just as I would expect!

You did a beautiful job setting your tables...It look so pretty....I always love entertain at home....I'm sure everyone had a wonderful time...you can sure tell you did everything with love...
Hugs,
Mo ;-)

Oh, this must have been such a fun, fun time. Everything looks so pretty, and I know it was! And, I'm sure the food was delicious. Just the description made my mouth water! That ham! Yum!
I hope you have rested up since its over. It really takes a lot of planning and preparation to get something like that ready. I know your guests are so thankful you did!

Hello Rachel, finally I am getting to answer your comment. My life is a bit busy these days and getting back to you really took way to long. I am sorry my friend. I am sending you an email as soon as I close this comment. I have a closeup of the needlework and frames.

Your brunch is so perfectly lovely. So is your text. You know how I admire your words. The food sounds delightful and the tables look wonderful. I love those flannel thingies. It is a great idea. I do love those Good Will discoveries. I had to laugh about the forgotten photos of the food. I so have been guilty of the same thing. Somehow serving the food gets down right hectic!!

I scrolled down and also admired your canned tomatoes. My sister and I did a LOT of those this summer. Gladly, my pantry is still storing quite a few of them.

Have a wonderful day.
Hugs, Jeanne