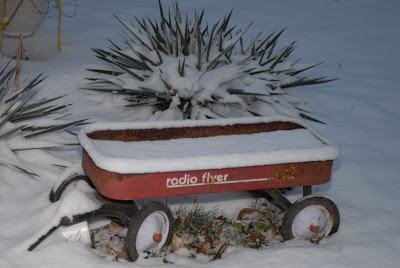 We went out and about today, in the slow, drifting-down flakes the size of cornflakes; their warm reception from the ground sent them melting the moment they hit. Dear Son #2 and I strolled the dampening aisles of the grocery store, in company with fellow-gatherers intent on those gallons of milk and loaves of bread.

And you know, that's our Southern upbringing---ten flakes past a window, and the school buses started carting the cheering younguns home, as their parents sought the earliest moment they could desert their own posts at work, to get to the grocery store. Milk, I always understood, but how all those clumpy soft loaves of Wonder Bread would save the day in an emergency situation was a mystery past my solving. During all my years of living below the M/D, only once did the power in our area go out for any length of time, and that was during an ice storm, in which the relentless freezing rain coated every tree and bush and shrub with unbearable weights of diamond-clear ice.

The valiant plants shouldered the burdens as long as they could, then with resounding cracks akin to the calving-shouts of the ice itself in colder climes, the limbs gave way and surrendered, tumbled, fell. The landscape took on the look of a vast planet on which giants had lumbered through, shearing off the tops of things and smashing the bits to ground, shattering away the sheathings crystal clear, and leaving the dark bones like some wasteland where old beasts go to die. Tarzan's legendary Elephant Graveyard must have looked something like our devastated pecan grove.

And as the layers grew on the harp-strings of power wires, they sagged ever lower in their ponderous glaze, in symmetry of drop-string on cakes I'll never bake, pulling the supporting poles with them into tinkertoy bows and bends. And the lights went out for miles.

Except mine. I'll never explain that, for the power people worked for DAYS, re-attaching and re-positioning and raising the poles, and surely SOMEwhere between us and the power station, there was a complete break. But we had lights at our house. The Grandparents and the Great-Grandparents had gas heat and plenty of lanterns and lamps and candles, and could cook and stay warm; they laughed and said it was just like "living back at Home"---the homes of their raisings---to have to spend an evening around the kitchen table, with only the glow of coal-oil lamps, and a jig-saw puzzle for entertainment. (Except, of course, for when DALLAS was on---then everybody came to my house, where we filled up the den and ate popcorn and jeered JR).

So today is nothing in the scheme of weather things. The snow fluff had taken on a new energy when we emerged from the store, whitening the streets and our driveway, and we crunched up the sidewalk with our bags, our hair full of drifty clumps and our footprints filling before we could return. We stomped in, put away groceries, changed to warm dry socks and soft flannel pants, and have been cooking a couple of old family favorite recipes for supper---the meatballs in "red gravy,"---not the pasta kind of sauce, but the raw peppers/onions/canned tomatoes layered in the covered skillet of browned meat with a good shake of black pepper, some salt, and a smitch of sugar, perhaps a bay leaf according to your whim. It cooks down into a fragrant hearty peasanty dish, delicious over rice or mashed potatoes.

I made a big Ziploc of the dry spiced tea mix DD2 likes so much---I'll send that tomorrow if the weather warrants getting out to the P.O. And now the house is again Christmas-perfumed of cinnamon and orange and clove, with a faint haze of goldy-tan upon the kitchen counters. Whisking all the dry ingredients together is an impossibility in the weights of things---the dry tea floats on the arid heft of the sugar and the Tang, and rises like lines of thin flotsam on the edges of a tide. I set the kettle, poured a cup, sipped the familiar old flavors of the Seventies, when Tang was a marvel of wholesome fare, and the dry mix stirred up in countless kitchens for a comforting cup at home, or for bringing out Mrs. Heafner's samovar to impress the visiting Grand Matron, as ladies in hats sipped dainty sips of the exotic, heady brew called "Russian Tea."
I also minced an onion, sweated it in a little knob of butter and some salt, then laid in about 3/4 of a pound of chicken livers, left from the giblet-gravy-making on Friday. I'd saved one boiled egg, as well, from the ones boiled for devilling, to make Caro her holiday favorite: Chopped Liver, to spread warm on little pita-points toasted crisp.

And I just finished cutting up what was always known in our downhome Meat 'n' Threes and cafeterias as Combination Salad---iceberg, sweet onion, bell pepper, a bit of cucumber, some grape tomatoes---to be served with the last of the pimiento dressing from the Christmas Eve slaw.

Caro and I are having a Girls' Evening---dinner on trays at five, and my choice from the big stack of "Classics" DVD's she gave me for Christmas: Austens, mostly, with Jane Eyre and Middlemarch in the mix as well. And since Middlemarch is seven hours, and we aren't going anywhere . . .

I'd say Let It Snow, but I'm not in charge of things. Thank Goodness.
Posted by racheld at Sunday, December 27, 2009

I love your picture, Rachel -- and your story. I'd like to add that along with the rush to the grocery store at the first sight of snowflakes, it seems that southern drivers lose what common sense they have when it comes to driving in icy or snowy conditions and head for the nearest ditch ... lol

I aspire to one day see snow with my own eyes, Rachel, not just in my freezer. :)

I want to see a true winter just once, in my life, and to find out all about where the Christmas traditions fit.