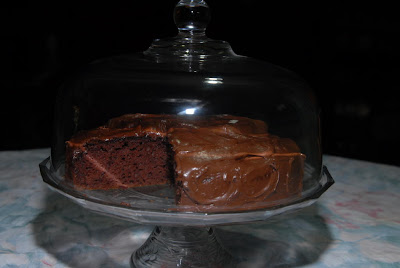 A remembrance not my own, just written down from memories of long talks over coffee with an Aunt in Alabama.


I’ve known only two people in my life who didn’t like chocolate. One was a bit strange in other ways, as well, and the other came by her dislike honestly.

One of the Aunts on Chris’ side married very young---she was fifteen and her husband nineteen when they ran away and got hitched---they had been forbidden to see each other until she was sixteen, and it finally got the best of them. So, when all the younguns got all dressed up in sheets and charcoal-smudge whiskers and GrandDad’s oldest clothes on that still-warm Halloween night, they dressed up, too. She had worn clothes-under-clothes for several days, sneaking them out into the barn and stashing a couple of outfits and her best dress and shoes in a pillowcase beneath some old stuff stored out there.

On Halloween, she put on a long gingham skirt and and one of her Daddy’s old shirts over a dress, crammed her stockings and her Bible into her purse, and then “went walking” with the rest of the young people of the community. They were, indeed, of the soap-your-windows era, along with the tip-the-outhouse and some skylarking young gents were known to have opened the front door of a rival’s house and turned two pigs and a turkey in on his Mama’s best India rug.

Aunt Birdie Mae met her sweetheart down the road and they set out on his horse for the next county where he had kin, and where they had visited the church, and knew the preacher. So they were married the next day, staying with his kinfolks for a while, then coming home to a very cold reception from her family.

One of his married brothers had just finished building a new little house for himself and his own bride, and they asked the newlyweds if they’d like to stay with them for a bit until things cooled down. And they did, with nothing but his steady job and the clothes she had carried from home, and apparently they lived on there for quite a little time, for the main part of the story occurred on over in the hot Summer down there in Grand Bay.

The two young women got along pretty well, with the division of labor around the house and yard and milking-barn divided about 70/30, Aunt B said, in favor of the hostess. Aunt B did most of the cooking, all of the kitchen work, a lot of the animal-tending and the milking, whilst her sister-in-law quilted and tatted and made clothes all the Winter through.

Then, in the Spring, the menfolks plowed up the garden plot, and Aunt B. planted and hoed it, then canned everything that wasn’t needed for the three-meals-a-day for the four of them. It got hotter and hotter, she said (and I believe her, for we’ve lived in southern Alabama, too) and the canning seemed to stretch on forever.

The BIL and SIL would go to town almost every Saturday afternoon from the farm, getting the week’s staples such as coffee and sugar and tea, and perhaps some fabric for a new dress, and they’d spend the time visiting up and down the streets with friends and shopkeepers, always stopping at the drugstore, where they’d have a cold Cherry Phospate, with real cracked ice.

And Aunt B., seldom invited on these trips, would stay home on the place, week after week. And every Saturday, she’d pray for the couple to just get gone for a little while, just a breather from the constant companionship, so she could wash her hair and dry it in the sunshine of the yard, and sit in the swing in the shade a bit without a pan of peas to shell in her lap. The noon dinner dishes done, the floor swept, the shoes polished for church in the morning, and a bit of respite in sight, she hoped.

BIL would pull the buggy up to the yard, while SIL checked her hat in the mirror, then she’d walk out onto the porch. Aunt B. would watch her go, relief almost overtaking the fervent prayer that she’d just GO, and then it would come:

Every week without fail, SIL would stop on the porch and turn, or she’d get all the way up the step into the buggy, settle onto the seat, turn to Aunt B., tuck her head coyly, and say, "Chock-littt CAAAAAAKE, Birrrrdie,” in the most annoying voice in the universe. She’d blink beseechingly, with a little smile that knew she couldn’t be refused, since they were so beholden to her and her husband for the roof over their heads.

And so, Aunt B. would plod into the kitchen, get out the bowls and the spoons and the sugar and the Hershey’s can, throw some more wood into that already-glowing woodstove, and start mixing batter and frosting. I can only imagine that sometimes she didn’t plod. I like to think that some days she'd bang things around some---stove-lids and sifters, or yell out what she REALLY wanted to say in the stillness of that empty hot kitchen, or even have to go all the way out in the yard to get those cakepans and spoons from where she’d hurled them.

But she made that cake, every blessed Saturday that they lived there. She worked in that stifling kitchen every week, baking the layers and cooling and frosting, heating the whole house past bearing in that Summer sun, doing her part to help with their upkeep.

And I never DID see Aunt B. eat chocolate---not once. 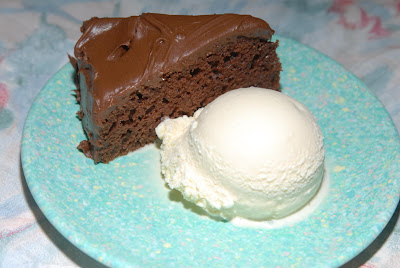 Not us---I made one yesterday, and this was breakfast.
Posted by racheld at Tuesday, May 04, 2010

Good morning Rachel, I have been MIA this past week for the most part. My life sometimes, really most of the time, gets soooo busy. I have missed your lovely posts.

I enjoyed reading your chocolate cake post today. A very cute story. I think if I had to bake that many chocolate cakes on a weekly basis, I would not want any either. My true love is pie.

I am going to scroll down and read the posts I have missed.
Have a wonderful day.
Hugs, Jeanne

Delightful story. Thank you for sharing that and the pretty cake.

That is a good story! I feel for her - goodness!

I wonder how long it was before they got a place of their own. I'm guessing she didn't bake a chocolate cake once she had a kitchen of her own!

Thanks for sharing that, and thanks for your comments. You're so very kind and I always appreciate hearing from you.

I loved the story...and could almost feel the heat of the hot kitchen! I have cooked when it was hot, no AC and had to drag myself. I would have hated chocolate too I think! However...I don't, and it shows! :)
I loved your post!!

I loved this story, Rachel! Bless her heart. I guess she really felt stuck. Having to live there and having to make that cake!
Now, chocolate cake for breakfast? Why, that sounds perfectly reasonable to me! And, yes, I think I WILL have a slice!

Oh, I had another thought.

Have you read the book "The Help"? I think it is still on the best sellers list. I think you would enjoy it since you lived in the South. BUT, there is a chocolate cake story in the book to die for! Read it!!!

I enjoyed this story, Rachel. I can't imagine sharing all that "togetherness" in a small house, and knowing every week that your precious time alone would be spent in a hot kitchen. No wonder she didn't like chocolate cake!

I've been listening to the audio book of "The Help," and have enjoyed it so much. There are several readers for the different characters and it adds so much to the book. I think you would love it, and be able to relate to it. It's set in Jackson, so I enjoyed that about it, too.

I, too, am midway of THE HELP, recognizing people and places and events. Sis sent me a sub to AUDIBLE, and it's at my disposal anytime I'm doing housework or dishes or cooking.

The voices are spot-on for the area, aren't they?

So Far, they've only hinted at The Cake, and its repercussions.

Oh my word, how I feel for that fifteen-year-old bride! No privacy, and heiress to all the humiliations of the Poor Relation. Haunting stuff, Miz Rachel.

Poor Aunt B. The story just makes my soul ache. May we NEVER, EVER take advantage of folk.

I wish I'd been at your house for that chocolate breakfast!

It's just so good to hear from everybody---I didn't know quite how this one would be received, for it was a bit downing.

The facts were exact, and I just kinda put my own feelings into the way she might have reacted (especially throwing stuff in the kitchen, and believe me, with a WOOD STOVE to contend with, heating up the whole house for the next 12 hours---you'd have heard me clear where YOU are).

I'm always delighted to see a new number on the "comments" button, and such a varied group today!! A lot of wonderful bloggers on here today; I SO appreciate your looking in, as I admire and respect the work of each one of you.

And my Darlin' Maggie!!! My dear Cousin!! It seems like forever since I've seen you---will e-mail soon.

That chocolate breakfast can be in the oven, cooled, frosted, and under the cakedome before you get as far as Louisville---hint, hint.

Anybody else, too!!! Want me to MapQuest you?

This is not a good website for someone doing Weight Watcher's. Just sayin'.