Today, and every day, I REMEMBER. 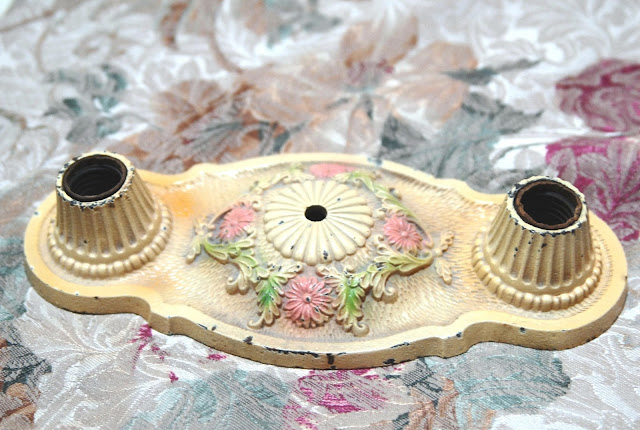 Just wishing Happy Fifth Birthday to ’s Pink Saturday tradition.   Do go have a look at all the wonderful creations and finds and cuisine and flowers and all-things-pink that people are showing.

My show-and-tell this week is an old “light fixture,” from Mammaw’s first house (but not from when she first HAD the house.   Electricity didn’t come to them until the late thirties, bless the TVA.     Mammaw and Grandpa moved into that house on the day that they married in 1917, and not until Mother's brother was about fourteen and an electrical savant, did they have “current” in the house.

I cannot imagine how my Mother and Uncle Lee ever did their homework or read at night, let alone the crochet and sewing that Mother did.   How did she SEE to thread a needle or pick up a stitch in the light of the several coal-oil lamps?

You just screwed in a bulb GOD BLESS MR. EDISON, giving the hanging chain a little tug to illuminate the darkness.   I was just mentioning the other day how the recent hot weather and the spotlight-bright Sunlight Bulb over the breakfast table down here conspire to transport me some days to those HOT Summer nights of one-bulb-in-the-ceiling and the beetle-buzz against the open screens, as we shelled peas or just talked awhile or listened to the Grand Ole Opry on the wooden radio that looked like a little church, or maybe Sister Rose coming to all her air-waves friends from Del Rio, Texas, where you could order a crocheted wall-hanging or couch-cover of The Lord’s Supper for just 3.95.
By some sort of common consent, the lights were always out for Pam and Jerry North and Inner Sanctum---it just seemed fitting.

Something about an unshaded lightbulb is so reminiscent of the times of my life---the high-ceilinged yellowing bead-board in the three rooms of Mammaw’s little shotgun house, with the family pictures hung on the walls along with the Cardui calendar and a couple of  navy-blue-velvet rectangles printed with a glittery HOME SWEET HOME and THE LORD WILL PROVIDE.

Of course, when Daddy tore down the old house in the late Fifties, the NEW of the whole thing called for nice brassy  glass-shaded Sears Roebuck fixtures in every room.   Two of the old lamps continued to sit on the dining room dresser “in case the lights go out.”

It retired its role in the scheme of things, being set on mantels and tables and used as a centerpiece candle-holder over the years, spending almost as much time relegated to a dark drawer.   It sits now up on Chris’ “old stuff” shelf, testament to the old ways and new conveniences which have stretched across time from grandparents unto the fifth generation now.

It’s “vintage,” I suppose, and considering its almost-ninety years tenure in the family, it will soon become a genu-wine antique.  May we all look this good at a Hundred. 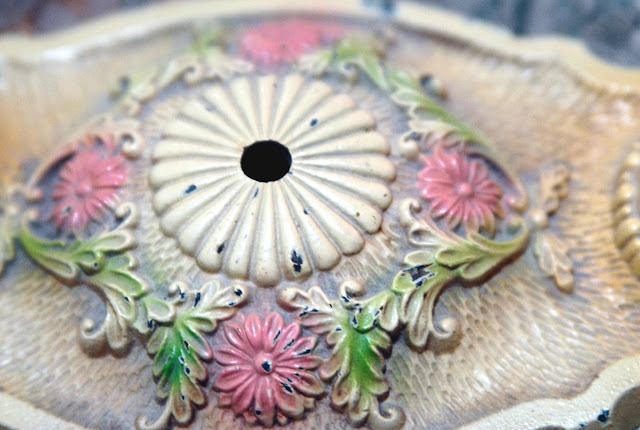 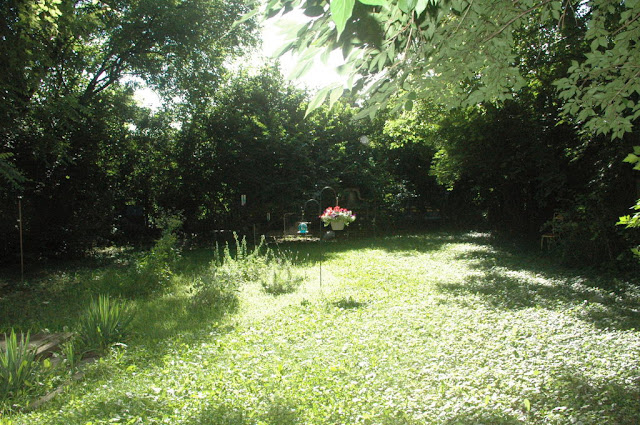 When the view out toward the arbor needs a haircut and a shave, and the little activities outdoors tend toward finally getting that old snow-blower snugged away til the distant dreams of ice, there's just a feeling in the air.   The scent of SPRING, right here on the almost-cusp of Summer, and the siren call of all those racks and stacks of plants at Lowe's and Home Depot beckon us all.

Weekends at Lowe's are some kind of a natural phenomenon, I think, with great baskets and carts brimming with plants trundled into trunks and tailgates by the hour.   I suppose it's our modern-age version of searching the woods and roadsides for sass and cress and poke sallet to sate the Winter's hunger for green.

We've had a nice team of guys here for several days, off and on, getting us spruced up for Spring, and today the schedule includes a good session with the power-washer on concrete and house.

More plants, more cleanings, tables and chairs and pots to arrange, and the yard will take on more of the air of a retreat than an obstacle course.  Just to sit quietly with Nook and iced tea obtains a more refined air when you're sitting in chairs freshened up and arranged, and not having to choose from the dusty array folded haphazard against the house.

And whilst I dream of a Southern-lush lawn, sandal-stepped by ladies in gauzy gowns and hats, with a Monet-array of roses and teapots and sandwich stands arranged on lacy cloths, do take a look over at today's FRIENDSHIP TEA.

Miss Linda is a hostess par excellence, with a room specially built for tea parties, right there in her own HOUSE.   You'll feel transported to the most elegant tea shop, the most gracious and welcoming of places and times.  Wisht I'da been there.
Posted by racheld at Thursday, May 23, 2013 4 comments: Links to this post

EYE OF THE BEHOLDER 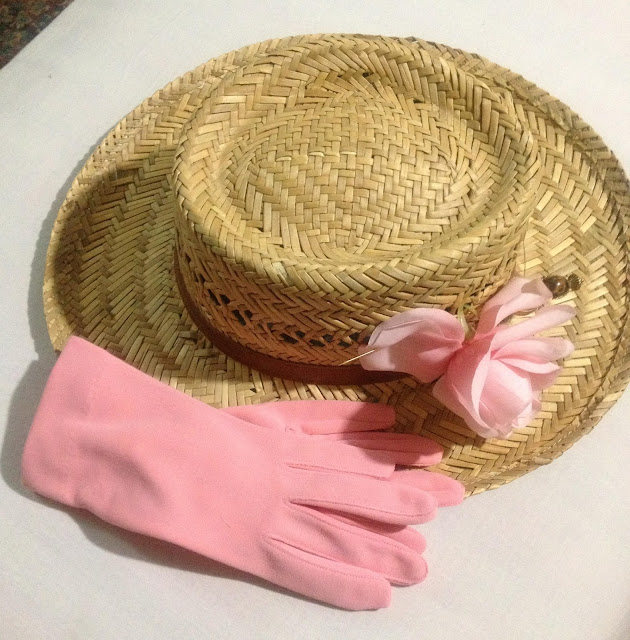 The tea at Sweetpea’s school was marvelous and the program wonderful. And, in addition to the pink gloves, I even pulled out the LEATHER SANDALS, then went looking for a suitable hat to befit her expectations (none, actually---she just said "a dress") and of all---ALL the hats Chris has acquired over the years for photo props and GRANDS pictures---there were only FOUR accessible. TWO BLACK VELVET and ONE MINK, with an immense red-sequined number worthy of any street corner in . None quite suitable, and I could SEE the big plastic box of the others in the FARRRRR corner of the storeroom, behind everything else we own.


So, I did what I do when we do make-believe anything---I improvised. Chris' summer straw, with a huge pink silk rose from last-Spring’s candle-ring and an enormous hatpin which holds up a curtain downstairs. Sweetpea's surprised, delighted face when I walked in, all gloved and hatted, was well worth all the probably-unbelieving looks I must have gotten from all the Moms in the room---Sweetpea's Mammaw and I were the oldest two at the party, and I could just imagine the thoughts running through the heads of all those beautiful young slim-jeans, high-booted women pushing strollers that cost more than my car.

They saw us---Mammaw in her seamed slacks and Teddy-bear sweatshirt and New Balance shoes and cane, and me in a cobbled-together hat--Chris' Summer straw with the tee-ninecy spot where an errant honeysuckle limb broke a straw and left a small vent, with the big old gold hatpin pierced through two flappy petals of a frowzy rose snatched off a centerpiece. 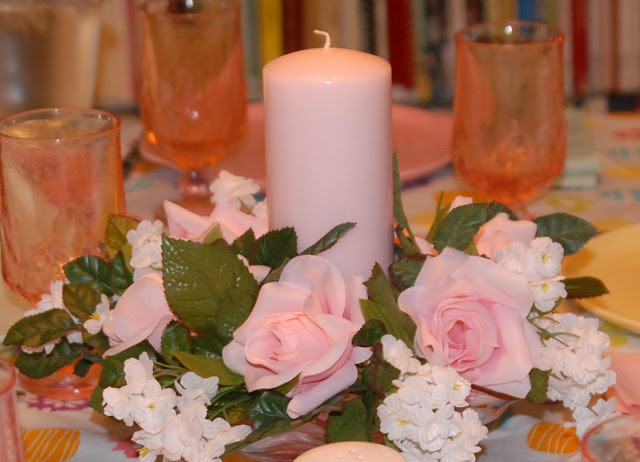 And though they didn’t give us that up-and-down dismissive Miss Grey glance toward the Dashwoods, there was probably just a wee bit of disbelief there. 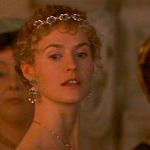 Her Mammaw was any nice lady you see at Saturday flea markets, at flower and lawn shows, musing over cake mix in the Kroger aisle.  I, on the other hand, was probably received as one of those trying-too-hard-with-whatever-tattered-finery-I-had-left---one of the dear old biddies who refresh and re-pin and re-hem from season to season.   Neither the boozy élan of Blanche DuBois nor the genteel hose-darning of a Miss Bates, but quite a step above The Queen of the SilverDollar.

The grown-up guests probably had no idea it was just something we DO at home for dress-up, and not just a dotty old lady who should be wearing purple and might any moment start gobbling up shop-samples.