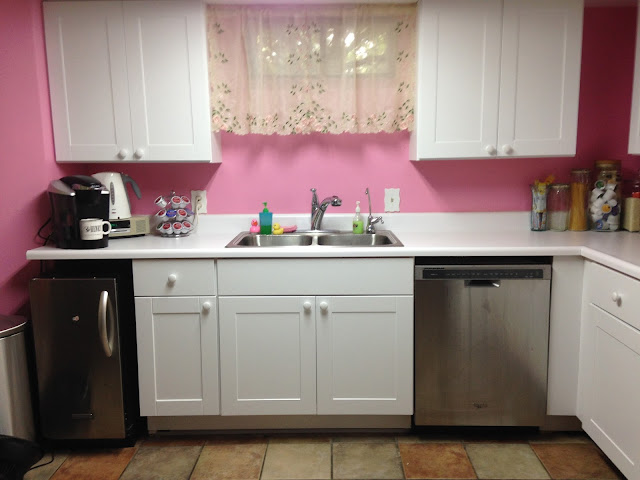 For those of you who took yesterday’s post to mean we’re all catch-as-catch-can with the kitchen for Thanksgiving and a week of Grands for a visit---be not dismayed.   The kitchen is its shining self, with everything back in  place on the walls, cabinets re-filled, canisters and utensils in their new homes, and good scents emanating from that direction this minute.   It's just that we took DOWN some of them a month ago for some work, then gave up and put them back up because five of the chillun will be here tonight, to spend the week.

The only thing was a late-discovered electrical thing which precludes running washer and dryer at the same time as any other appliance or plug on that one breaker.   So the thing to do was take down one new cabinet and the huge microwave shelf, so as to get at the breaker box.   The dear guys came and removed those way back in October so the electrician could come at any time, and the contents have been strewn across both breakfast and dining tables, with the two cabinets scrumped beneath the big table.  No big thing in the scheme of, but disheartening to think I was going to get it all done Halloween, then the NEXT Saturday for sure, and then by this Monday, we just decided to heck with it, had the men come replace cabinets, and told the electrician NEVER MIND til after Christmas.   Not in capitals, but by then, I was quite of a mind to shout.

So we’re perking along.   Top picture is the completed kitchen.
The corner with the big old homemade shelf, with Mammaw's big Homer Laughlins on top: 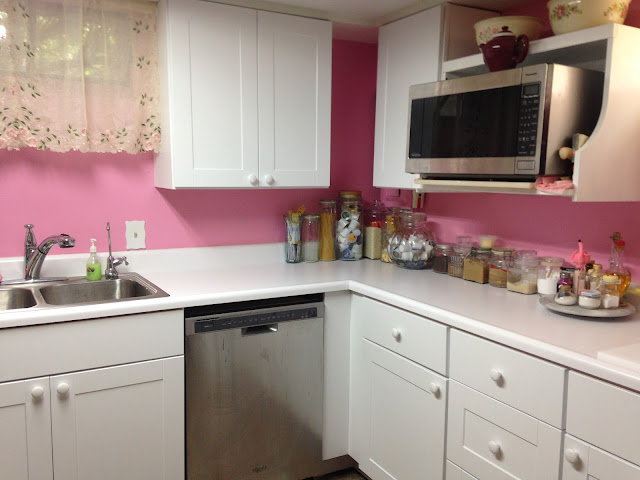 I love the ombre line of sugars, most with vanilla beans inside: 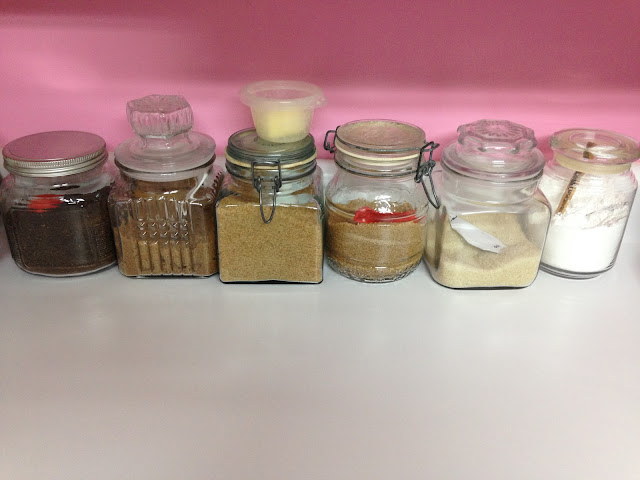 The gaudy group of utensils, in an old crocky pitcher and a modern stand. 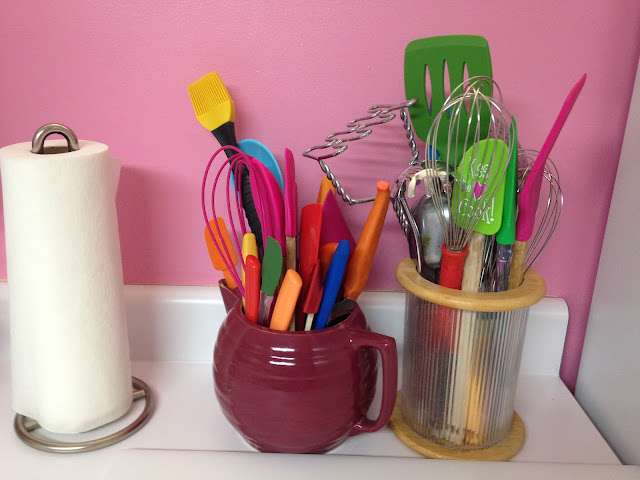 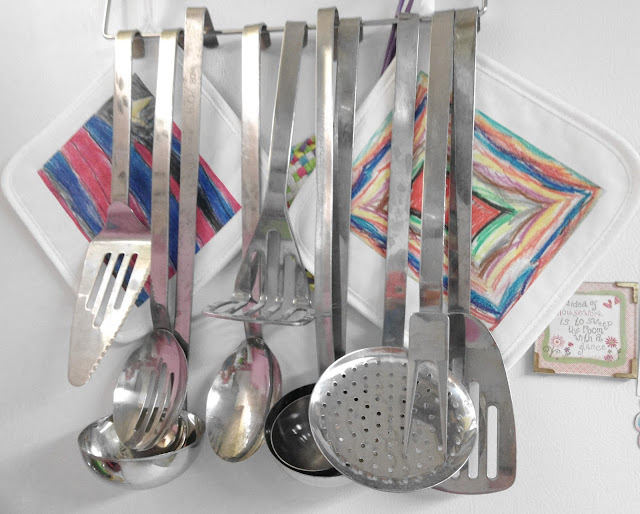 And if I had the picture I just took of Chris, out valiantly scraping the inches of snow off the windows after we got caught in a white, downy blizzard of what looked like enormous cornflakes, wet and clumpy, when we came out of the grocery store, I'd be posting that one, too.   It brights me most of all.
Posted by racheld at Saturday, November 21, 2015

I am so in love with your pink kitchen! We finally had an electrician in ourselves. Our issue was running a window air conditioner and the microwave at the same time. Totally my fault as I had sited the window air conditioner in a different window before we built our addition and it didn't work out as well. We lived It for a few years and by the time he came we had a list a mile long. (for example, we discovered that when we poured our new driveway, a stake was put through the underground wires leading to our garage - you know, that kind of thing). It cost a small fortune and took an entire day. We needed to upgrade the service and put in a new box with more whatevers and he even found live wires up in our attic from the previous owner in the 1970's. Worth all the aggravation and money. Although I wish we could spend it on something more fun! Enjoy the Grands!!!!!

Just an awful thing to have to go through after just getting it remodeled. Have a wonderful time with the grands. Love your Mammaw's big bowls. Happy Thanksgiving Rachel. Wish I could eat with you.

OH- that is so discouraging to be waiting for something and keep having it get postponed. Last year I was without an oven for almost 3 months as we waited for the new one to get here and then had to alter the cabinet it was in. I did not bake a single Christmas cookie last year---thought I might have a withdrawal breakdown but I made it through! lol

Your pink kitchen is just adorable. it makes me smile just to look at it! What a fun place to work. Glad it is put together while the kids are home. xo Diana

It is hard when you have to go back but it will be right as rain. It looks so great. You have worked hard to get it where it is now. It is such a cheer filled kitchen.

Love your sweet pink completed kitchen. Have a blessed Sunday!

Oh boy, it looks like you are ready to go for thanksgiving. My kitchen is so small...I would have no room for repairs and me. LOL. Blessings to all at your house, xoxo,Susie

I found me some pink salt after you posted about it.
I ran across a recipe that call for coconut sugar, that is a new one on me, like the pink salt.
Happy Thanksgiving

Hello Rachel, I am visiting you from Florida and the photos of your kitchen are so pretty. I love the tile floor too. You know I also love the hanging utensils and the pretty bottles and jars lined up on your counter. Useful items looking so nice in the jars is the look of practical and designer thinking. Big smile here. You sure went through a lot getting the beautiful kitchen of your dreams. Is that a wine cooler on the left? I would love to have one but alas, no room.

I missed posting for Pink Sat. yesterday because of the longest road trip ever to our daughter's home in Orlando. We hit a terrible traffic jam on the turnpike in Florida. Three hours delay. We were in our car for 14 hours before we finally arrived at our destination very late at night. Then off to the football game at 8:00am the next morning. The Gators (U of F) won their game for the winning season of 10 wins and one loss. As you know, four of our grands attend college there and we did have a wonderful time visiting them at their apartments...finally.

I know your home and beautiful kitchen will be full of laughter and love with your grands and loved ones all around. Not to mention the delicious food you and Caro will be serving for Thanksgiving. We will be having the same wonderful Thanksgiving here with out daughter and family. We shopped for our recipes today and have a lot of work ahead of us for giving thanks on Thursday. One of our grandsons that we rarely see will be here and we are thrilled. He is our son's younger son who lives in Orlando. He is 23 and on his own so he is looking forward to some good food.

I think your kitchen is just lovely. I love how you have everything set up so nicely. So sorry about the electrician though. Almost a month trying to get to you? That's just ridiculous! I would have put it back together again too.

Hope you have lots of fun with your family and enjoy that new kitchen!

"Ombre sugar", now that is a term I've never heard of until reading your post, but it sure does fit perfectly for your array of sugars.

It must feel like a huge relief to get your cheery kitchen back in place, especially in time for Thanksgiving. Those HL bowls are made for large doses of baking, which, I'm sure you oblige.

Have a very happy Thanksgiving with your family. I'm sure that kitchen is about to get the work out of its life!

Such a neat and organized kitchen...all pink and white and fluffy....it is adorable.
Now, I've gotta go clean my counters of clutter...AFTER I finish cooking and baking. :) Happiest Thanksgiving.
xoxo

Rachel, I just wanted to let you know how touched I was by your sweet comment about my Dad that appeared on my post. I love that picture of him with his turkey. I have been told by numerous people who knew him that he was a wonderful man. He was killed by lightning during a sudden thunderstorm when Mom was 5 months pregnant with me.

And what a sweet story you share with me about your husband killing a turkey. Oh, how memories are made! And as we age, how precious they become.

I hope your Thanksgiving was wonderful. I am blessed to have such sweet friends such as you.

I LOVE the pink. Seeing it makes me feel like I know you a little--a window into the soul (a kitchen). Glad to see you have a wonderful, efficient, crisp and cheerful place to do your cooking.

Rachel, your kitchen is looking oh so pretty in pink. I love everything. And, I smile thinking of Homer Laughlins. I have a few of those myself.

But, my biggest smile comes thinking of you cooking all kinds of tasty fare in your long anticipated and hoped for kitchen of beauty. Love will be made there.♥

Well, see! I knew everything had to have been all fixed up by the time I got here! Have I told you how much I adore your Dream House kitchen? It's like a sweet kiss!