Linking to PINK SATURDAY over at ’s house. Jellybeans in two shades of my favourite colour---PINK! 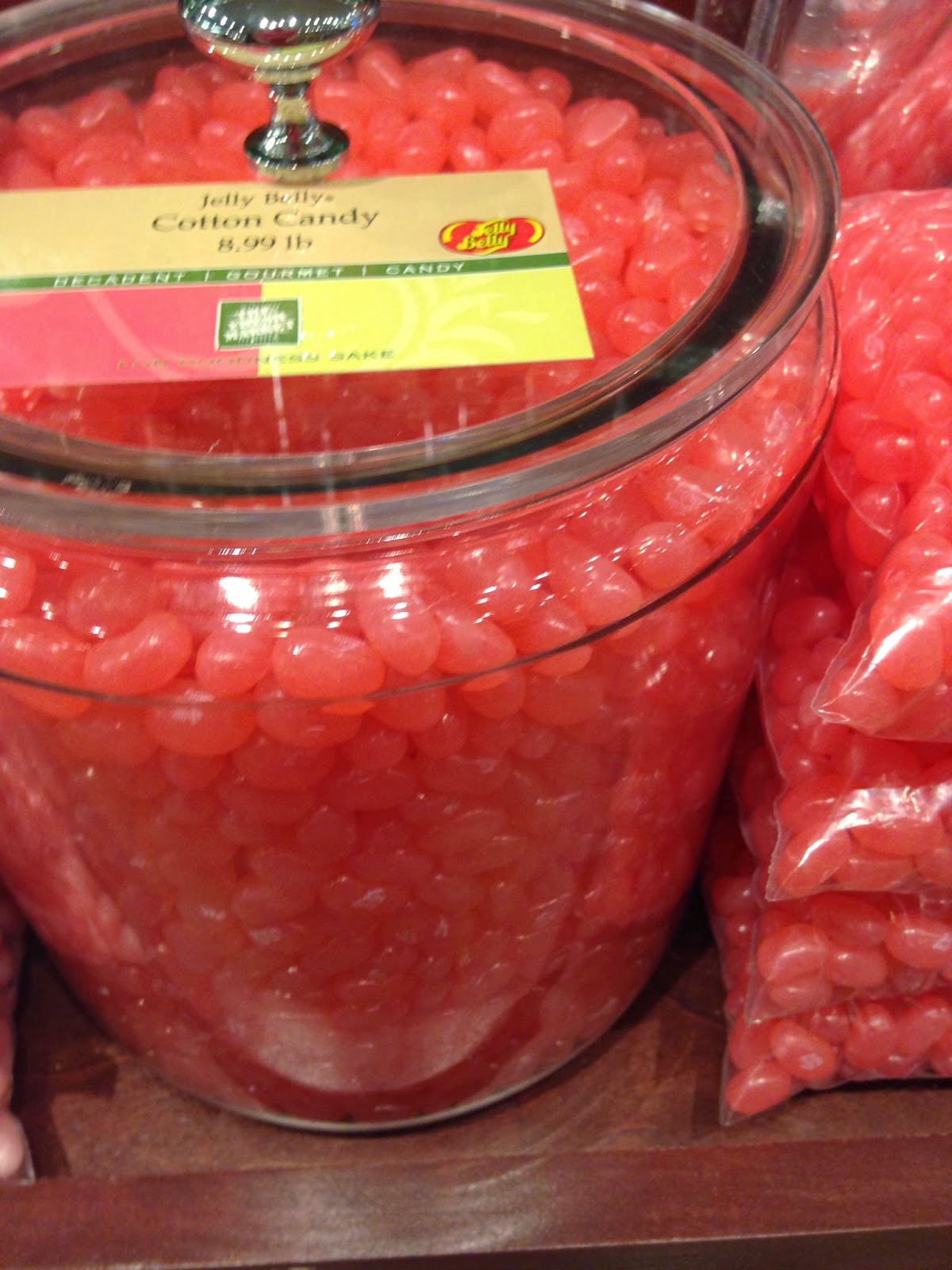 We found a whole treasure-trove of memories in the candy aisle of  Fresh Market last weekend: 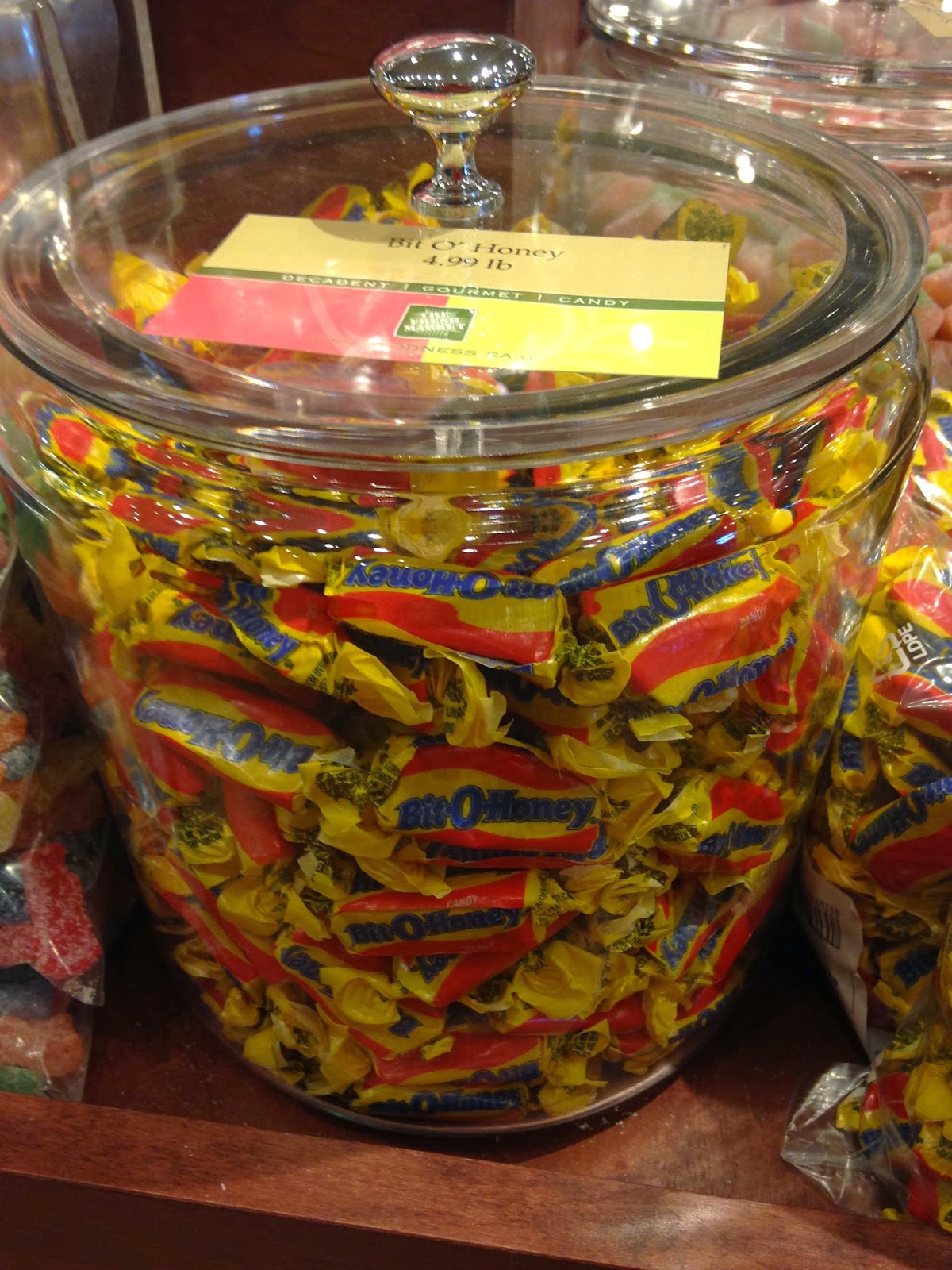 Bit O Honey—little planks of candy which, if you stuck them in your mouth like a stick of gum, might separate into two distinct layers, with a little slick of honey between.   Or they might get stubborn, get a vise grip on your top AND bottom molars, and have to be coaxed with tongue and fingers to let go before you lost a tooth. 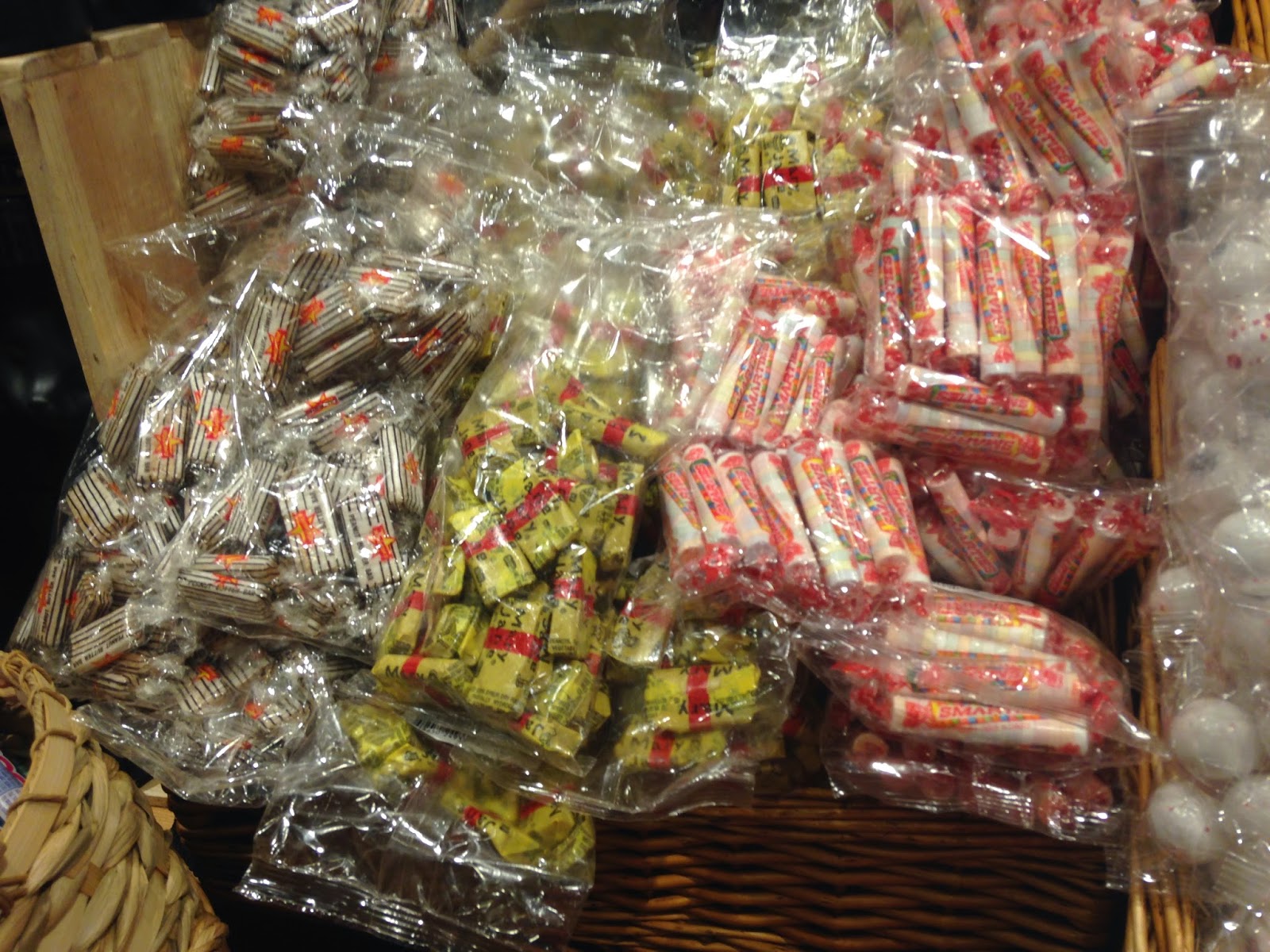 The brown-striped ones to the left are the “Peanut Logs” with a tiny strip of peanut butter encased in the most ethereal pearly sugar shell.   Placing one in your mouth and crunching it whole was the only way to keep from scattering all those shattery, thinner-than-paper layers of candy down your front. 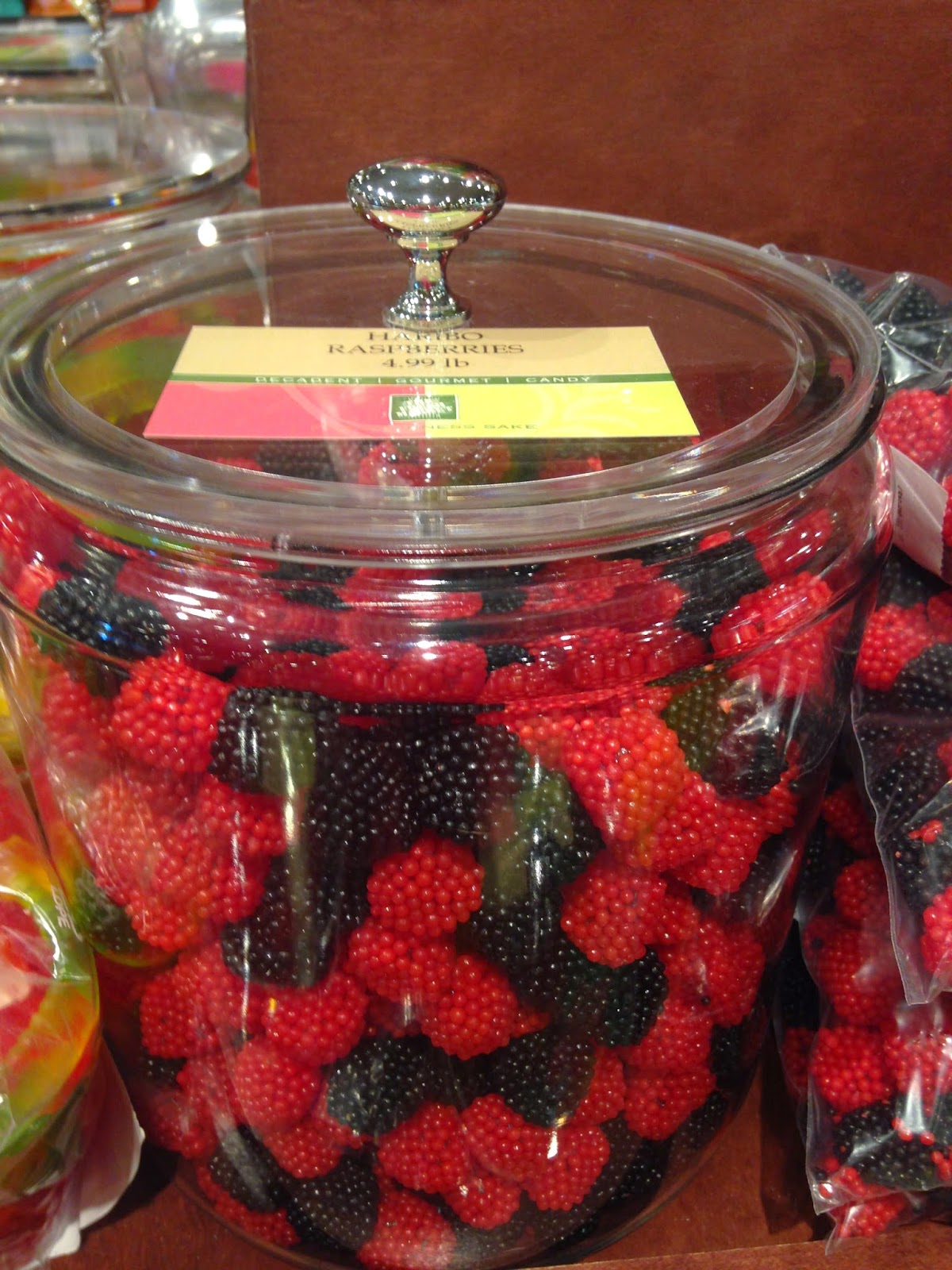 The beautifully-formed “RAZZberries” of my childhood.   They’re a wonderfully satisfying crunch of burnt sugar, and then the richness of a fat peanut.   I found them wonders, as well, because I could never figure how they made such perfect little berries, with each shining bead formed true around the nut. 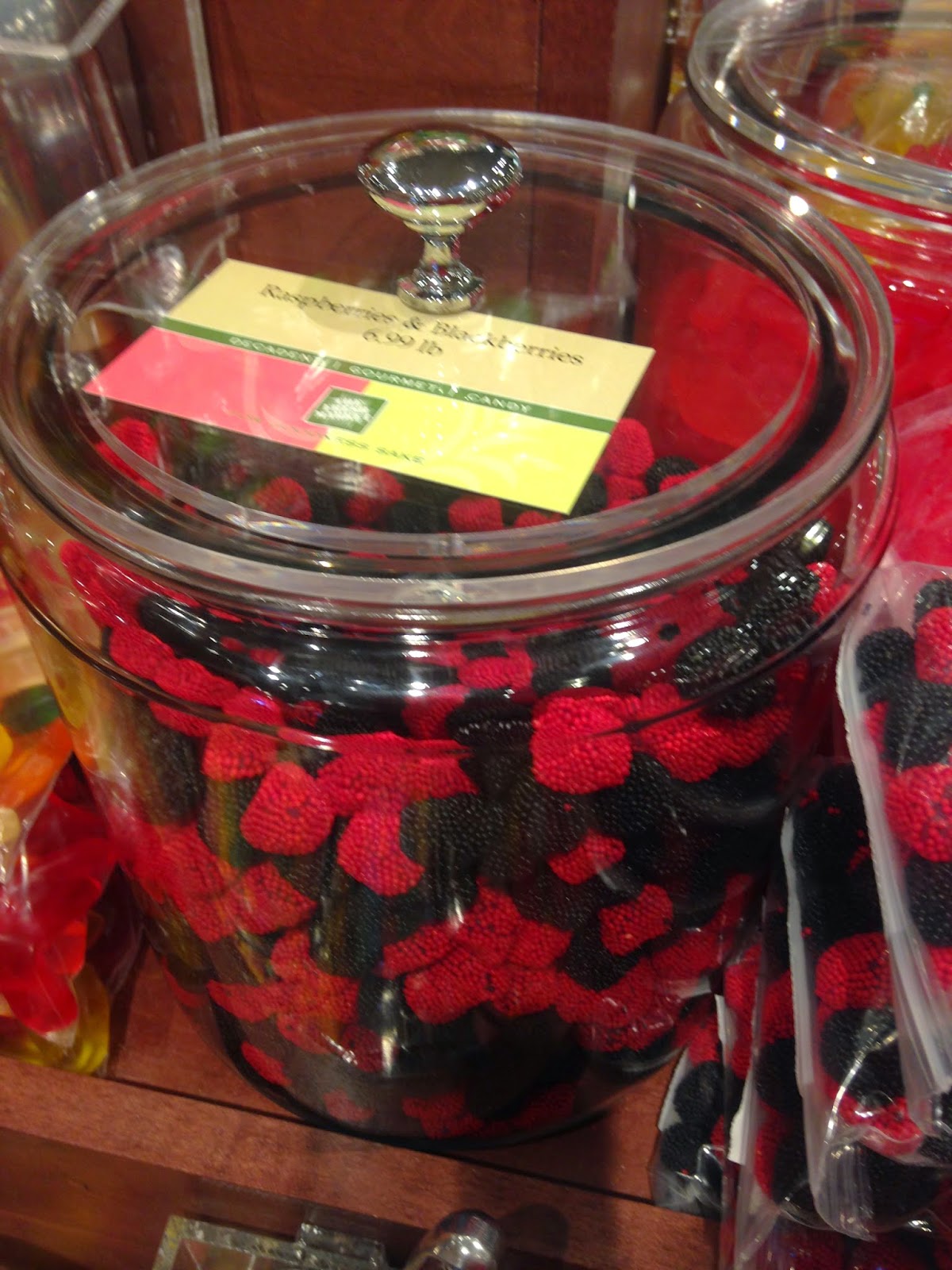 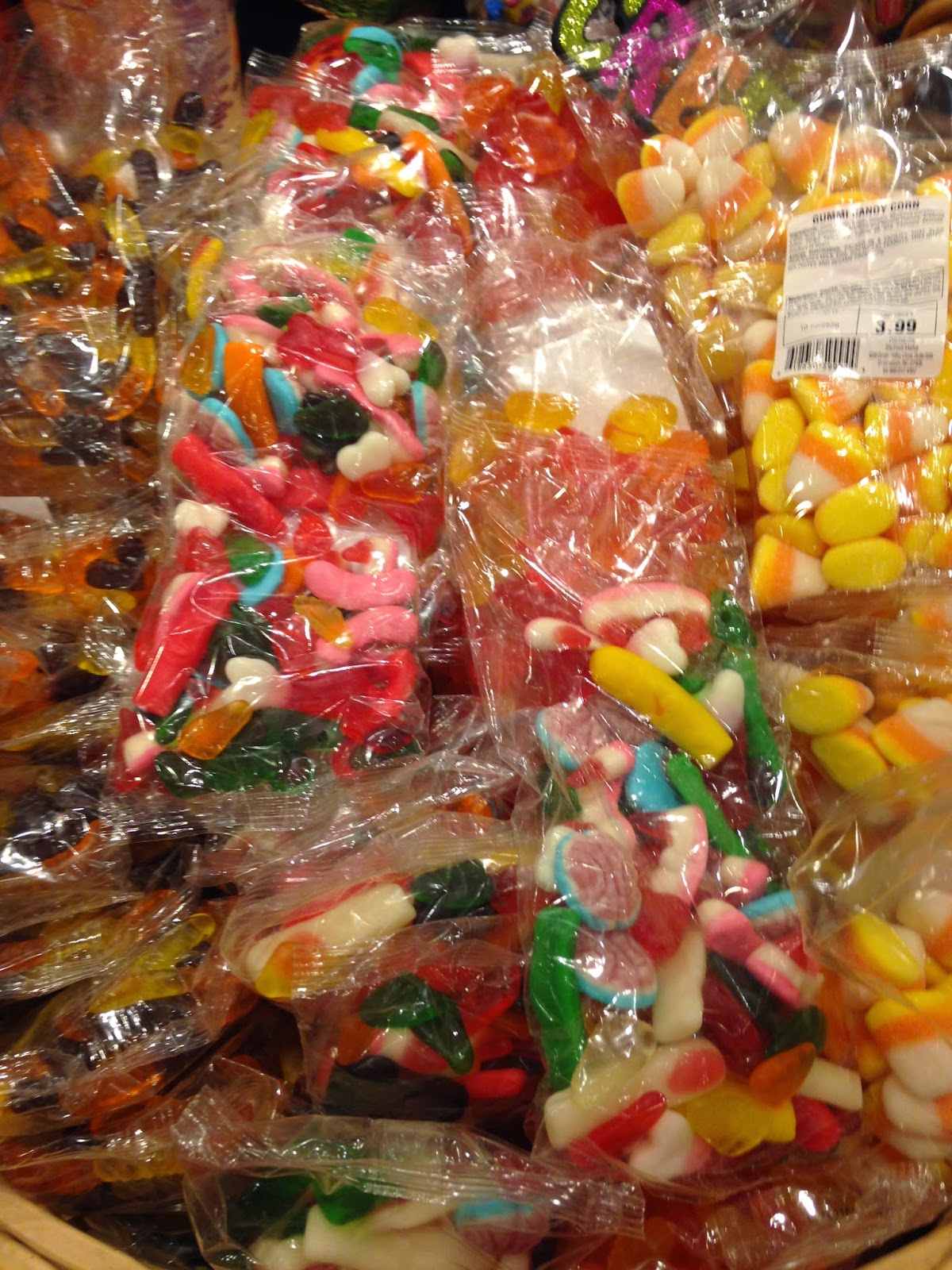 Assorted goodies from the scoop-jar---Aunt Lou offered a two-cent scoop, or a nickel scoop---wielding junior and baby versions of the great big ole silvery ones in the barrel-halves of dry beans. 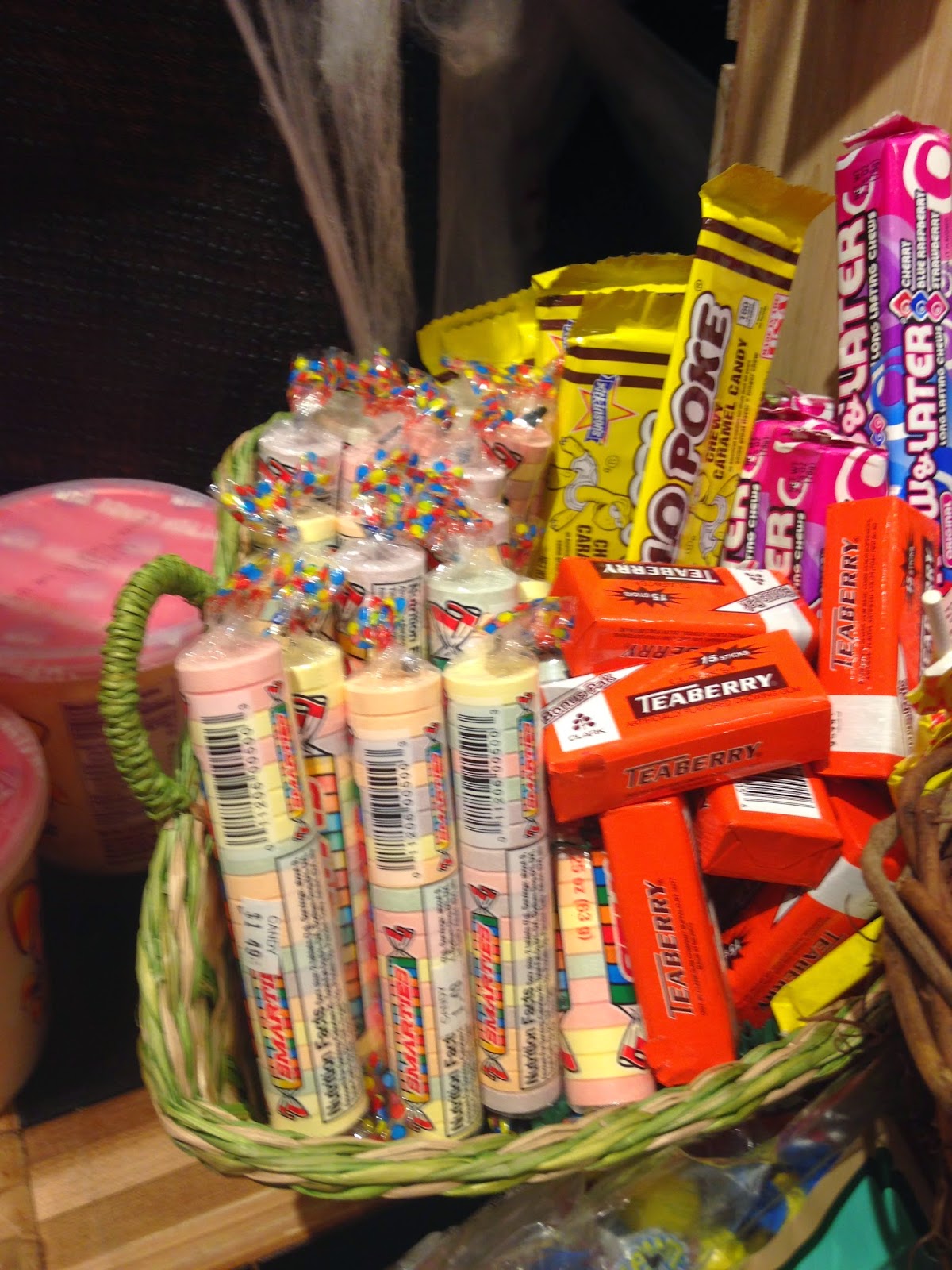 The Smartie rolls which started the whole reminiscing thing, though I never ate them---they just now reminded me of Neccos, like dusty rolls of nickels in several tanny pastels, all with an intrusive overlay of licorice from the few powdery black ones in the stack.

Slo-Pokes which would also perform all sorts of dental mischief, and Now and Laters, which I never understood the name of, except that they were what we called "pocket candy," which you never ate all at once, but carried around til it was all gone, or Miss Reed confiscated it during Spelling. 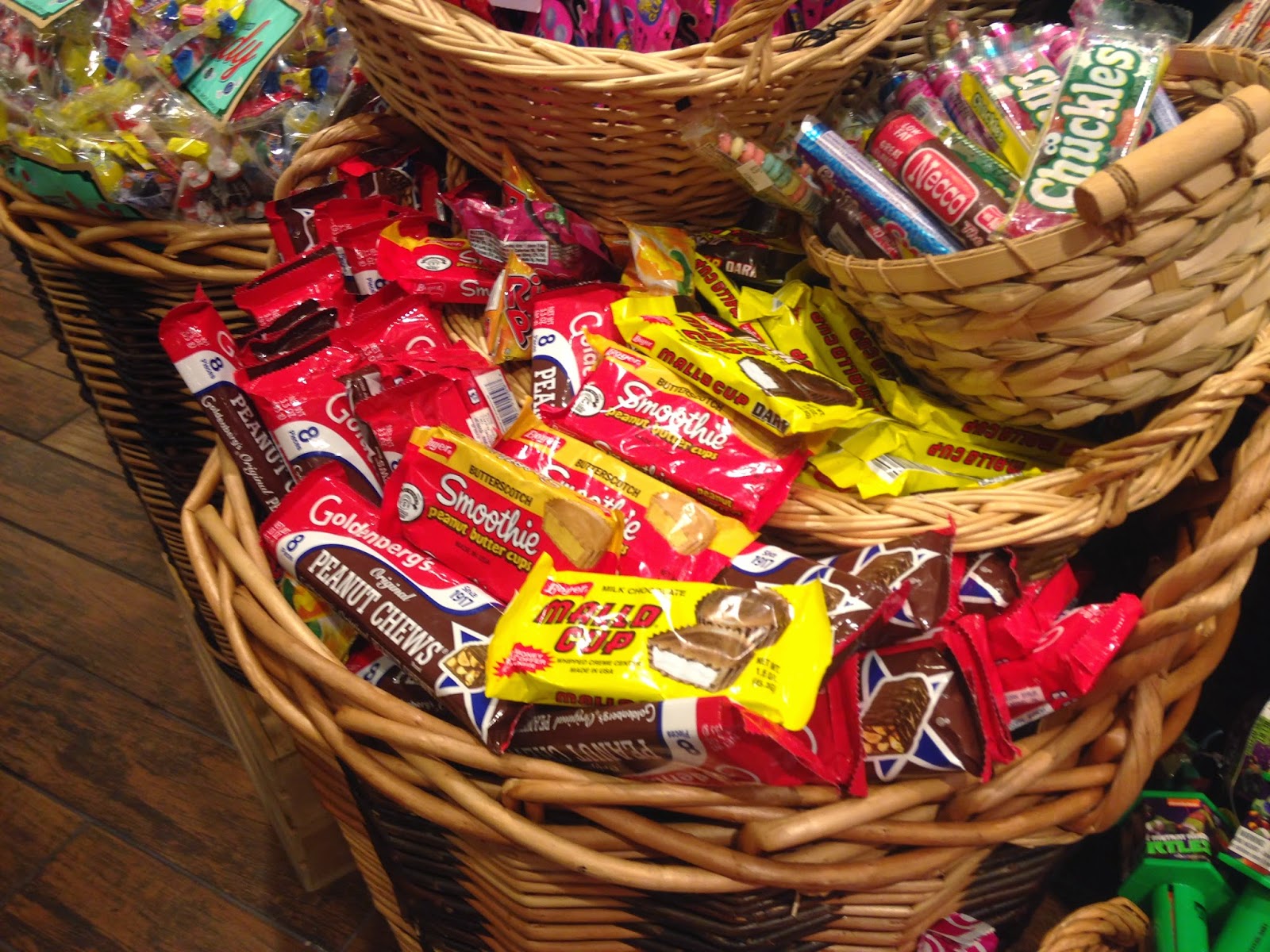 It was a rare and loyal friend who would open the Mallo-Cup paper and hand over the spare. 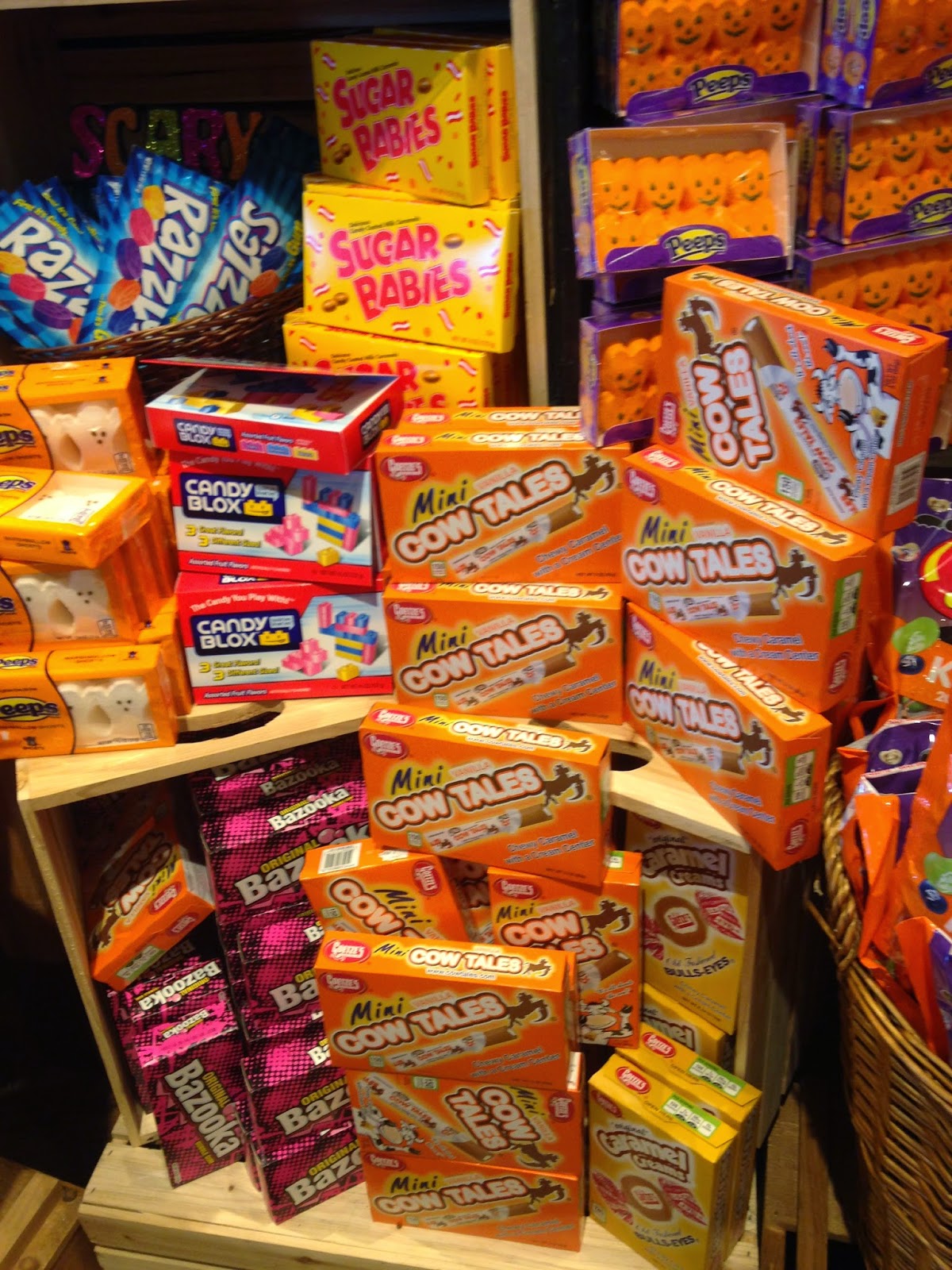 I didn’t even notice the BAZOOKA packs---I wish I’d bought one just to hold it to my face and inhale that unmistakable scent of childhood:  Bubblegum. 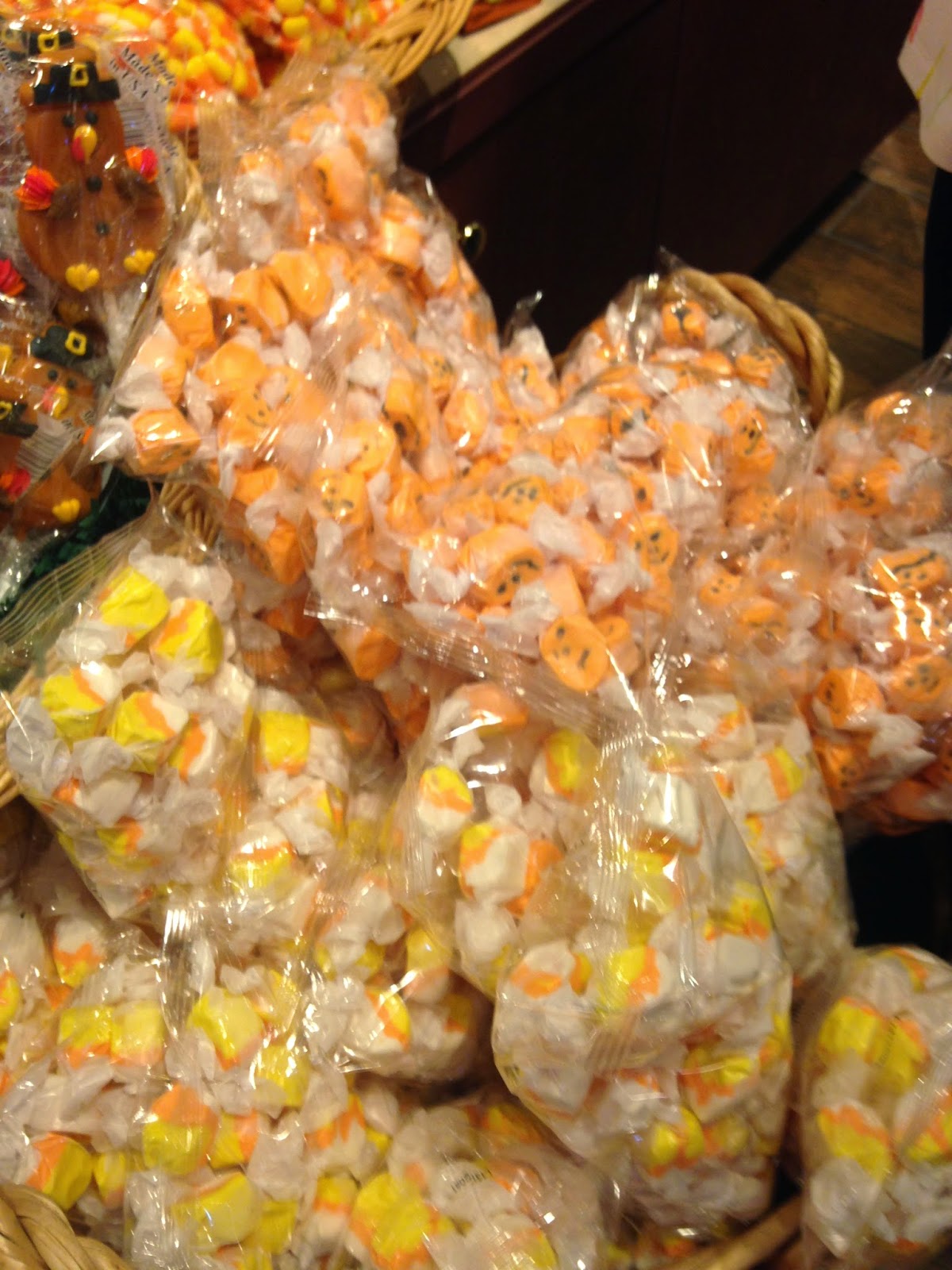 Various colors of taffy---close, but still without the charm and homemade touch of the Good Stuff made by The Misses Milam. 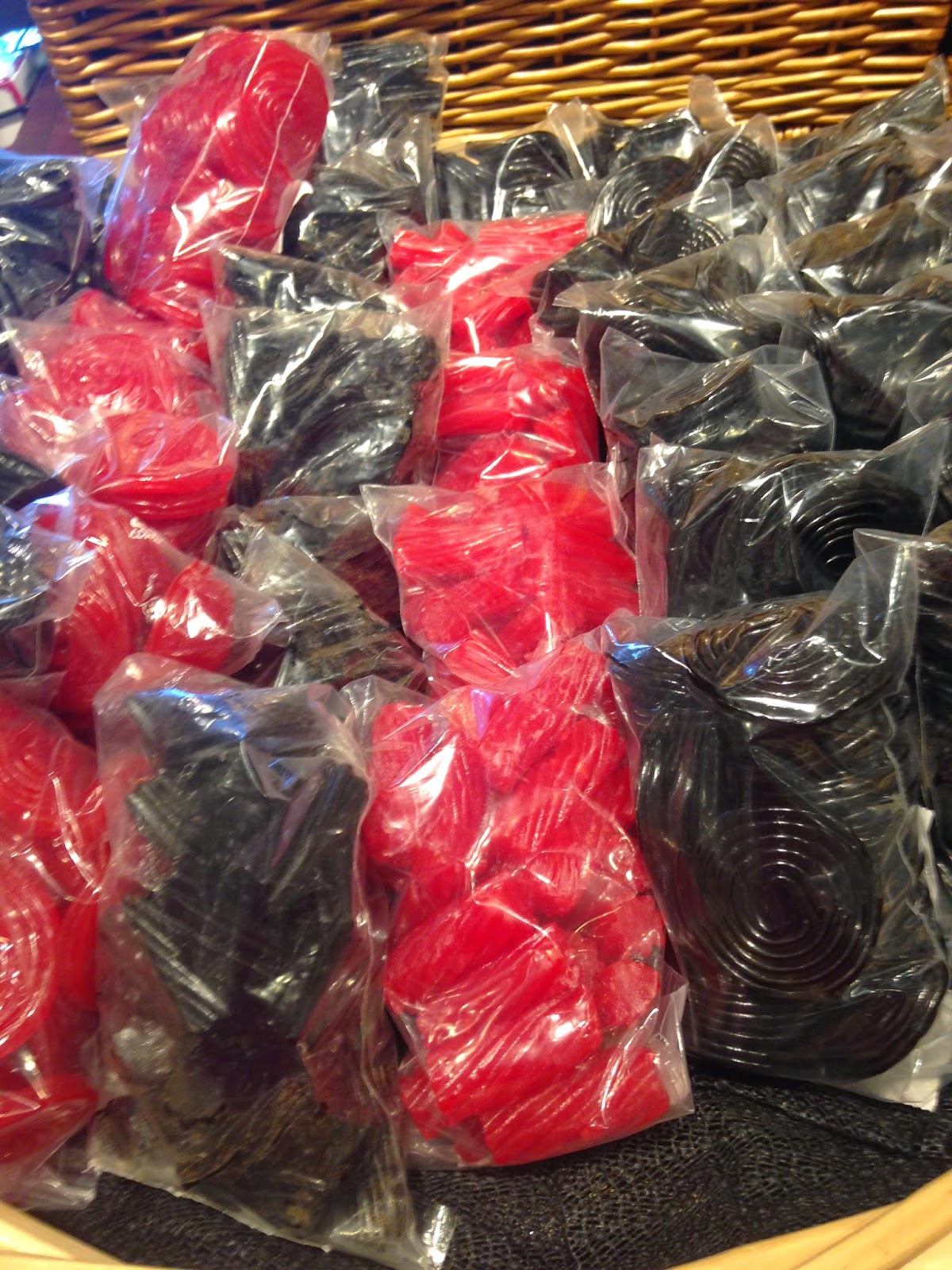 Licorice in its usual “whips” and some swirly springs. 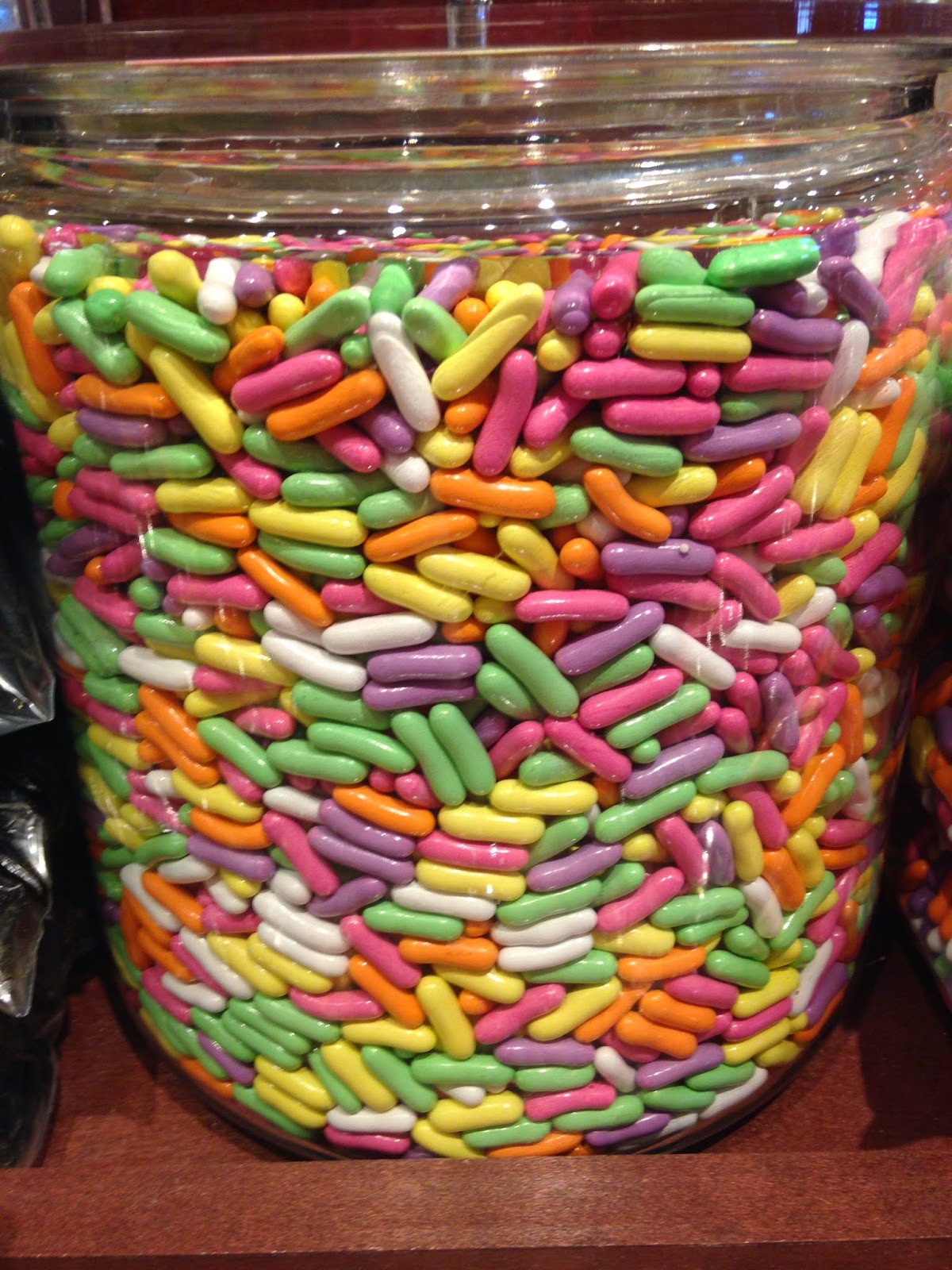 And in pale pastel pastilles. 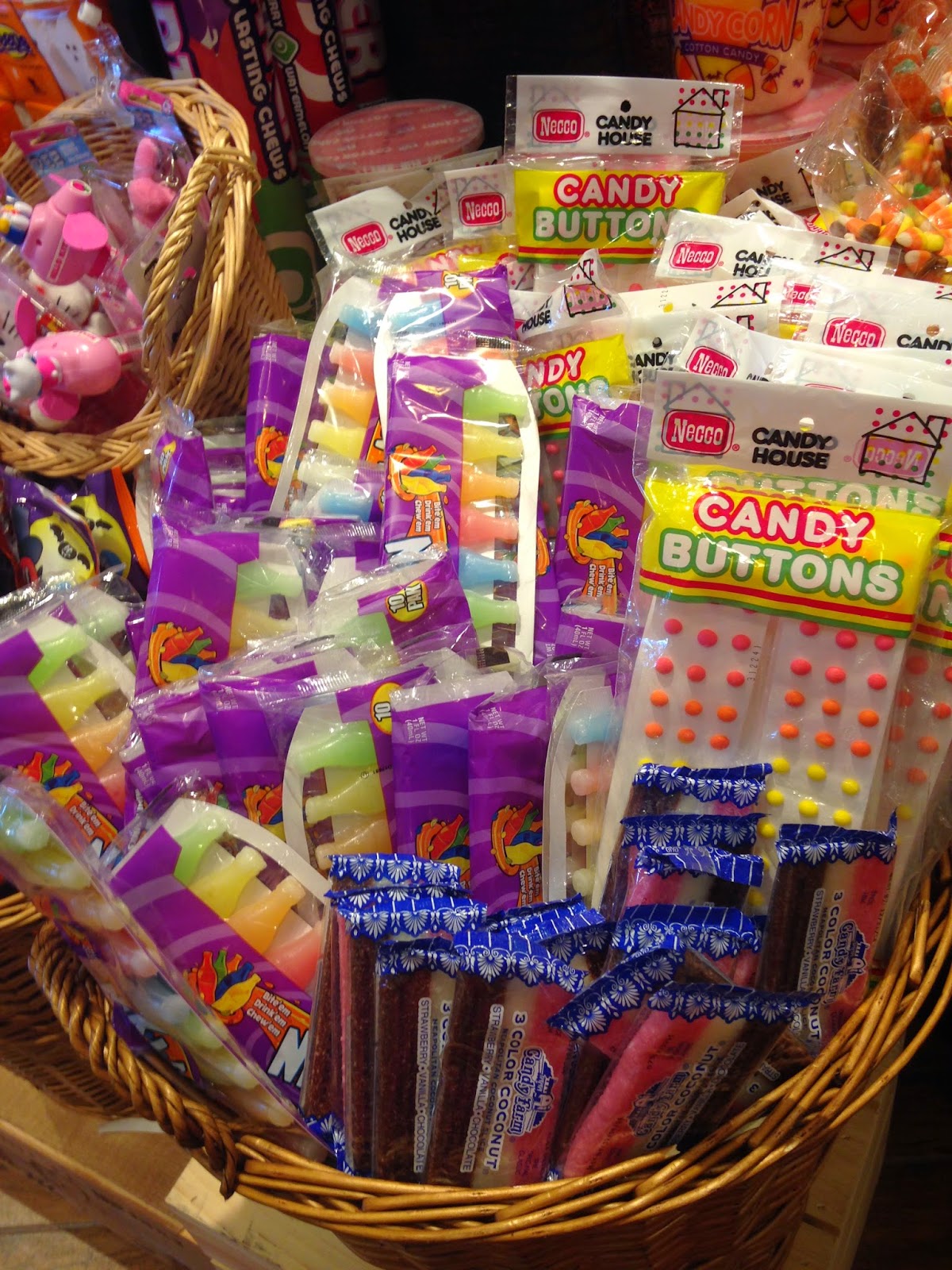 Buttons and Bottles and Stageplanks, Oh, My. 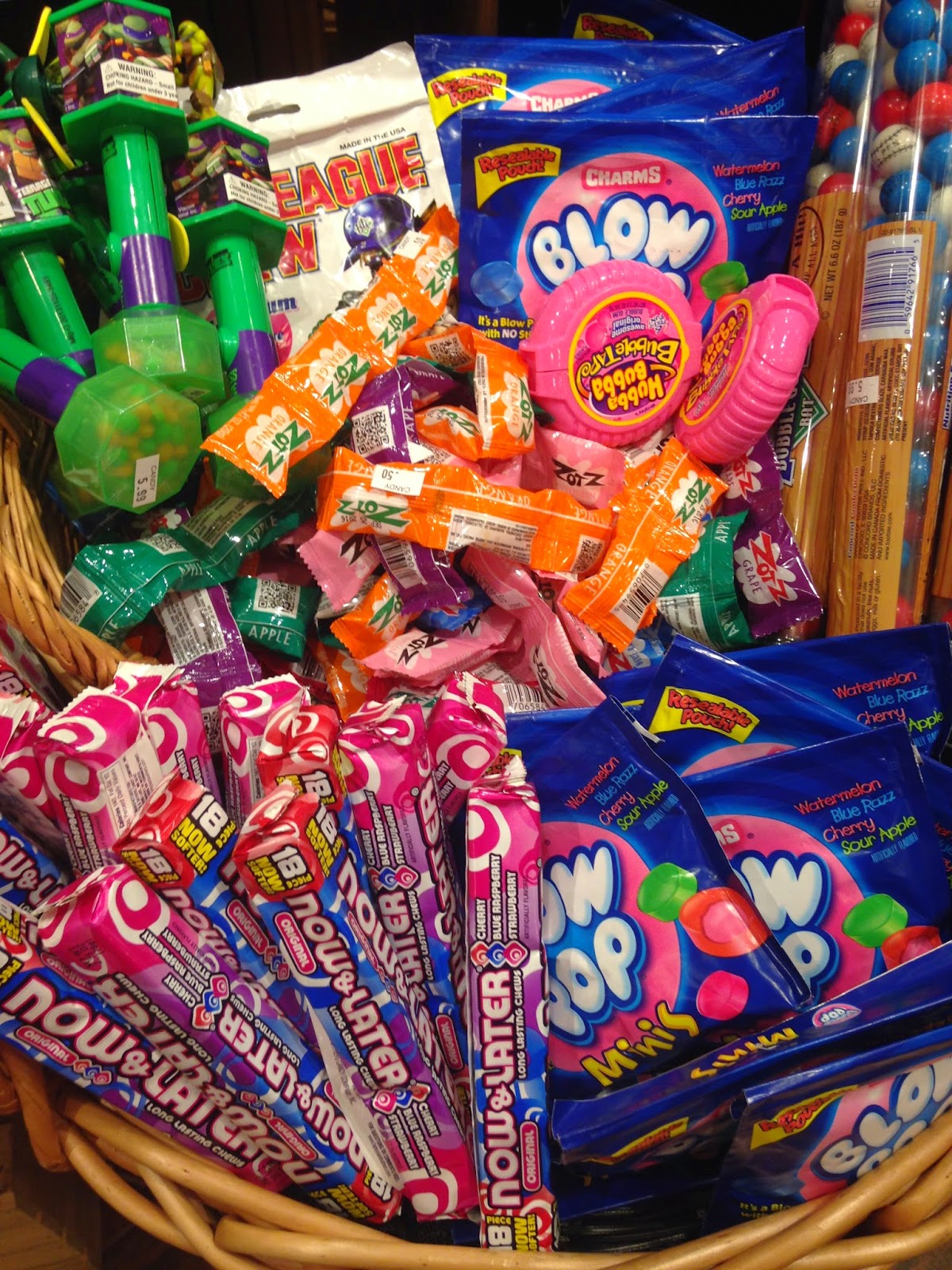 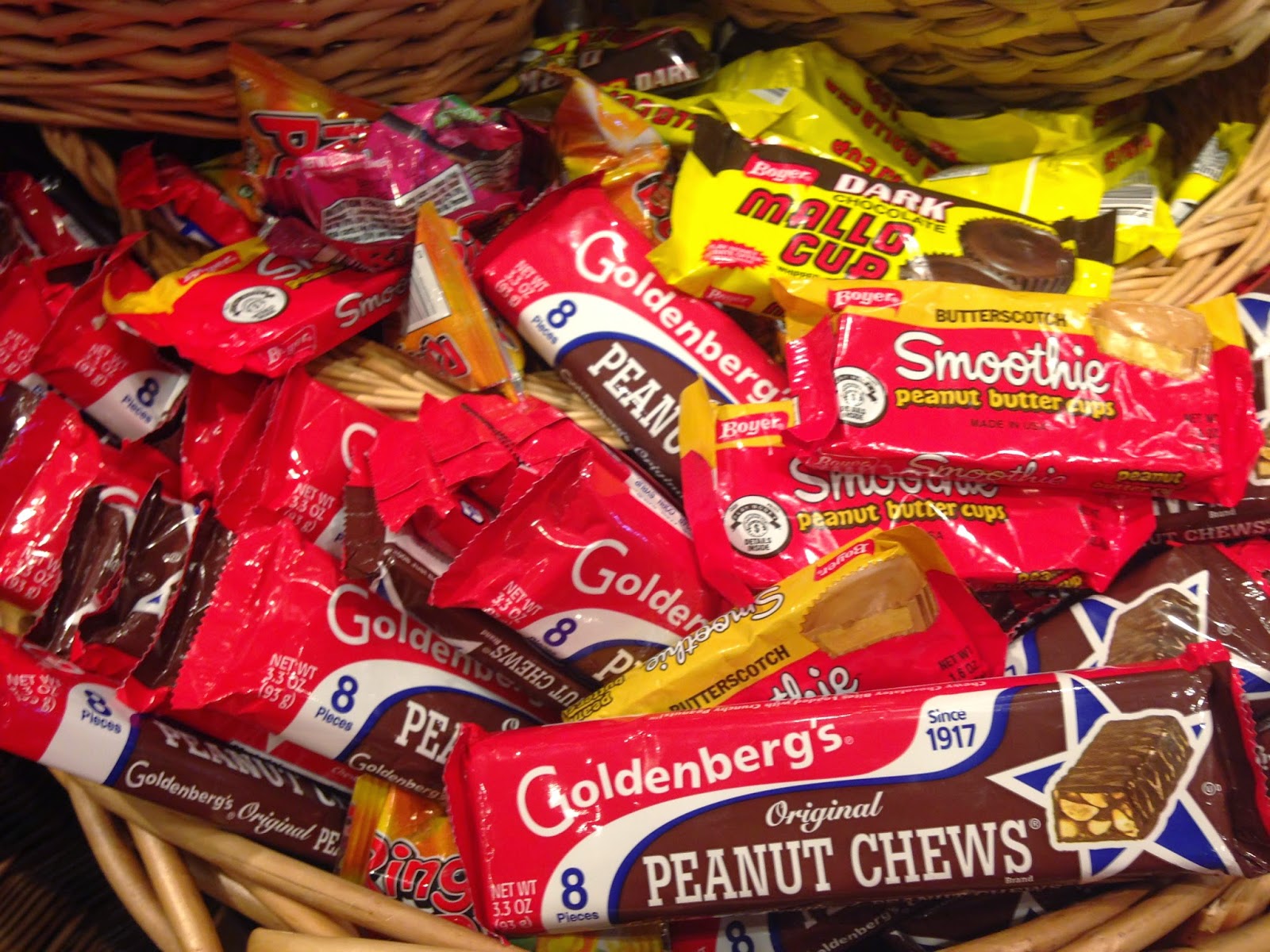 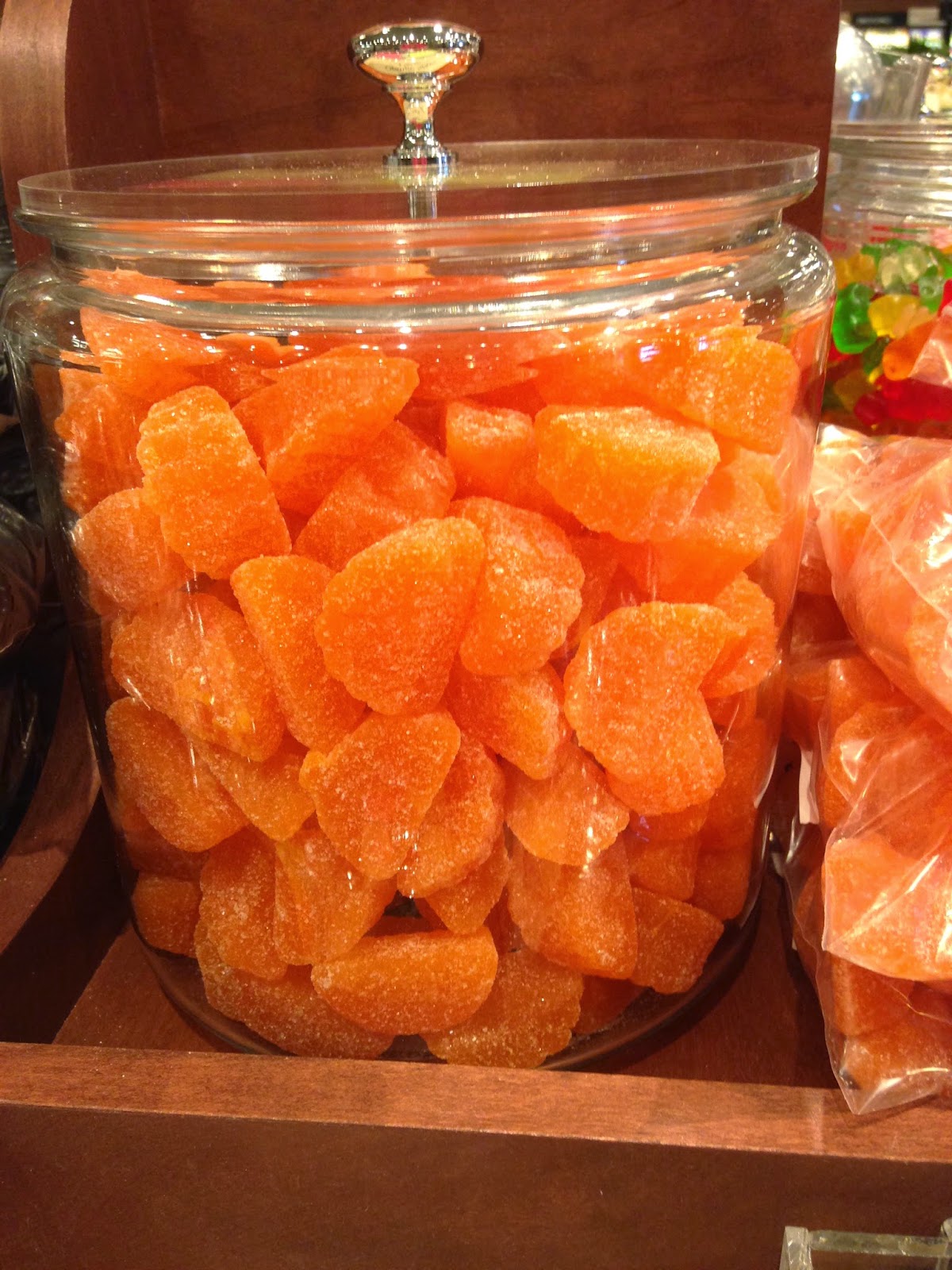 Closing with the true color of the season:  tangy-sweet Orange Slices---the crown to which all gumdrops aspire.
Any sweet memories YOU'D like to share?

OOO boy... all YOUR memories of these candies are MY memories, too. I love going into candy stores..we have a great one at the mall and Cracker Barrel has a lot of the oldies but goodies candies..
Happy Pinks

Dear one...first, thanks for coming by and commenting.
The little I Don't Do Seconds heart is to remind those that reply to my comment in THEIR comment section instead of coming by MY post and leaving their reply or comment. One must visit that same blog TWICE to even see the reply and I just don't have time to do that. One visit, one comment is all I can get done and still visit with my other bloggers. SOOO, I come once and then don't go back until a new post is up.
It's just my opinion and the way I see things. It appears rude to me. I've stopped visiting with some really great blogs for this very reason. NOW...sometimes, there's reasons that you have to answer in your own comments...no-reply comments and no blog and you HOPE they come back to see your THANK YOU FOR VISITING. They most likely don't, tho, as they too are visiting other blogs and no time to re-visit one.
Everyone to his own idea on his own blog....this is just MY ideas. :)

Oh, I loved this post! YES, I remember all of those dear sweets from childhood. Oh, how much simpler life was back then. I am always longing for that level of simplicity...before cell phones and computers and all of the modern invasions. I remember walking often to the little store at the end of our street for candy. I love pink, too, as you can tell on my blog. Oh, those pink candies look so yummy. You take wonderful pictures and have such a dear, precious gift with words. I love coming here...I always leave refreshed. Much love to you, sweet friend. :)

Oh, I loved this post! YES, I remember all of those dear sweets from childhood. Oh, how much simpler life was back then. I am always longing for that level of simplicity...before cell phones and computers and all of the modern invasions. I remember walking often to the little store at the end of our street for candy. I love pink, too, as you can tell on my blog. Oh, those pink candies look so yummy. You take wonderful pictures and have such a dear, precious gift with words. I love coming here...I always leave refreshed. Much love to you, sweet friend. :)

I think I gained weight just reading this. What great memories you brought back. Although I didn't eat all those candies, I sure knew about them. Thanks for a trip down memory lane.

Oh yes, lots of memories for lots of those candies. I especially love candied orange slices :-)

You visited my blog so naturally I had to come over to see yours and am totally captivated. Love your blog and I'll be back for sure.

I can imagine my mother as a child gazing at all these candies. She definitely has a sweet tooth. I did spot her favorite Mary Janes.

My husband would be reaching for the orange slices.

I've never had much of a sweet tooth for candy, but I would probably go for those hard round and sour candies. My favorite would be lime flavored.

Oh .. the "original" smell and taste that belongs to Bubblegum! awwwe! Childhood relived once again! Thanks for the memories! and the fillings that had to be replaced!
Pink Hugs,
Dee

Peanut logs!!!! Remember Tom’s? Sold at the counter of every café and BBQ joint in the South. And those peanut logs were BIG ones. The size of a Snickers bar. I loved those dearly. When my Granddaddy would go visit the owner of the tire retread factory to talk business (or just play poker), I’d wander out to visit with the men who would ply me with Cocolas and a peanut log from the Tom’s machine in the break room.