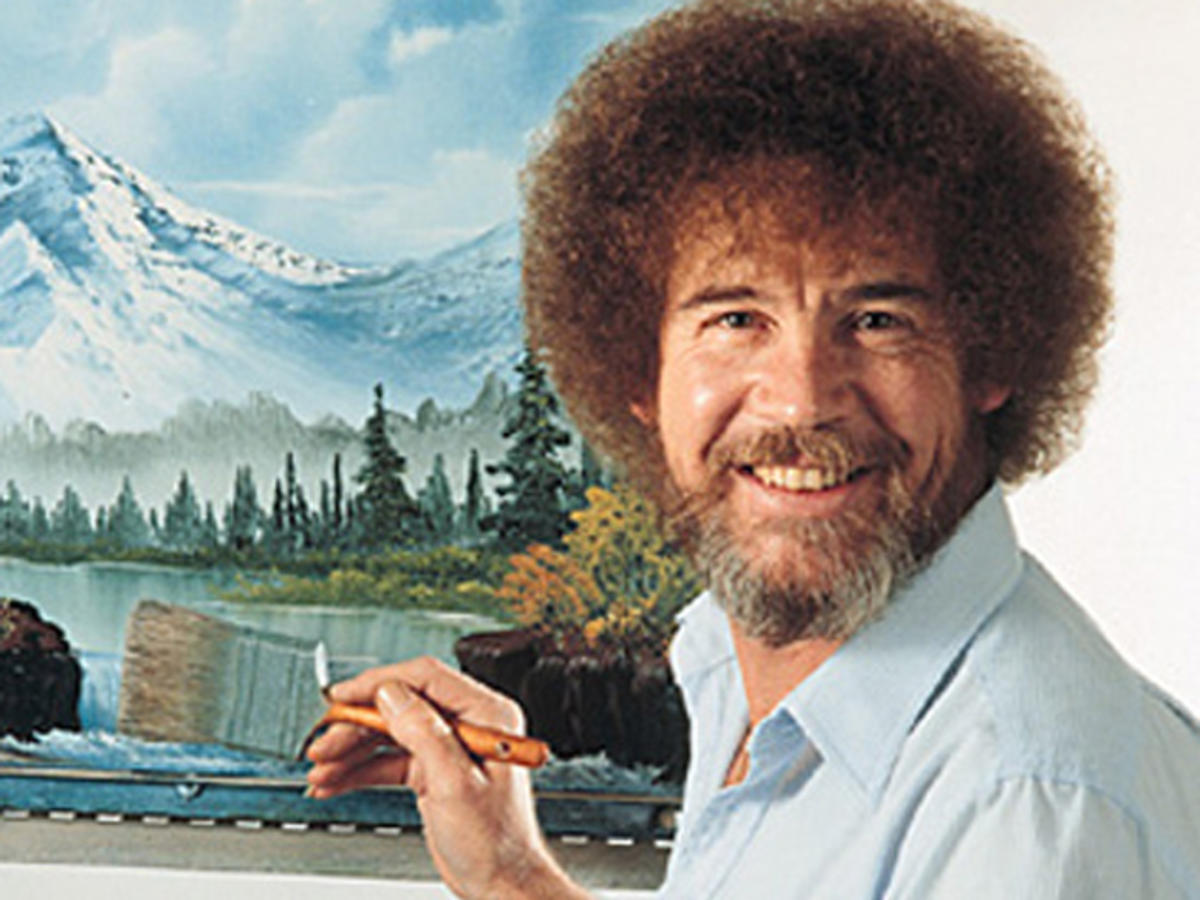 We don't have mistakes here; only happy accidents.--------Bob Ross
Who remembers Bob Ross? We used to watch without fail, marveling as that soft-spoken, kind man with the impossible haircut took big ole brushes, the kind you’d paint your bathroom with, and sorta crimp-touched them against the canvas, turning out the most lifelike trees and mountains and icy stream you could imagine.
And I think it WAS imaginary---he’d seen those trees and mountains, all right, but in his own imaginary world, everything was soft and pleasant, the colors muted and smooth, and the vistas beautiful, every one.

He stood right there on our screens, speaking casually, almost under his breath, whispering the paint onto that canvas with the ease of a child’s fingerpainting. The gentle strokes were first a pale cloud of swirls, then clouds, then great dripping brushfuls of colors, swaying sidewise, dabbing and touching, creating trees and shrubs faster than you could think, and that little knife-edged tool incised the paint to chisel the sharp faces of mountain cliffs and the edges of rocky places far, far up and away.

They were like magic, those few minutes of television---as we watched, the picture grew and formed, with things taking shape under his hands like forests emerging from blown-away fog. The very great marvel of it was the thing, I think---that slight, unprepossessing man, soft spoken and almost shy, could conjure images more quickly than a magician’s wand, with only a couple of brushes and a palette of goo.

And he told us WE COULD DO IT, as well. He had a firm belief that everyone could paint SOMETHING, given the encouragement and practice, and I’m sure uncountable artists of today owe at least a part of their training and support to watching him paint so effortlessly. His movements were as smooth and graceful, and the accomplishment as swift, as the water moving in those far-away streams.

I think we wished he’d go on forever, like Mr. Rogers, whose quiet demeanor and kindness were so like his own---he was part of our week’s routine like Church and Sunday Dinner, relied on to BE THERE and to return without fail.

Those happy little trees and that laughing little stream, those “happy accidents” that some might call mistakes---they’re all a part of our culture and our consciousness, like burgers and fries---new pencils---a bike. And it is rumored that every painting he did “on the air” was sent to a PBS station somewhere in the country, to “help them out” with their fund-raising. His estate also donated a great portion of his life’s work to other public TV stations, for carrying on their own work.

Bob Ross left us much too soon---the Summer of ’95, when he was just 52, but his legacy of sweeping vistas, beautiful landscapes, those “happy little trees” bordering gently-winding small streams going to pleasant places---those survive, along with a great audience who loved him and his work. He was a happy man---he made it so in his world, for himself and all of us who watched faithfully and still miss him.

i remember watching him...he was always very happy and very calm....in fact, i think it was he who inspired me to try to paint a few paintings with trees, waterfall, lake and etc.

His pictures were always amazing. I do remember!

Oh, Rachel ... yet another thing that makes me think we were sisters in another life ... lol
I loved Bob Ross, and sat mesmerized in front of the tv as he created his beautiful paintings. He was truly an inspiration, both as an artist and as a person.

Oh, how well do I remember! His show never came on at a certain time here, but it was always on Saturday...Time To Be Arranged. I think he touched something creative inside of me and made me think I could be an artist, too. Oh, not like him...but in my own way. His soft voice was almost hypnotic. I would watch and see it happen but then I could not tell how he did it! "Happy little trees"...loved hearing him say it...and then show it to us. He could 'plant' them anywhere!
This was before HGTV days, and was all the 'culture' to be found on TV. Well, that and Bob Villa and This Old House...which I loved as well!
Thanks for this sweet memory today!

I just loved him, he was an amazing artist as well as a man. I still watch him on PBS here in MS every Sat evening and even though I have watched them over and over till I can tell you what he is going to say next, I still love watching him do his magic.
Molly

Oh, Rachel, thanks for reminding me of all that time we spent watching Bob Ross's virtuosity on a Saturday afternoon on PBS.

Although, erm, his paintings weren't our style, we loved him and his show.

What a treat to find Bob Ross fans these many years later! There was just something about his manner and personality which bespoke a GOOD man.

And Maggie---you KNOW if you had a Bob Ross today, you'd hang it front-and-center THIS MINUTE, just for the cachet.

I remember watching Bob Ross on KET (KY Ed TV). He made painting look so easy!!

Ah, thanks for helping me to remember those magical paintings that were born each Saturday afternoon. No fanfare, they just grew up before our eyes. Nothing to compare to it today.

He did seem like the nicest man didn't he? I still watch his shows when they come on. I have been enjoying your blog all afternoon- and joined.