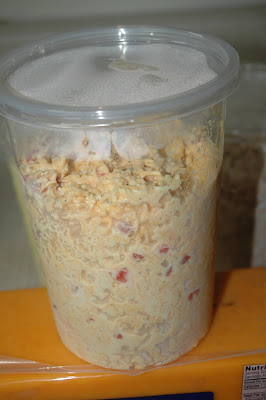 Now see---there's nothing like a big ole tub of tangy homemade Paminna Cheese in your cooler to take your mind off a dull lunch.

We traveled off and down, forgetting that forgettable food immediately through the magic of those glorious mountains, with blue sky and floaty clouds, some of which would surprise us occasionally with a sudden little sprinkle upon the windshield, but never any real rain. Beginning somewhere in Tennessee, I looked my eyes full of crape myrtles---that's how my Mammaw spelt it, and that's how it IS---my favorite Southern flower, and impossible to grow here. 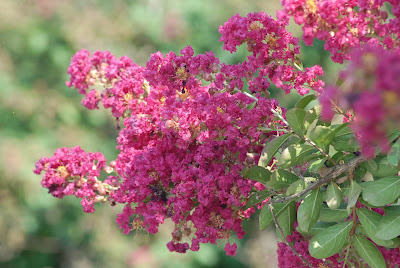 When you get on down into Alabama, they’re in the median of every highway, from palest lavender to deep rose to almost yellow. 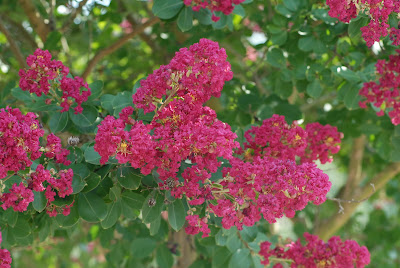 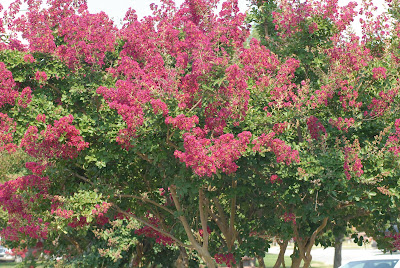 Our plans were considerably changed, between planning and departure from home and arrival there, for our GA contingent did not get to join us---Gracie had been out West with her other grandparents, and her traveling companion/chaperone had other plans for the weekend, so instead of coming back on Sunday, she arrived on Friday.

Her Mom and the two little ones had planned to be with us Thursday night til Saturday night, and just didn’t feel that she could make the drive AFTER going to the airport Friday, then having to return home Sunday in time for Gracie’s departure for Summer Camp, etc. So we mightily missed our group, having all sorts of plans and fun in the works, and no one to enjoy the games and books and tree-climbing with.

We’d loaded up all the unopened snacks and pretzels and other things which we didn’t use while they were up here, and so we just brought them back home with us. We’ll probably take them back again in Sept., when we’re scheduled to meet the group in TN.

And we had WAY too much food. I’d made DD’s favorites---Chicken salad and Asian Star Noodles and Tuna Salad with apples, and her request: Devilled eggs, but all chopped up into Egg Salad. I’d also made a quart of Paminna Cheese (MIL’s favorite, in a grilled cheese sandwich for breakfast, with peach preserves), and several of Kit’s Mac&Cheese, in order to heat up a quick lunch one day or the other. 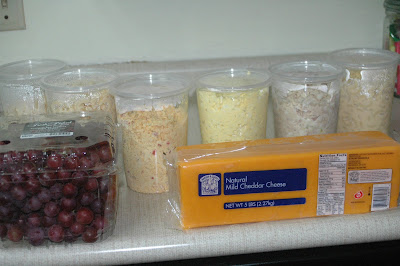 The grapes and cheese are old stand-bys from Sam's, as were the big box of croissants, the brownie bites, the lemonade pound cake, the tray of small round Cheese Danish and the flat of Otis' Banana nut and Blueberry muffins. We never know how many for any given meal, and the last time we were there, we averaged 20 per meal. And this time, I didn't cook. At least, not THERE.
Our Baby Boy and his parents were also a little off plan---they stayed for supper, but did not spend the night, for her parents came down for the week to the beach house---it was the first time that all three sets of us Grands and his GGMom met him. Quite an occasion.

DS had told us that Little One just carried on the longest conversations---cooing and talking and grinning all the time he is awake. Since he’s only ten weeks, we sort of took it as Parents’ Pride, but the moment they stepped into the house, his Daddy set down the little car-seat onto the kitchen counter, Chris stepped up and spoke to him, and that little guy started babbling and talking up a storm.

He’s a chuckler, as well, just like his Ganner---a deep little huhhuh that just takes your heart.

And his little habit of giving a little baby-snort between yelps when the bottle’s empty---we’ve all been laughing at that for days. A round, compact little boy against your shoulder, hefty and warm, tolling out his dismay with Waaaa!-snort-Waah!---that was just so endearingly, hysterically funny that we were all in tears.

And such a pleasant little fellow---he got passed into about a dozen laps, back and forth, during the course of the day, with one dear aunt who hasn’t been well for a while getting right down on his floor pallet to play with him---it was just like a magical thing, that warm circle around our family’s newest---he brightened us and he strengthened us and we were exponentially all MORE for the knowing of him. We were all enchanted.

How HE might have felt about US---well, that might remain a mystery until he can use his words. 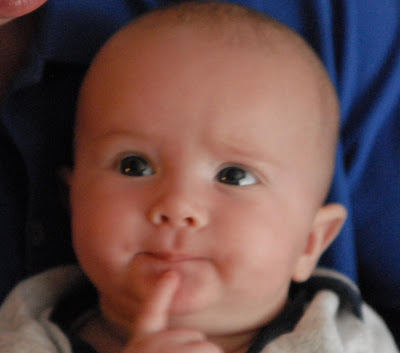 Oh, Rachel, he is just precious! How I love bald babies. I'm sorry that you all missed the GA contingent, but so glad that the little guy was there to meet you and Chris.

Oh my! What an adorable shot of a gorgeous lil' man!!

I know you could just kiss that little face all day long. Oh, he is gorgeous.

Plans. They always take on a life of their own, don't they. It sounds like you were well prepared in the food department, and I surely would have helped you work on the pimiento cheese. I love the stuff. Have you tried it on a hamburger. Yum...!!!

Those are the color of our crepe myrtles, and they are my favorite, too. But, I do love them all.

What a Sweetie -- it's all I can do to keep myself from kissing my computer screen!

That is a priceless picture! So cute! Very sorry all your plans didn't work out. I know you were disappointed. Sut sounds as if you had a great time anyway!

He is deep in thought, isn't he? He is beautiful! Do you share your pimento cheese recipe?
Sheila

That's a PEACH of a little boy!! I SO hated to have to turn him loose to go home.

Thank you all for chiming in!!

Sheila, the Paminna Cheese recipe (such as it is) was posted WAY back in the first days of this blog---it took me a long time to "get it" when it came to posting pictures.

You can find it here:
http://lawntea.blogspot.com/2008/11/paminna-cheese.html

It's tangy and not the usual mild cheese spread.

Oh, what a precious little baby boy, Rachel. He looks so wide-eyed for ten weeks. I know it was hard for you to leave him.

It's a shame about the plans you made falling through ... but, hopefully, they will work out for your September gathering. There's nothing like having your family all under one roof, is there.