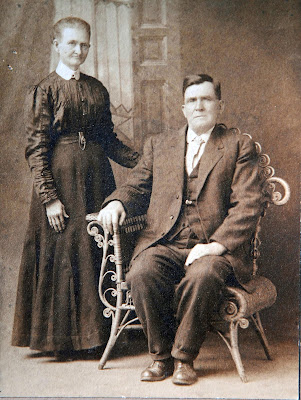 Sis will be coming to visit sometime this month, we hope, and we're looking forward to having some of our good old chats and drink-two-pots mornings where we sit there in our jammies til the clock strikes Lunch.


She's done a wonderful research into our family's genealogy, even going to Salt Lake City to that biggest-trove-of-info-in-the-country for a week and barricading herself with files and wills and pictures and transcripts and TREES. We have boxes and boxes of pictures of our own, from both sides, though not nearly as many from Daddy's side. What there are of his go back only to those more recent Kodak moments of sepia or black-and-white, with folks squinting into the sun as a long shadow reaches from camera to their feet. Most of those little rectangles have a tiny black-and-white checkery border, and lots in the boxes attest their having been ripped from their life-in-scrapbooks, for many corners still bear the tiny pointed black ears of the wee stick-on brackets which affixed many a picture to a blotter-black page.


We're into doing a lot of picture-identifying, and I wish previous generations had done so. We've been writing names on the back of all the pics we can identify. I wish also that everybody with boxes and albums and framed pictures---I'm talkin' even that great huge family portrait from 1888 that's in the flaky old frame over the mantel, and might collapse in your hands if you take it apart---I WISH you'd write the names on the back of your pictures, or at least on a piece of paper adhered to the picture. Or even stuck in an envelope WITH the picture.


We marvel at the facial expressions, the clothes, the fading draperies and tattered flowers of the stage-set of the early photos, and also think that perhaps this might be the only picture of those people that there is. In this day when our Grands have developed a permanent flinch-and-blink when Ganner approaches with the camera, and our own archives of holidays and vacations and just plain Tuesday have reached thousands in number---it's sad that our forebears in their one fading black-and-white, struck still and motionless by the gravity and the luxury of the thing, are fading as people, as well, for after our generation---who will know their names?


We delight in our own Mammaw's family---they of the ten siblings and widowed Mother, whose little family band, in those days before the TVA reached their hills and hollers, would oblige with a good old twangy gospel number or version of Redwing or Wildwood Flower for whoever called up over the party line. And in one picture, our dear, rotund, ladylike Mammaw herself---who never owned a pair of trousers in her life, is perhaps twenty---tall and slim and mysterious with her equally-dark and soignee' sister, both attired in gentlemen's pin-stripe suits and peeking seductively from beneath tilted fedoras.


And we still laugh at each other on the phone---we came across one old photo two trips ago that was an old-timey postcard, with a couple pictured on the front, as they so often had pictures made in those days (90's--10's or so) The message on the back of the couple's picture (and I grant you they WERE very stiff and formal, but I DO think the writer meant for the demise to have happened long AFTER the photo session), read: "Mrs. Cordelia Martin and Mr. Luther Martin. Mr. Luther Martin is dead."


We just hee-haw at that one, and of course, the obvious comment is "Don't he look Nachrul!" which sends us off into further unseemly brays.


Y'all! Go write some names on some PITCHERS!!! Your descendants will thank you.
Posted by racheld at Tuesday, January 04, 2011

My mother also has traced our family back to Norway...my great-great-great grandparents, I think. We have several old treasured photographs, too. Most of ours, thankfully, are identifiable. I sew, and I enjoy looking at their clothing. I have a collection of old wedding photos of relatives. I will have to post on them soon.
Sheila

Been there and done that now trying to get those ancestors in place. Got one family in a book. see post. You know this is addictive?

Ah, one never knows from whence inspiration will come, right?

I have done a lot of research on both my Mom and Dad's side. Last year I bought a little portable scanner and took it to my sis's house and scanned all of her pictures on a SD card to load to computer and fixed the pictures that needed it and put names and dates on all of them using photo shop element..
Molly

You are so right about putting names on pictures.I have a lot of really old photos that I remember my grandmother naming-of course I have forgotten-wish she had written on the back-everyone that would know these people have now passed.So sad.

Gratefully, I remember sitting with Mom a while before her death and writing names on some of the old [ictures...most made when she was a child. If we had not, we would never have known who they are! Your suggestion is right-on!

We have my maternal family history back to Wales, around 1705 and J's family history back to Westphalia (Germany) mid 19th century. These are treasures.
My children gave me a picture, over Christmas, taken at their dad's sister's home, during the early 1970's, not marked. Fortunately, the subject is living and was able to identify herself (Pat) after seeing the photo under a strong light. I try to remember to write names and dates on the backs of photos.

Oh, Y'all! I just love knowing that times and people and things are being identified and carried on for the new generations. Just the little while it takes to jot down a few names, or a date if you know it---that will multiply so greatly in the giving of that gift to family whose knowledge of those people comes only through us, or perhaps from an old family Bible with script in a spidery hand.

Thank you ALL for your own memories, and I hope you all the benefit and reward of sitting with your own new generations, showing them their people, and the lives lived long ago, to put them here today.

Pat---Welcome, and I'm so glad you chimed in!! I drop in on you often, and am so pleased that you made a visit here.

I do have to urge folks to get the relatives to identify photos while the wits are still present. When my parents moved out of their house, they mostly remembered, but not always, and nowadays my mother does not remember her grandchildren's names much of the time, not to mention calling me either by her sisters' names or my sister's! She does still know who I am, and wants me to come home SOON from our winter abode.

I share your frustration at old photos that aren’t labeled. It was when I started trying to ID pictures that I’d gotten from family members that I began to make the effort to write at least a name and date on the backs of mine. Sometimes it’s a major pain when there are a lot of pictures or I’ve waited a while to organize them (that’s when I start grumbling – “If I can make the effort with eleventy-billion pictures, why couldn’t they do it with maybe 50 pictures taken in their entire lifetime). You’ve reminded me to go around to all the framed pictures and make sure that they are ID’d as well as possible.

Have a wonderful visit with Miss Sis!

Rachel, I love you and I love this post. I am a "certified write the name on the back of that photo" officer. We did this project about 18 years ago, and I am continually quite diligent.

I use a genealogy software program, and I try to remember to post all entrances (births), exits (divorces and deaths) and edits (you can only imagine) as updates.