I’m preparing a few things for tomorrow, but the having of things in order and the easy righting of the rooms, unaccustomed in this slapdash house of ins and outs and dropping in and a little one whose “Mine” consists of every item she’s touched or seen, and which end up in toybox, shelves, or beneath whatever chair or tent or handy table she’s playing in---the quiet order today, with the gentle sound of DS in the shower, and the chirps of Sweetpea's tiny sweet TV friends on one of their innocent adventures---those lull me softly into a slow-doing today.

And I think of all the women before me, the Grands and the Mothers and the Aunts---those preparers of great and glorious meals, or simply a huge pot of whatever simple fare was available---stretching a scrawny chicken and a tub of flour into a savory big bowl of dumplin’s for twelve---or more, if kinfolk followed them home from church.


Many a great-great Grand cooked every meal like this: 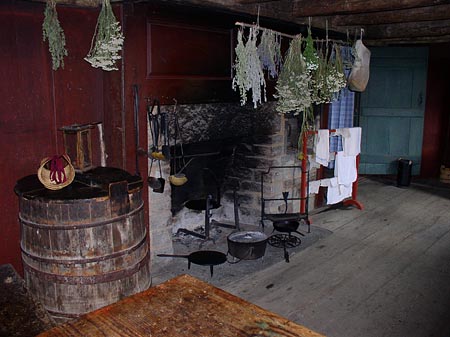 The hot, crowded kitchens and the scurry of the days leading up to Thanksgiving were sometimes a drudgery, I know, for the getting-together of all the usual dishes and getting them on the table at the right time, hot and fragrant, is a chore in its own right, aside from the seatings and the chairs and the kids-eat-last theories of the times, with the men, even up into my own generation, rightly at ease as the women tended to things, would sit in the parlor or stand around in the shade, easily awaiting the summons to come and sit.

I always think of the senior Mrs. Wilder, MIL of dear Laura, when I see an old wood-burner like this, but considering all those acres of flapjacks and that yard-square pan of chicken pot pie every Sunday, I think hers must not have been so slender and dainty a model: 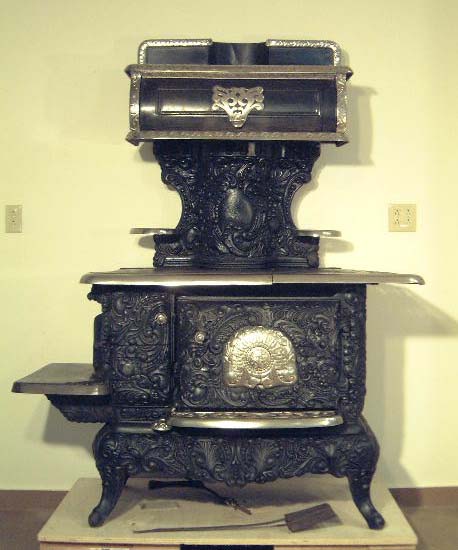 The men would saunter in, or hustle along, depending on their appetites, with a quick pass by the bucket and pan and soap and rag on the back porch, taking First Table as their right as Providers. The Preparers served, poured tea, re-filled bowls and the biscuit plate, and waited tables. And waited, til the males had had their fill of the dinner, with a linger over pie, and long conversations regarding weather and politics and the latest crop news. I always wondered if some of them, accustomed to kinder, more considerate ways toward their own wives, felt constrained to dash through the meal, in deference to those waiting, or perhaps to forbear from that second helping, for the courtesy of leaving plenty for the ones who’d spent days in gardening and canning and cooking and preparing this feast, from seed to table. I've had one of these little white beauties in the potting shed for three years now, awaiting the putting-back-together and the place to put it. I'm sure it was a marvel of convenience and speed in its day.

But this getting ready, this is a today I’ll prep the vegetables, make the mac-and-cheese for carrying with us on Friday, boil the eggs, chop the onion and celery for tomorrow’s dressing day. I’ll step out to the garden for a little curl of sage, breathing a last breath before the thirties temps of today blast the last herbs into limp withdrawal til Spring. Those seem a breeze, somehow, when compared to the day-befores of even my own past, when helping with a big family dinner, or preparing in my own home were hot and endless, with the air conditioner blasting at end of November, so we could stand the oven’s heat long enough to bake the turkey.

I’m thinking of preparations today, and the line of women who made them. My Mother, with the same traditions and recipes---her pecan pie just came out of Caro’s oven upstairs. She took the recipe, written on a folded sheet of paper in Mother’s unmistakable hand, and copied it onto a notepad, for we’ve never taken that recipe into the kitchen. It lives in a big book downstairs, and comes out for the holidays.

Mammaw, whose kitchen and quick hands could turn out twelve-dishes-for-a-crowd with effortless ease, getting out the pickle dishes and the starched damask cloth and a quart of her own home-canned sweet pickled peaches, each globe slick and perfect, shining golden in the rows of jars in the fruithouse.

My first Mother-in-Law, whose preparations on the day began in the wee early hours, for most of the menfolk of the family scarcely stopped to honor the day, in their haste to get to Deer Camp as soon as soon. Many a time, I’ve helped her put the dinner on the table before eleven a.m., as the cloud of camo surged into the kitchen, all elbows and loud voices, finger-grabbing devilled eggs as the egg plate was routed toward the table, only to arrive almost empty, and attacking the dozens of just-from-the-oven rolls before they could be removed from the pans, gobbling down the perfect, yeasty bubbles with big grins on butter-smeared lips.

They ate quickly and appreciatively, and cleared out as fast as they came, with a whoop and a holler as two of the pies, a ham, and big boxes of cake and cookies went into the truck with the guns and ammo, leaving us breathless from the headlong dash through the cooking and serving. We were left only with the sudden quiet chaos after the thunder of the departure, with a lingering haze of preposterone still clouding the air.
I can smell the vanilla and cinnamon and clove in those kitchens, the chicken-broth heat, the perfume of the onion and sage, and the toasty ‘nilla-sugar as the marshmallows on the sweet potatoes puff and brown.

This is my own dear old black Franklin, which fed thousands of elementary-schoolers before she was retired, and then found a whole new career in my downstairs kitchen---the big old silvery thing is a door from an even older stove, gaudy with a bodice-ripper of a pastoral scene, and that is a pan of 1-2-3 Sausage Balls, ready for the oven: 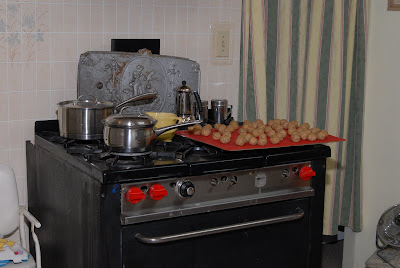 And with each and every one of the cooking methods, these have been right at home for centuries: 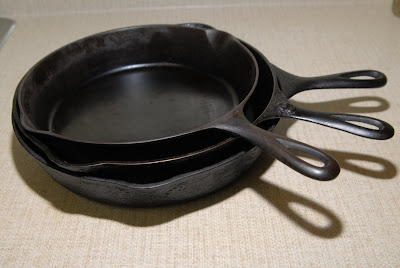 Old ways or new---Happy Thanksgiving to you ALL!

Days Gone By are Treasured Memories!

What a beautiful and touching post, Rachel. Your words conjured up every one of those scenes from Thanksgivings Past, right up to today's festivities at your house. Your Franklin is, indeed, a treasure and I can just imagine the glorious meals you have prepared on it in those timeless cast iron skillets.

Today is a preparation day for us, too, as my parents join my husband and I to cook for tomorrow's celebration with our daughter, son-in-law, and AVERY GRACE.

With my heartfelt wishes to you and your loved ones for safe journeys and lots of sweet memories-in-the-making.

One of the many things I am thankful for this day is that there are folks like you to focus the color and dimension and love and truth of this world.

I hope the day is both enjoyable and rich for you and yours.

I want to join Mike in saying that YOU, my dear are high on my gratitude list this and every year since we found each other! And that ‘preposterone’ made me shout with laughter!

Oh my, what memories this post brought back..days of when I was a young Bride and mother, of going to my MIL & FIL's and the other 2 SILs and kids being there watching the Thanksgiving Day parades, the kitchen smelling like heaven with baked ham, turkey & dressing, sweet tator pies, pecan pies, and all the trimming, the men getting ready to go hunting after dinner and the women and kids headed to Gibson's to watch Santa arrive and the yearly chore of pictures with Santa was preformed.
I hope you have a wonderful Thanksgiving with your Family...I now and the MIL and all the kids are coming to my house.
Molly

Oh, along with Kim the "preposterone" hit me between the eyes!

Wonderful as only you can do it, my Rachel!