The morning sunlight still falls softly amongst the fading hostas in the back garden, for though they are drooping and yellowing more each day, and the leaves from the arbor roof have covered the ground, there is still enough green clinging up there to shade most of the area. 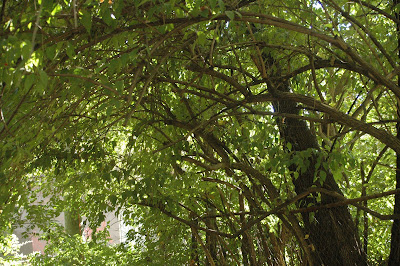 I love to stroll through the crisping leaves, feeling and hearing them beneath my feet; I still do the little feet-dragging steps of my childhood, shusssshhhing the leaves forward with my bright clogs as I mimic those long-ago walks when the NOW was all and the future just out there somewhere.

The far-back corner of the garden is a bit bedraggled of its lush Summer glory; the garden-of-stones mossy-green and graying as the cold comes on. 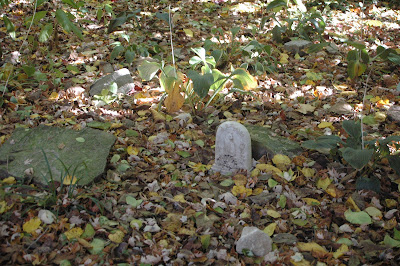 We collected these massive stones as we drove home from Alabama after Chris’ Dad’s funeral three years ago; we stopped in Alabama, Tennessee, Kentucky, and then in Indiana, daring to stop on the side of I-65 as the mad rush of traffic threatened to sweep us away.

We’d get out, him on the Danger-side and me on the safe, as is always our travel and our life---he’s the protector and the comforter, a role he was born for, and even semis and the daredevils of the highway do not sway him from his place in things. He’d run over to the fallen pile of rocks, choose one WAY too big, and heft it into his arms, walking back to the car as I opened the back door. Just before he sank into that little spraddle of a child lugging a too-heavy-toy, he’d heave the big rock in onto the squares of carpet samples we always carry for setting things on---even ourselves, on occasion, if we stop for a bit to take in the view.
Even at the winding-down of such a solemn occasion, we still had silly moments of recalling Lucy's episode with all the huge rocks in their honeymoon trailer, and we even sang a few lines of "I'm just breezin' along with the breeeeeze . . ."
And so we arrived home with a boulder from each state, though boulder to me connotes a great round thing, which perhaps has rolled down from mountains, smoothing its edges and picking up speed. A boulder just SITS there, once it’s where it’s going, hulking over whatever landscape it’s fallen amongst. A boulder seems one to choose its own path. These rocks, though, are great sharp things---faceted and sheared into jags and edges by the blast of the explosives which took down such great sections of hills and mountains along the highway’s chosen trajectory through that expanse of eons. They’re bits of history all on their own, risen by the heavings of the earth, dropped by erosion and time and man’s hand on the plunger.
They’ve grown their own hazy green verdigris over these small years, shaded and damp beneath all that overhang of shade, camouflaged as fawns in the brush, blending with the cool of the million shades of green. 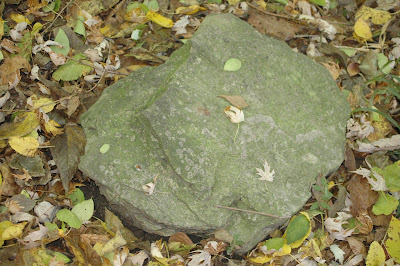 They are Granddaddy’s little memorial garden, also Kitty’s resting place, and near to the burial site of our two ferrets, our cheery little longtime pets and companions. 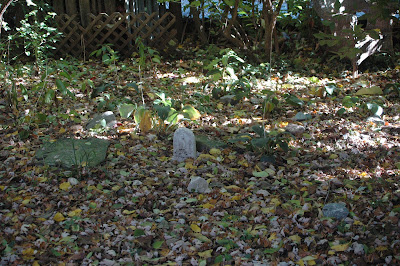 The dear old rescued Gate-to-Anywhere stands ready to take you away, and a quick brush across the chair sends the cushion of leaves flying, so you can sit for a moment of quiet contemplation. 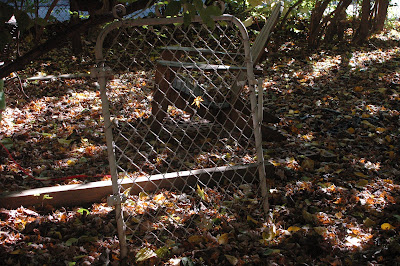 The closing down reaches out to the old rattan chair, long-used and then placed here just for the look of its gentle decline in the goldy shade. See, just beyond on the right, the little curve against the fence and the one smooth horizontal rod? It is the remains of a tiny blue wicker vanity chair, with a heart-shaped back and elaborate scrollwork---in all the time we had it, I would think of a Victorian lady, swishing her skirts to the side as she sat to put up her hair; the dainty chair has fallen to time, and is melting into the ground, lying like twigs amongst the grass after its several seasons of gracing the fenceline. 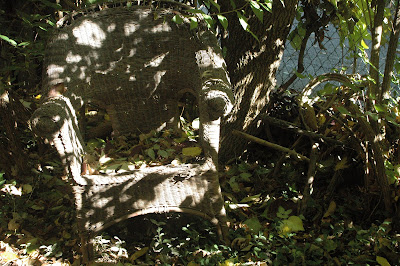 The birdie-chair’s pot-bottom fills with leaves, and I suppose they take their sips between, for I don’t think this cool weather would entice them to their baths right now. 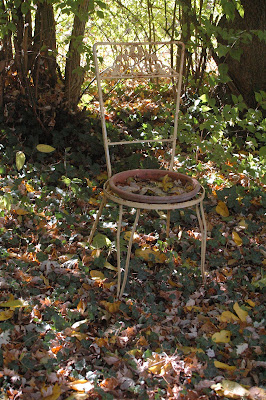 It’s a restful place, back there, no matter the season. The wind chimes sing at the slightest breeze in the leaves, the shade is lit with little rays of sunlight in an ever-changing kaleidoscope along the ground, and I find even the compost corner beautiful. 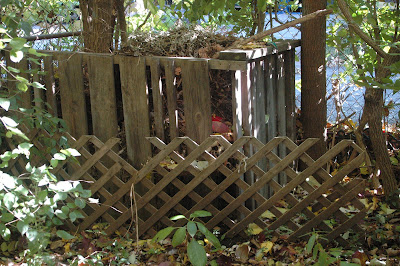 I feel like I've just been on a stroll with you - thank you for that.

I love the story of you and Chris gathering boulders to enjoy in your backyard. I can just see the two of you, side by side. How much fun you must have on your road trips!

What a genuis idea to keep carpet squares while traveling. You never know where you may want to picnic, or, as you said, need some leverage while moving heavy things.

The carpet squares idea IS genius! I'm gonna steal that. And thank you for the fall stroll. Wish I could join you.

I also love bringing a rock home with me when I travel. Enjoyed the stroll.

Hi Rachel, I too am always spotting a rock on the side of the road and Bill stops and lugs it to the car. I love them in our gardens or as edging. I found a large rock on the side of our property and wanted Bill to put it in my flower bed. He said it was too heavy. I moved that rock end over end and slowly put it where I wanted. Bill was stunned. Never underestimate the power of a woman when she wants something. HA!

Fall is leaving us bare and brown more each day. Our pup is fascinated with the deep fall leaves. I love the rustle of the leaves when we walk through them too. I am kind of worried about a puppy pile under all those leaves. I tread lightly as you might expect. Smile.

What a beautiful and magical place, your "back garden" is, Rachel. I can imagine little fairy faces peering around the rocks and stones, and scampering in front of you as you kick the leaves and watch them settle. I love the "birdie chair" and the "gate to nowhere" and the little stone memorials to your beloved pets. Thank you for sharing your walk and this lovely little sanctuary with us.

Thank you ALL, and I wish you'd been here for such a lovely Fall day---yesterday and today were just gorgeous, and the sunshine got up in the 70's both days.

Carpet squares seem to be quite a hit---we've always had some of the sample size maybe 12"x18", for all sorts of padding and keeping tabletops from scratches---Chris carries them into the places where he works, so he can set machines on them.

And I've got about NINE CASES still out on the patio---I've been longing to carpet this downstairs area again, and he found a good bargain in a blue that I'm not enamored of.

Perhaps a couple per household to all my friends, online and off?

And Janie---it's the Gate to ANYWHERE---wherever you want to go. It's not very big back there, but it has endless possibilities and endless treasures.

A quick good morning to a dear blogging friend. I read your post again and enjoyed it all over again.
Now you know I must have all the time in the world visiting you twice. NOT SO. I am enjoying some extra free moments on my computer. I wanted to make sure you see my post this day. It is very short but I love what I have to share.
Warm hugs, now have your coffee and come over. I'm having mine that my hubs made for me. Mmmmmm. Smile,
Jeanne

You have such a way with words- almost like music. I could just sit and read all day.