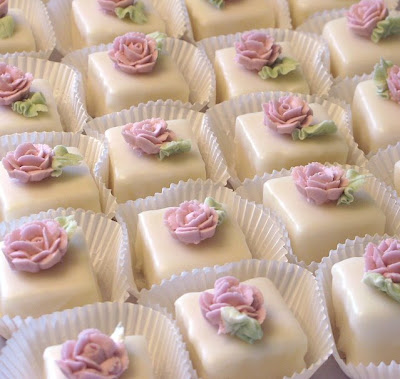 The anticipation as the tiny smitch of Scotch tape was slit from its small closing, the crackle of the fluted paper as the lid was lifted from the bakery box, unmistakable waft of the vanilla-something scent of faintly-cooked sugar fondant---that’s an unforgettable little ritual, bespeaking a really fancy occasion. I can almost feel the crackly folds of a scratchy party-dress---the only proper attire to befit such a regal dessert.

The bakery in the big-town-two-over was a wonderland of lovely scents and fairy-colors---the windowfull of wedding cakes with their swoops of pink swaggings and the perfectly-formed pale roses grew stiff and forlorn in that Delta sun, but the allure and the awe never ceased. And to call and order up “Three dozen individual iced cakes,”---well, that was the rallying-cry for nothing less than the very best tablecloth, the never-used smallest forks from the silverware chest, and the borrow of Aunt Ninna's four-piece epergne.

Just calling in the order was a thrill---I remember my First Time, giving the directions to the clerk for several dozen, the exact pink of the rosebuds atop, and a pickup-time down to the quarter-hour. I could just smell them over the phone.

Other shopping was got out of the way early, and the import of pulling into that parking spot in front of Stowe’s was akin to arriving on the red carpet. The width of the box itself was impressive, with just a little sag to the center from the weight of cake and fondant. Three books-brought-from-home aligned in the far-back dip of the backseat to balance the contents, and super-careful driving so as to need no quick braking, we made our way home. A birthday cake from there was a must, but these little jewelbox creations---they were the next-best-fairythings to those immense sugar Easter eggs with the peekhole to tiny tableaux which I coveted with every longing of a girly-girl’s heart.

The party itself---a shower, an afternoon tea, a visit from the Exalted Grand Matron to the far-flung flock---that was an Occasion. The silver-polishing, the punchcup-borrowing, the napkin-pressing---having been delegated those make-work tasks for several years, I think I could have taken a post at Windsor when I was twelve.

It was a special time that no other kind of gathering promised---you wore those nylon stiffnesses, those white gloves, the one-pink-flower straw hat, and it was lovely.

Chicken salad was de rigueur, either in tiny crustless sandwiches or puff shells. A silver chafing dish of Chicken a la King with a silver basket of teensy thumb-pressed piecrust patty-shells alongside, some daintily-cut cucumber somethings with the bread pillow-stitched around the outsides, some toasted pecans, a slender silver compote of Richardson’s Butter Mints for most occasions, or made-to-match from the bakery for REALLY SPECIAL, and one of the favored punches of the day in the big frosty bowl—those were expected and arranged with the pomp and solemnity of setting out the Lord’s Supper set on Fourth Sunday morning.

The silver cakestand or wide repousse' tray, doilied within an inch of its life, with the small rustly-papered dainty cakes set just so in precise ranks, as the newspaper reported time and time again, “completed the table appointments.”I don’t know precisely what the allure of those things was---the small size, the how-did-they-do-that smooth shining fondant, the coveted pink frosting rosebud that tasted better than any candy in the Kingdom, the melty flavor of a vanilla fondant and tender white cake contrasted to the hearty yellow layers and homemade frostings of our own kitchen---there was just something about the magic of those small decorated rectangles that no macaron from Laduree’ nor even standing in the storybook realms of Pierre Herme’ could outshine in enchantment.

I didn't want to eat 'em. I didn't want anybody to eat 'em. It was enough that they just BE. They went beyond the ideal of cake and into sweet jewelry. I just wanted them to languish there in that box, available for an open-and-sigh, and didn't care that they would shrink into tiny patterns of themselves, like yellowed old ivory dominoes. They could have stayed forever, like Miss Havisham's wedding cake.

And it was years before they began to be called petits fours, and hostesses were quick to mention the appearance of Peddy-Fours on their party table. Even the French appellation, re-constructed into local dialect, did not do them justice. The sheer rarity of such august occasions as to warrant such frivolous fare, when you could make up a whole batch of cupcakes yourself---the luxury of the thing was a great part of the charm.

Those small bits of cake and frosting were so special that they defined the import of an occasion, like Black Tie on an invitation conjures élan. And they still do, in my memory. Right now, just thinking of them, or seeing a tray in a picture---I can smell that enticing scent and feel that scratchy dress.
Posted by racheld at Saturday, June 13, 2009

While I never attended such a "fancy shindig" in my youth, I now feel as though I have!! I can almost taste those "Peddy-Fours!" Your posts are simply wonderful and beautifully written!
Thank you for your recent visit and comment to my blog - what an honor!

Oh dear...I may be late with the cake recipe you asked for...and there was no email address to send it to...but..the name of the cake you asked me about is Tres' Leches Cake...and I googled it for you as that is where she got hers.
I can't find a place to send it so just Google that name and it will come up...if not..send me your email and I will send it to you..

There is something about a petit four. I loved those at Delta Cream.