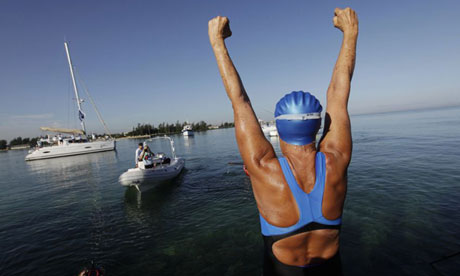 Isn’t it a strange, thinking of all the things going on in the world while you just go through your day?    While my family and guests were having burgers and a fun evening  just now, Diana Nyad went into the water in at 7:45 p..m.   She first put on her cap, flexed her arms behind her, played a jaunty reveille on her bugle, and jumped in.

This was no graceful lady-dive to impress the onlookers and show the import of the moment---it was a body-hurling, take-the-plunge, kid-at-the-pool JUMP, her joy embracing the quest, the ocean, and the sheer abundance of her energy and preparation.

She’s been planning this swim for a long time, for she made a valiant attempt thirty years ago, and has been training rigorously for the past two years.

Of course, she has watchers and a big support team, escort boats, a doctor to monitor her condition, and a group of shark experts manning electronic shark-repellent shields beneath her in the water.   But all this is necessary gift wrap---it’s STILL her grit and determination and all those miles and miles of swimming every day for the past two years.   It’s HER bravery and fatigue and pain swimming stroke after stroke, while we sleep, go to work, water the plants, complain about the heat.

She'll be surrounded by her team, but think of the seclusion, as she lives through salty breaths, fogged goggles, covered ears, like forever riding some exhausting, unimaginably dangerous wet hamster wheel.   That constant wild rush of the water and the burning muscles and the reaching, reaching, for just that one next stroke will be her every moment while we go through tonight, tomorrow, Tuesday, and on into Wednesday morning.   Incomprehensible.    Sixty plus hours---approximately one for every year of her age.

From the AP article by Peter Orsi, a few minutes ago:

One theory about Nyad's drive to make this swim is that she's avenging a failed attempt at this trip more than 30 years ago. And though Nyad admits there is some bit of athletic ego involved, she says it's more about proving to herself and to the world that 60 is not old.

"When I walk up on those shores of , I want to prove to the AARP crowd that it's not too late to go back and write that book or adopt that child," she said.

Brava and Godspeed, brave Diana---we’ll be proudly cheering you on all the way, and just bustin’ our buttons on Wednesday when you step up onto the sand.

Addendum on Tuesday:  After 29 hours in the water, an asthma attack and severe pain has caused Diana Nyad to have to end her swim this time.

Courageous attempt, valiant effort, strength and endurance beyond fathom.   Brava on this brave, heroic endeavor; this isn't the last we'll hear of you.
Posted by racheld at Sunday, August 07, 2011

Ok..I will start again. I misspelled a word.
What I wrote was:
Wow! You are right! So much is happening out there while we go about our daily routines. I think I will forgo complaining about the heat today, especially since I am fortunate enough to have wonderful AC going at all times.
To know someone is out there living their dream at this very moment is ...nice. Really a nice way to start the day.
Hugs to you Rachel! A couple of them.
Mona

This is just amazing! I think we should all dream, and not just dream, but work to make our futures the way we'd like for them to be. Of course, I must add that I don't want just what I want; I want to do God's will in my life.
blessings, Beth