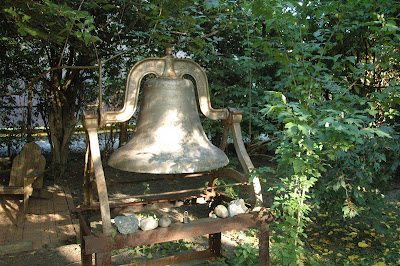 Our bell with the ready assortment of striking-rocks, to provide different tones and to fit small hands. The lock is the exclusive property of the littlest Grand, who is the most constant in her musical practice---she alone has been responsible for hundreds of pecks and pocks in the already-odd paint job, and enjoys all the tunes we can play---lots of times in harmony, depending on the two chosen strikers. 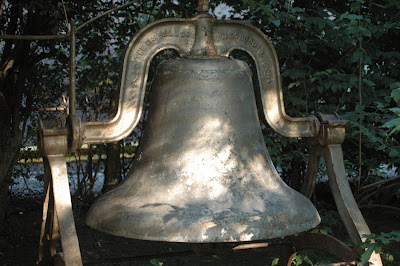 This old bell stood on my parents’ lawn since I-can’t-remember-when. Daddy acquired it and its twin somewhere years apart, ensconcing them on the back lawn with dainty skirts of bright red salvia and frills of coleus and ivy at their feet. I'll treasure the memory of the cheerful clamor as Chris' three little boys swung on the levers, ringing out a joyful noise at the end of our wedding vows on the lawn.

The two bells were the last things onto the trucks when Daddy sold our family home years ago---the furniture and other belongings, now divided amongst three households like slicing a pie, with this to us and that to Sis and that going to Daddy’s new apartment, with the separate ways of the line of travel as those trucks left the driveway marking our distances in miles.

We had six sturdy men in our own group, that day of divide-and-depart, and Good Ole Boy friends from all around gathered as well, to lend their muscles and see us on our way. Big brackets of 2x4’s were nailed into the floors of the trucks, the bells wrestled by sweat and loader and groan into the slots, and a further prison nailed solidly in, to assure that there would be no shifting in the travel. The other went home to Texas with Sis, whose back lawn is graced by its sturdy presence and resounding voice.

And we three, when we got our hefty girl home all those hundreds of miles---all 1300 pounds of her---were lucky to have such a good friend in the local State Patrol. Chris had done lots of tech support for his home computers, and he offered to call in a favor from one of the tow-truck companies he knew. So up the drive came our truck, between shrubbery and eaves and fence, squeezing in like toothpaste, backing up to the floor of flat pavers we’d laid in anticipation of the need.

The tow truck followed in his wake, threading that obstacle needle with remarkable skill, easing past lawn and the ugly above-ground pool---an unsightly blue tuna-can which was not long for the keeping. A big sling and the winch and some accompanying noise of gears, with the shouts of all the male participants and onlookers. Through the air she was lifted, to settle into her permanent home---out amongst the Rose of Sharon and the brushy bones of the not-yet back arbor.

She’s a beautiful thing in the afternoon sun, despite the unfortunate what-were-they-thinking coat of gold Rustoleum, now pocked with the poundings of a thousand clanks and tings and clangs---the line of rocks on the stand are testament to countless liftings and steadyings as each of our little ones chooses a rock, a lock, a stick, a toy, and makes music on the bell. Those faces of joy in the music, the testing of spots which sound different tones, different notes, the chipping away of that awful, incongruous paint which is aging into something like a beauty of its own---those are a delight and a treasure in my days.
I've learned that a bell has a body, a head, a neck, ears and eyes, a mouth, a tongue---all the better to sing with, my dear.
If you click to enlarge, the writing on the support reads: The C. S. Bell Co. Hillsboro, O.
And on the reverse, December 1941. I like to think this was the last bell made before the company turned their metal-working tools and materials to the War Effort. There were only five work-days in that fateful December before Pearl Harbor, and perhaps mine was the last to be formed, to cool and roll off the line to take its place in a peaceful churchyard, calling the faithful to worship and prayer in the dark days of WWII, and clanging out the news of Peace when all the fighting stopped.
We ring it for occasions---Fourth of July or other joyful times, and for other, more solemn moments---school tragedies or other markers of mourning; we go out, as many of us as are at home, and ring the bell. As when the Virginia school lost so much of its bright promise one ordinary morning, we all went out and rang the bell.

The "test" sirens sing out every Friday at 11 a.m., so just as the wailing wound down, we rang the bell 32 times, one for each soul gone too soon. Ringing the bell its own loud GONG by swinging is quite a feat, so we have a nice row of softball-sized rocks sitting along its ledge. DS and I each took a rock, and as the siren-song faded, I hit "Bong." As if we'd practiced like an honor guard, he counted silently, with tiny nods of his head two, three and he hit.
It went on, each of us doing our little count-nods and the other two standing in respectful silence, as the bell resounded in turn for the entire 32 notes, ringing out through the neighborhood, drawing out fence-friends from both sides and singing in the clear morning air. I hope that some family's hearts were lifted in that moment as the clear round notes lifted into the breeze.
Posted by racheld at Friday, October 09, 2009

What a neat way to learn that different instruments make different sounds...even if all striking the same thing. It reminds me how a group of people all seeing the same incident will see different things because of the eyes they were looking through.
I would imagine there re many memories attached that that old bell in all the children's hearts.