Sis and I were texting about the “firehouse salad” Daddy used to make, and just talking about that old familiar rich tang sparked so many memories for me.  The local firemen used to have a big fish fry, or a barbecue, or just a big “feed” to raise funds or salute a retirement or for some charity event.   And Daddy made the salad for every one of them, for years.

The salad was always composed in little steps.   Oil first, to coat all the cut-up iceberg and radishes and onions and bell peppers and tomato and sometimes celery.  Daddy flatly refused to let me wash the lettuce for this, saying the oil wouldn’t adhere---I’d peel off four or five leaves, just to kinda get inside where maybe dirt and germs hadn’t got to.

And you know---I’m not making this up, nor am I taking credit for something not mine, but I’m the one who made the first of these salads.  Just barely a teen, I was just prinking around in the kitchen, and we had sorta a bland supper going.
I remember putting cut-up tomatoes in the bottom of that old salad bowl and giving them WAY more garlic salt than I should have.   Juices all started forming in the bowl, and I glugged in some of the vinegar and a bit of oil and tossed it, then tossed in all the other cut vegetables.

It was mainly because Daddy’s friend Joe was there for supper, and he’d told stories many times, of being a POW in , and they barely had anything to eat but dark bread and some kind of broth or beans.   They had a guard who would smuggle them in some salt in his handkerchief, and sometimes a whole head of garlic from home.  They would each take off a little toe-clove and hide it. 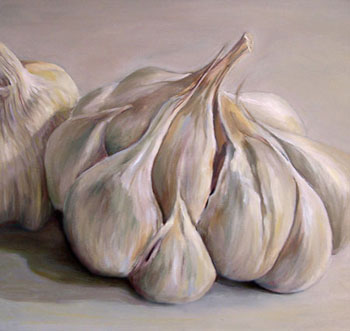 (VERY STRONG VIVID MEMORY HERE):
Mr. Joe would pantomime how he’d eat that precious small bit of flavor, keeping that little toe going for DAYS.   He’d pull his lips way back from his front teeth and nibble the air like a tiny mouse, showing how he’d just have a teensy nip of the stuff to satisfy the craving for something bright.  (I think I told Sis that I think this would be too strong a visual for putting into the story).  I’ll leave that to you.

Anyway, he absolutely LOVED that salad with all the vegetables and sharp vinegary garlicky taste, and after we finished, he took slice after slice of “light bread” and ran it around in the juice and ate it folded over like Daddy liked a Mannaze sandwich with his meals.

They all liked it, and Daddy made it that way as Firehouse Salad all the rest of his life.

This is a wonderful post and memory.
There is nothing better and sweeter than the combination of food and family.
Thank you!
Laura
White Spray Paint

Sounds good to me. I miss garlic and things... Nice memory of your dad, with love Janice

I love big salads like that! I a huge one for a birthday last week.I love making them and eating them....but not cleaning up the big mess I make in the process! ha ha LOL

What lovely gifts all around! You gave Joe the surprise thrill of an intensely sensual food-moment. You gave your dad a recipe. And they gave you a precious memory.

And sitting here at my computer at 7 AM, you have now given me a yearning for something garlicky!

So funny to think that my own father used to be in charge of salad in our household, and made one very similar to your father's, celery and all!

Such a special memory, and so many of our memories involve wonderful food shared with family and friends. This made me remember that my mother always made radish roses, and I still do the same thing.♥