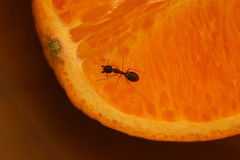 
Several years ago---quite a few years, actually, for it happened in the house-before-this-one---I sat dreamily one afternoon in front of the sunny windows of the den.   I’d had a languid few hours, for it was almost Spring, with the windows open and the scents of earth and green coming in.   No one was home but me, and the time was spent with seed-and-flower catalogues and pretty garden magazines promising new life and colour.

A tiny movement---microscopic, almost---down on one of the spread-open magazines I’d dropped on the floor caught my eye, and I took a closer look.   Way down, almost fallen into the chasm of the splayed pages, was a little black ant---not the tee-ninecy little fly-speck caravants which haunt countertops and picnics in long-stretching convoys, but a good sized one, perhaps as long as my pinky-nail is wide.   She sort of lay there, inert and antennae stilled, not moving when I got down on my knees and carefully lifted the wide-spread magazine by the two far-apart edges.

I set the book up on the table in the sunshine, waiting for her to move or scramble away, but she just lay there on her side.   Somehow, my imagination conjured that I was seeing her slow breaths, in and out, like a sleeping baby’s, despite the knowledge of thorax and abdomen and chitin and all that natural armor to make that impossible.   Plus, would an ant conceivably stop and stretch out for a nap in the midst of her life-long scurry and hunt?

But I just KNEW I could see her breathing.   And having swept up many a dessicated spider and bug from inside vases and glasses and from windowsills, I wondered if she might be dying of thirst in that huge unbroken wilderness-desert of carpet.

I reached for one of the sections of orange I’d been eating, broke it apart, and separated out one of the tiny elliptical sacs from inside---a full, fat one, ripe and brimming with juice.   I carefully laid it down, touching her mouth, and sat and watched.   In a moment it was as if you’d put down a slice of steak in front of a sleeping pup---she stirred a bit.  And if I could ever wish I’d had a film of a moment which didn’t concern family or children or our own important events---that would have been the time.

I could actually SEE the little bag of juice start to deflate like a squeezed bota, as her sides began to swell.  She drank and drank, with me debating whether to offer another helping.  And then, she got up, plump and refreshed, and I could SWEAR I saw her clean her little face before she started to walk off the page.

I picked the magazine up again and did one of those little keep-moving-the-book things, to be sure she stayed on there as I walked her to the back door and out onto the grass, where she disappeared down into that immense forest.

That was simply one of the oddest, most fulfilling moments of my life, and I hope she made it home.

It is those moments that speak to me too.

Thank you so much for your visit to my blog and your comment .

This was such a sweet story, my friend. Full of your wonderful train of words snaking across my mind! "The smell of..." rminds me how ready I am to sit on my porch and smell that again. It has been such a long fall and winter here in South Alabama. Doesn't sound right to say that, does it? Well, I had SNOW in my front yard for two days! Brrr!

Wonder what story that ant told when it got back home with all the other ants(aunts) and family? "I was so tuckered out running cross carpet, that I fell...right out in the open...and could not go another step! Then the heavens opened up and down poured the most wonderful tasting juice. And, it revived me quickly. Suddenly I was floating through the air, the BAM...back down in God's green earth I found myself! And, I scurried home."

Forgive me for taking liberties with your post. Obviously, it touched me. How often have we missed moments as special as this one because we didn't stop and SEE?

I should always proofread before clicking PUBLISH. Obviously, I didn't before. Don't even know if that made sense...and I totally left out letters. Sorry.

I love this story, Rachel - I just told Mike & Jessie "only Rachel could tell a story about reviving an ANT and make it compelling!" And Tonja's "Rest of the Story" is hilarious!

I like this so much. I'm glad I'm not the only one who stops to give snacks to insects (metaphorically).

Thank you Rachel for the sweetest story about what most of us consider a pest. It was like giving life to someone significant. I couldn't stop smiling while reading your life saving story. I also enjoyed Tonja's take on the end of the story. HA!

I have a feeling I will look at ants from a different point of view from now on. Yikes.
Love, Jeanne