THE THROWS OF CHRISTMAS My dear online friend Kat just said on her blog that she had boxes and decorations and glitter in every room of the house and was in the “throw” of decorating (quotes hers) for Christmas.
That one brought a smile---for first I thought of her lovely home, always perfection, always beautiful and neat, with all those cardboards and cartons and spills of sparkly stuff---probably the only clutter allowed to grace that well-ordered space all year.
THEN came the remembrance:   My first SIL and the ICICLES!   We used to buy those little flat packs of the thin-thin shredded aluminum/lead foil, to be draped onto the limbs of the tree to represent silvery, quivery shards of ice.   They came in a slim flat box, were thinner than tissue, with a dull gleam, and, since they were probably a foot-and-a-half long and folded in half around a little shirt-cardboard for convenience---they fell apart at a whisper, leaving you with a little mingy half-drape across the limb. 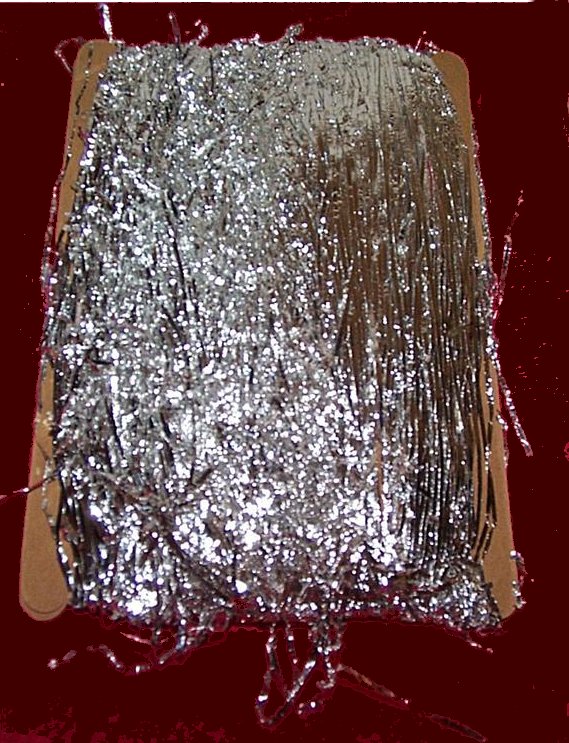 We’d separate carefully, taking them out one at a time---sometimes one person taking out and holding out, and the other gently removing the strand and laying it over the limb.   There were several camps on the decorating front:   Ours had careful one-string placement amongst the green, like this:

photo from jillsbooks
There were the ones who believed in decking the limb-tips only; the lavish grab of several, with the centers welded together by the pressure, placed around amongst the ornaments, and the one person I ever saw who loved the forest primeval look, and so grabbed them by the very end and squeezed an inch or so around the branch, so that they trailed down long and smooth.

And then there was SIL’s Method.  She believed in making it “look natural”---as natural as a lead-encrusted evergreen could look, with big handfuls tossed upward toward the tree, so that they fell as nature would have intended, had the skies showered great Pern-clumps of metal strings.
Whatever hit, wherever it hit---that was the intended spot.   And whatever landed on the floor was picked up, gathered into another, messier handful, and given another shot at it.  The whole thing looked like droves of drunken spiders had been spinning droopy, disconnected webs all up and down the tree.  Great bare spots were flanked by big ole crinkly wads of the things, and whole sections dropped their unbalanced little burdens onto the carpet, the tree-skirt, and all the presents below.
And family lore still has it that you could set the Christmas Day clock by SIL’s front yard---the minute she licked the last scrape of Sweet-Tater Pie off her fork, she’d head home, and in a bit there would be a green mound out by the garbage pickup site, winking silver twinkles in the sunshine before the rest of us could finish the Dinner Dishes. 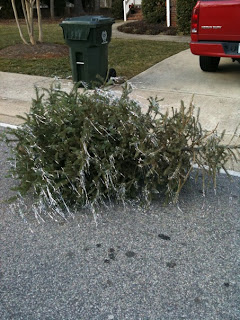 Did you ever use these?  What was your application method?
And someday----SOMEDAY---when I get to know you better, I’ll tell the story of our very first Christmas here, and the very interesting decorations on the perfectly-good little tree we pulled out of the Dumpster the week before Christmas.
A HAPPY DECEMBER TO EVERYONE!!
Posted by racheld at Wednesday, November 30, 2011

Oh what FUN Christmas tree decorating memories your post evokes!! We always had silver tinsel on our tree, growing up, and mama was very quick to manage the methods by which it went on the tree. All four of us girls wanted to have a hand in the tinsel application, but the younger we were, the heavier handed we were with it. My mama insisted that no more than two strands of tinsel were to be placed together and it needed to be evenly placed around the tree, from top to bottom. How hard I strove, as the oldest, to make the tinsel pretty. But the lower down the tree you got, the more likely it was you'd see little 'clumps' of tinsel, lovingly placed! Sweet, sweet memories! :)

Why does life move on so fast?
Great post!

That old tree shot is the only tree we had back in my young life. I still would prefer that part of the past. Things are too commercial now.

We used tinsel when I was small-each placed on one by one.I wonder if I can find some, I think I would like to use it again.

Icicles..... a really nice memory. As kids we were allowed to put them on, one at a time. But it didn't take long before we tired of the discipline and started dragging two, five, twenty across the branches. Mom would attempt to reign us in and then would tell us to just stop, that there were enough and she'd fix the ones that had too many. By the next morning the tree sould have an evenly distributed sheen. How those icicles picked up the hues of those oversized colored lights, and splashed little drops of color across the room!

(And thanks for the McCaffery reference. I might have known you were familiar with Threadfall. Did I tell you that my first online screen name was Ruatha?)

This is from an e-mail just now from my old friend Jon in Mississippi---I just sent him today's post, and I thought he might remember the days of Icicles. He's been having some vision problems, so I use extra-large printm and I told him to delete after reading so as not to fill up all his space with my flurry of words:

Rachel,
Never would I even think of deleting anything you sent to me. Your words are very special to me and worth saving. Thanks for sharing this e-mail with me, and thanks for using large fonts since my vision is so poor these days.

Yes, I remember the Christmas tradition you wrote about with such delightful humor. I love your way with words....truly you have a gift with them. I am so glad you have created a blog that your children and grands and many others will be able to read and enjoy far into the future as long as cyberspace exists (which I assume will be forever). You are so generous to put your memories into a format to share with others to enjoy and treasure both now and far into the future. How I wish some of my ancestors had written diaries or journals of their lives and thoughts that I could read and enjoy today.

It is a delight to hear from you. Thanks so much for this e-mail, and keep them coming! Hope your holiday season is very merry and all that jazz. Just throw or drape some more icicles around.

And thank you ALL for your memories and comments.

Hi sweet friend! Oh yes, I definitely remember members of my family using those foil icicles. What a mess! I think we were still find "evidence" of Christmas until almost summer. LOL I've had several fiascos with my tree this year. Lord, give me strength! I'll write a post about it once I get caught up a bit.

All those styles, at different times! The child is responsible to making sure none is on the floor when we finish, so that the cat doesnt eat it.
Loved this post. Am now in the throes here of preparing to bring in a tree tonight, and hauling the ornaments out of the tiny bit of under-roof storage we have. Merry happy - the getting ready is much of the fun, no?

The best part of those old metallic tinsel strings was laying them on the train tracks to arc and spark. Probably lucky that we didn't burn the house down.

YES! Icicles are EXACTLY what I imagine Threadfall to look and act like!

My daddy was the ultimate icicle man - boxes and boxes of them - all hung individually with a step back and a Picasso-like tilt of the head (stopping just short of making a frame with two thumbs and forefingers)to see where the next one should go. It didn't go on for hours, but for DAYS. Momma admits to tossing on clumps, so that he would finally get fed up and chase her off!

Yes, I do remember the icicles. We had to switch to artificial trees when I was about eight years old because of allergies. But, prior to that I remember icicles. My mother always applied them because she was a perfectionist. Even though I placed some, I know she changed them later.

Such a fun memory, Rachel.♥