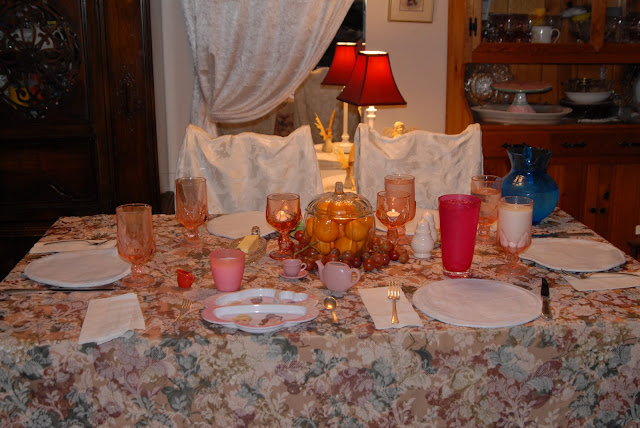 Thanksgiving was a quiet, homey day, with two slow, gentle days of getting-ready, of getting out the cloths and the goblets and which-bowl-for-what, knowing full well that the snap beans would go into Mother’s silver-rimmed little Harmony House bowl, as always, and the chocolate chess pie into Mammaw’s old chipped Homer Laughlin pieplate, brought out just for the honor, once a year, like an old faithful servant still asked to fumble a dish or two onto the table, because of their splendid service of the past.

Somehow, when I took out the two tablecloths, a sorta pinkish tan, with deep shades of fruit and flowers, bought at a yard sale several years ago for two dollars apiece, I just automatically reached for the heavy old pink goblets.   After all, they would GO, and I DO have five of them, and there WERE five adults.   Besides, the dozen bigger, older Mammaw goblets we usually use were snugged WAY in the back of the shelf, with a little sherbet dish nestled into each, to make space.

And so, Our Pink Thanksgiving table came to be---even a last-minute prink by our Sweetpea, who gently re-arranged the silverware and made sure the tea things were ALREADY set and waiting---well, those matched just dandy, too.

The plates were heavy burgundy crockery, handed round hot into our napkins after we sang the Blessing, and we had most of the old favorites from Mammaw’s and Mother’s tables. 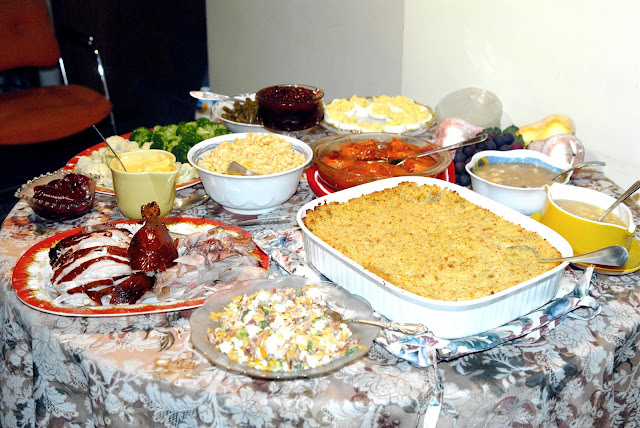 The fresh-snapped beans, “canned” the day before by my first Mother-in-Law’s recipe of vinegar and sugar brine, then drained and cooked down low with onion and bacon: 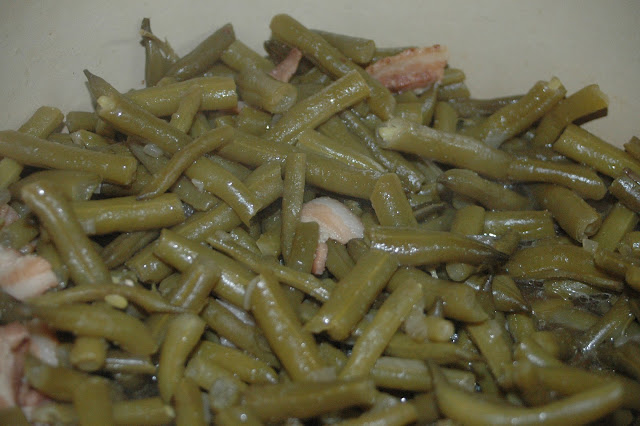 The cornbread dressing, rich with Caro’s homemade chicken stock, studded with tiny mince of onion and celery, with the Mammaw's Kitchen scents of sage and black pepper. Two kinds of gravy peeking over the top. 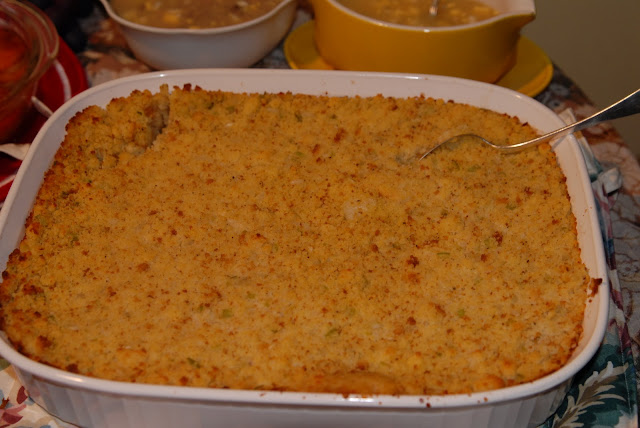 The sweet potatoes---not our usual custard with marshmallows, but the tiny “patties” usually only available this time of year in the “meat” aisle.  They were layered into a buttered dish and a thick-reduced simple syrup of brown/white sugar and vanilla poured on before baking.   They were still bubbling heartily when they were set down on the table, and were one of the favorite dishes of the day. 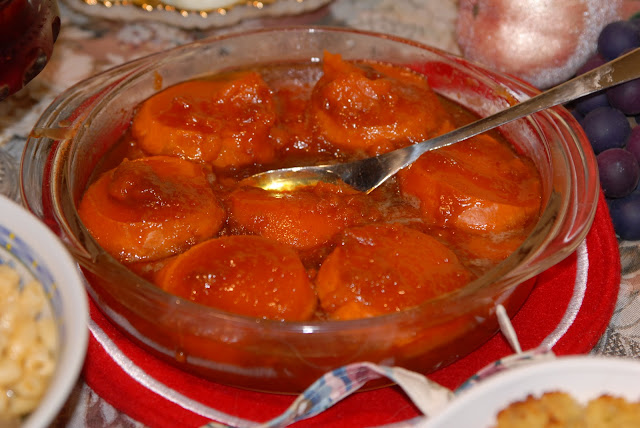 A simple plate of steamed broccoli and cauliflower, with a little dish of cheese sauce beside, and Sweetpea’s Mac and Cheese. 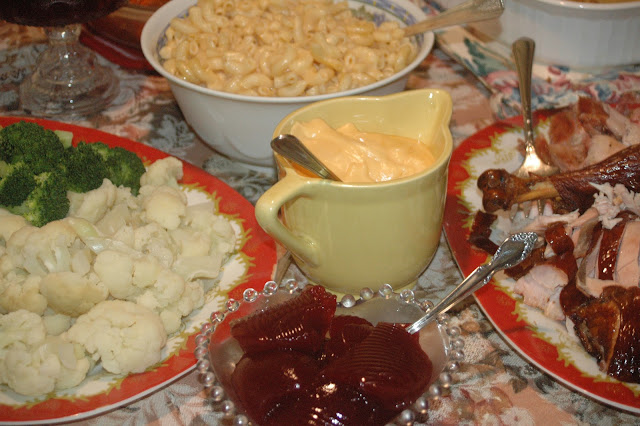 Of course, the devilled eggs, the two kinds of cranberry---one homemade, the other the standard Ocean Spray, with the little can-pleats still showing, and a dish of DDIL’s famous (and that is literal---people call and want that recipe every year, and Sis says it’s become “her” family tradition in Texas, as well) broccoli/cauliflower salad, with bacon and cheese. 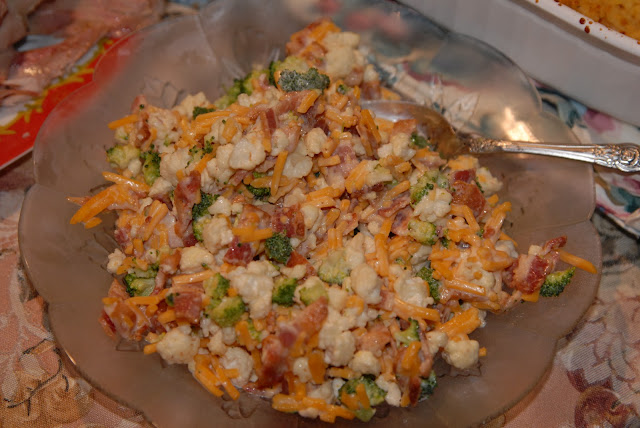 And that gorgeous ---brined and then cooked in the just-so-regulated grill for hours that morning, to come out with the burnished mahogany sheen of a well-loved Camaro. 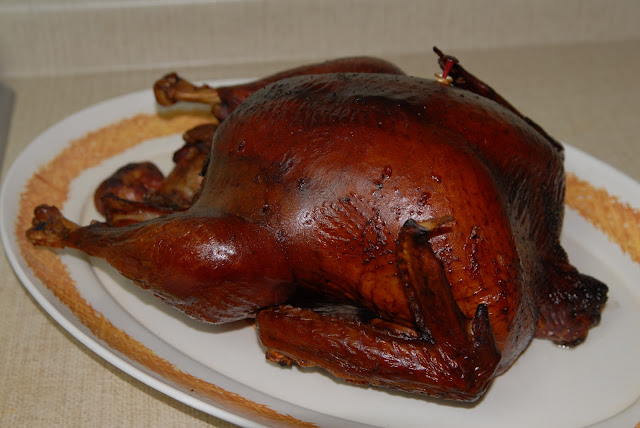 Shining and magnificent---the drumsticks just woggled around in the crisp skin, and came out warm and juicy: 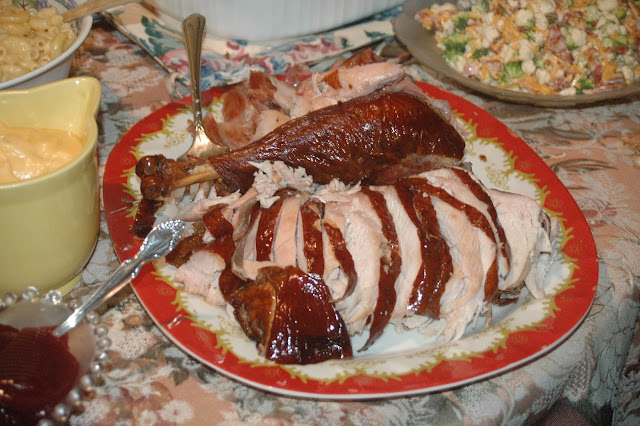 There was cheesecake with cherry sauce, and a Chocolate Chess pie, and we finger-ate all the big ole grapes out of the centerpiece.  After most of the dessert things were cleared, Sweetpea started handing round all sorts of percussion instruments:   A tomtom, a small drum, a tambourine, plus the two sets of drumsticks and odd items for striking:  She gave Caro a drumstick and a small pastry-brush from the drawer, and my big ole melmac cup “drum” was presented with a wooden spoon, so I licked my pie-fork clean and we started up the Rhythm Band.

We sang and tapped and bammed, and perhaps it was because I was getting so tired and turkey-lethargic just sitting there at the table for so long, but I started the TAP TAP KNOCK!  TAP TAP KNOCK! with all of us adults joining in and then coming in right on cue:   "WEEEE WILLLL, WEEEE WILLLL ROCK YOU!!" to Sweetpea’s bewildered, then delighted face.

Oh, my.   Don't know the words, and never much cared for a rappy style, but nothin' like some seventies Queen to set the tone for nice genteel people, after a lovely repast, rockin’ out and banging on the crockery.

After we wound down with THAT, she wanted the “Kitchen song” which I quickly realized was that twangy version of “You are my Sunshine” on the O Brother soundtrack---I sometimes play the CD on the Bose.

When we all got up from the table, it was like my dream of Holidays---like the scene in The Big Chill after the big dinner, when they’re all rockin’ to music and dancing in the kitchen as they clear away the dishes and put away the food.

I hope yours was wonderful, as well.   I'm moving SLOW, but after this good family time, and yesterday's long hike, I think I'm back.

Everything looks so yummy!

What a lovely spread!! I'm hungry all over again after reading through your post!! :)

What a perfectly wonderful day, Rachel ... and Norman Rockwell himself couldn't have painted it any more beautiful than your words did. Thank you for sharing it with us. I'm so glad "you're back!"

Sorry ... I can't stand to leave a typo -- make that "beautifully," instead of "beautiful."

What a wonderful Thanksgiving you had with your family. I laughed out loud about the pleats in the cranberry sauce, which I much prefer to homemade.What memories you all made for Sweetpea with your impromtu rock band!I am thankful that I get to enjoy your wonderful stories.!

Oh Rachel, I felt like I was there eating the yummy food and banging on the crockery after being sated with delicious food. Your description of the traditions of your family meal on Thanksgiving was very charming. We too use my mother's dishes and certain recipes that have been our family traditions as long as I can remember. Traditions that keep our memories of loved ones current like they too were sitting at our Thanksgiving table. It is so meaningful to keep these family traditions going. We always write the menu by always identifying the originality of the dish or recipe. RE: grandmother's fruit salad, Grandma Coulter's sour cream raisin pie, my mother's dishes, Diana's sweet potatoes, Aunt Deenies pumpkin pie. etc. etc. etc. A wonderful way to remember loved ones. Your story just made me think of this and wonder if we are the only ones who do this. I would bet not.Smile.

I am so glad your Thanksgiving was a blessing to you all. Your lovely family events written with love to share with us, is a blessing to me.
Love, Jeanne

Oh, my dear! That sounds like the pinnacle of Thanksgivings! I know that it was no less frantic and busy and time intensive than any that I've ever had and yet, I think that you and yours got beyond all that and TRULY celebrated the holiday. Your family has a gift for really living the moment. I really admire that. There is such a wonderful sense of pitching in, of joy in one another's company and a deep appreciation and thankfulness for all your blessings. If there is any better way of observing Thanksgiving, I don't know about it. Thank you so much for your generosity and love and hugs to your dear ones. Your friendship and the caring you bring to Lawn Tea were among the things I was thankful for this holiday and every day.

Oh, I feel like I had another Thanksgiving today, just reading your post! And, it sounds just delightful! I think it is the sameness in the menu and the dishes and the traditions that make it so very special.

I think memories have a way of hiding somewhere in the deep areas of our brains. And, then something brings them around again. I'll just bet that one day, SweetPea will be reading your blog and come to this post...and something will jar that memory. She'll hear that famous Queen song and run to look up the words. ' What a cool Grandmother I have' she will say. And, I will attest to you, right now, Sweet Pea, you surely do!

Now that's what a love to hear! :) I am so glad you had a "bang up" Thanksgiving. Ours was great also. This is such a great time of year, isn't it?

How very lovely to hear from you all, and to hear that you had good holidays, as well. It's still a bit busy here, and I'm trying to put together a little bit about our LONG hike over the weekend (it's hard to imagine, now, in this sleety freeze, that I left my coat in the car and strolled for hours in T-shirt and cotton pants).

I'm always SO glad to hear from you all, and bid a warm welcome to our newest member tammyj!

I am only just catching up on my web travels in the midst of the weeks of chaos here. Your tale appeals like a campfire story on a chilly night -- the listener gets lost staring into the flames or off into the darkness, seeing neither as the description of table and diners becomes the more "visible." So nice to hear that the holiday was joyous and full of family!

Rachel, I can imagine it all. And, I love every minute. The food sounds delicious and looks scrumptious. I have those "special" appearance dishes to use, too. My grandmother's deviled egg dish and cranberry dish always make a Thanksgiving appearance.

I've been sick with a terrible cold and cough. This is the third week, and I am slowly getting better. Now my sweet husband has it.

I wondered how I would prepare Thanksgiving, but my three cute guys (husband, son and grandson) became my assistants, and we had great fun.

I hope you will join us every Pink Saturday during the holidays as we celebrate together.