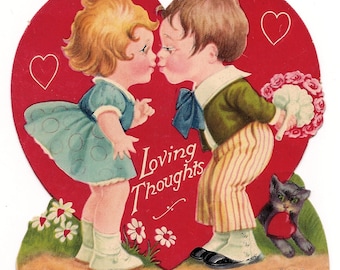 Young and sweet and innocent as these small images are, this must have been an ADULT Valentine, or at least meant for teenagers, when I was of the send-one-to-every-person-in-your-class age.  If we first, second, third graders had come to school with such a racy message in hand, ready to stash it in the big red box covered just that week by our busy hands in construction paper and streamers of crinkly red crepe, we, as well as the object of our momentary affection, would have been teased beyond bearing.   It was absolutely NOT DONE to verge into romantic territory at our tender ages, despite the heart-strings of the holiday.  You'd have been hearing about tree-sitting and K-I-S-S-I-N-G til the cows came home. 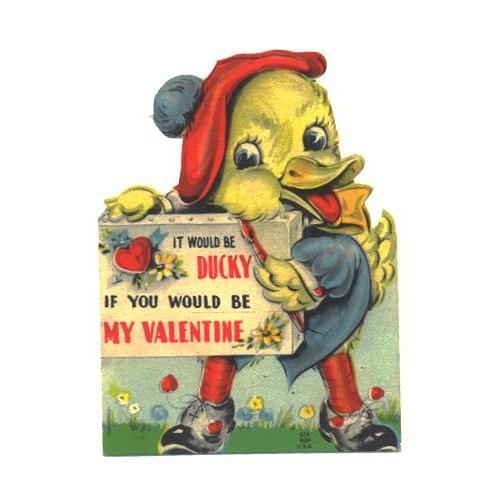 Our little twenty-for-a-quarter packs of the small bright die-cut sentiments were painstakingly chosen for just the right person, though the lack of variety at Leon’s Drugstore limited us all to buying identical crinkly red cellophane packages, with perhaps five designs total. They came in small swinging rectangles, hung from the neat hooks on the SUNDRIES aisle which at other seasons might have held corn pads or cards of needles, and the Valentines were cushioned in a thin grey cardboard frame, like the cut-off bottom of a small cheap box.  The whole thing was sealed in a thick, almost indestructible sheet of cellophane impervious to most fingers and even our blunt-nosed scissors, though we were not above employing a quick nip with two eye-teeth to start a little slit for tearing. 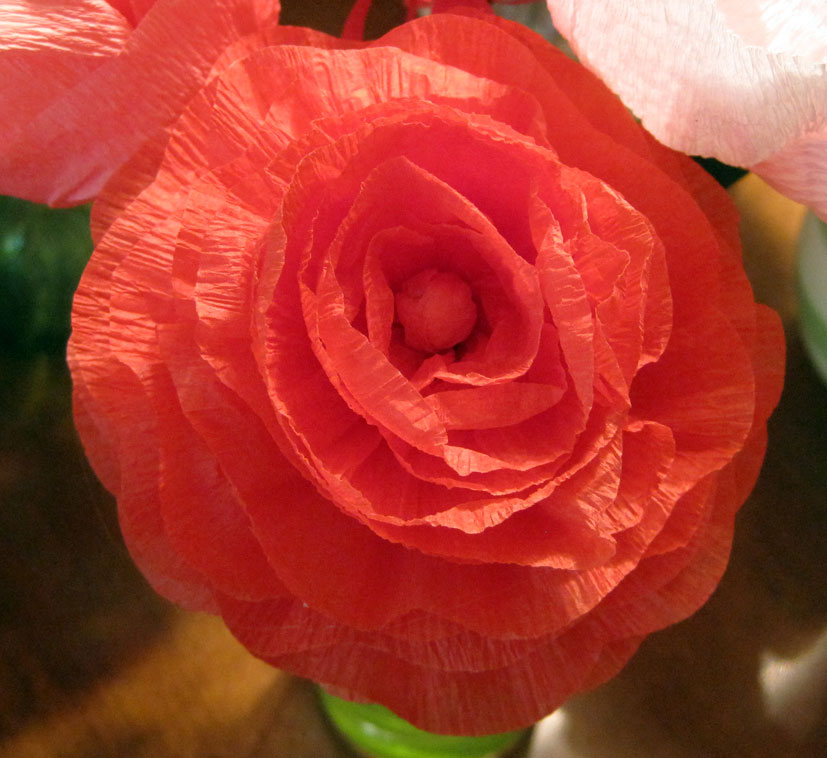 I assume there was an unwritten law that you HAD to write out your Valentines the night before, for I cannot remember any earlier contact save for the buying, though I was known to lay them out like a gaudy game of Solitaire on my bed in the days before, choosing the receivers by pattern or poem or whim.   I was also not above putting an unobtrusive small penciled number on the back, with a corresponding name on a line in my notebook, until I could make that final important decision.  I hope that I remembered to erase all those furtive numbers, for I fear that more than one of us knew that trick. 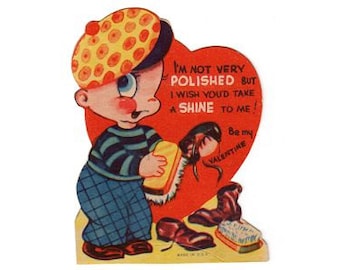 We’d carry our carefully-lettered little flaps of colour up to that big fancy box, inserting them one or two at a time into the slot in the top with everyone avidly looking on, hoping for a flash of their own names to appear as a card was slid into the box, or for the glimpse of a secret crush, revealed to all as the card disappeared between the ruffly overlay of the mail-slot.

Occasionally one or two of us would have had a splurge at the Ben Franklin two towns over, and might just have lucked onto a little cardboard platter from another company, with quite different pictures and quotes inside the red cello cover.  But most usually, when the giver-outer of the Valentines stood reading off the names, and we’d go forward and receive our mail, it was more like dealing out a big stack from a four-card deck, as the little sailor dog and the bird in the tree appeared over and over, interspersed with small Shirley Temple clones and windmills and mice.   But oh, the heart-pounding moments as you waited, heard your name, stepped forward with a trembly hand outstretched, and received another of the showy little slips.  I never looked at mine til the calling had finished and the teacher took off the lid to

see if any errant Valentines might still be caught inside.   I’d made sure that every single one of mine was safely clutched to my front like a nervous gambler, with the white side hidden so no one could see who did and didn’t send me one. 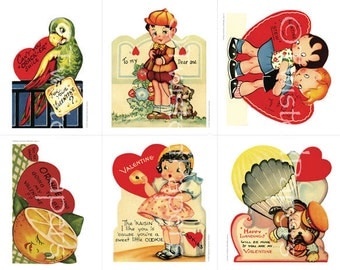 Being limited to twenty when there were sometimes twenty-five people in our class was no problem either, for quite a few of us girls would make special ones for a few good friends, all festooned in hand-cut little hearts still bearing the center-crease from the folding-to-cut, and with perhaps a little slip of a ribbon bow or some of that squiggle-ribbon which curled when you pulled the scissors blade down the length of it.   So we never truly left out anyone, despite the limit on “bought” cards, and I can remember only perhaps two girls who went around the room asking cattily, “And how many did YOU get” or crowing “Eye got Twenty-NINE!” when we all know perfectly well there were not even that many people in the class, and the handwriting looked mighty similar on at least five of them (and similar to HERS, at that).

Oh, for something so anticipated and pleasurable and fraught with delighted dread as those little cheap, primary-colored bits of childhood. Weren’t we innocent?  Weren’t we small?   I know I’m smiling. I remember it well.........
things are very different now aren't they?
We had Valentine Class Parties and after the grand exchange of the valentines we would have white frosting cupcakes liberally sprinkled with chunky red sugar and a big punch bowl of red Kool-Aid which the room Mothers scooped orange or lemon sherbert into. There were plenty of those teensy boxes full of the little candy hearts as well, the ones with the "sayings"on them, which we had such fun with!

We usually played one or two games as well.

Pants were not allowed at school, so us little girls would celebrate this big Class Party in our little plaid dresses with starched pinafores or maybe a plaid wool skirt or jumper with leotards on underneath so the skirts wouldn't itch our legs as much. We mostly wore "sensible" shoes to school but on "party" days some of us would show up in our shiny black patent leather mary-janes. If they had tiny little "heels"--you would feel so grown up!

Lord have mercy "leggins" had not been invented yet, and blue jeans were certainly not allowed in the school house! LOl Many years later, the school board finally approved the wearing of pants for female students-- UNDERNEATH little girls' dresses, on COLD DAYS only, to keep our little legs from freezing! ha ha LOL

Class Parties coincided with being the last two hours of the day....so when the party was over...it was time to go home. We boarded big buses or walked home if we lived in the neighborhood, eager to get home with our special valentine boxes clutched in our hands---to show our families what we got.
thanks for this lovely post......sure brings back so many memories!

You brought back memories with your comment and these pretty Valentines. I to remember those days of putting a valentine in each box at school with all our names on a box.

I did this too. Our valentines came on big sheets of paper and we would punch them out and then address the little white envelopes. Not everyone in my class got a valentine out of the box. If you weren't part of the "popular" crowd you might get just one or two. But my grandmother always made sure my sister and I gave to everyone so no one would be left out. She would say, "How would you feel?"

The giving out of valentines stopped in fourth grade. We were the "upperclassmen" on the second floor of the school and that was for babies.

Thanks for all the memories.

Can't remember a thing about it. I do remember the kid's valentines though. Happy virtual valentines Rachel.

Charming, as ever, and your story reminded me of my own daughter's experience in elementary school. All that, of course, is now over in high school. In England, we had this tradition at Christmas where all the class pupils would exchange cards. Valentines was strictly for romantic grown-ups and one always sent a card annonymously (they are never signed in the UK, or wheren't when I was growing up, so the recipient was left wondering who the annonymous admirer was).

Oh- Yes- I do remember those days. WE all made paper 'sacks' and the teacher had all the sacks on her desk and put the cards into them as they were laid on her desk. When all the cards were dispensed you got the sack you had made to hold your cards handed to you. We had very small classes (8 to 10 in a class)-little 3 room school house. So, you exchanged with the whole room.
I always felt sad if someone was left out and did not get as many valentines as everyone else did.
Great post. xo Diana

I had to come back to see if that little girl was a match to my Valentine header...it looks like the same artist, doesn't it? Those were all so sweet. xo Diana

This is such a sweet post and I love the vintage charm of the valentines. Enjoy the day.
Amalia
xo

I love Valentine's and Valentine's day. I collect vintage cards and decorations when I can. I dream of having enough time to make my own, but usually end up in the Hallmark store!